UPDATE: Or, never mind that! After the teaser was leaked online today, Marvel initially pulled the leaked video, only to shrug and release the trailer online a week early. In response to the incident, they tweeted, “Dammit, HYDRA” on their official Twitter page. You can check out the trailer on Marvel’s official channels, and various other websites now.

If you’ve so far been passing up Agents of S.H.I.E.L.D.’s (highly improved) second season, you may want to tune in next week. Marvel and ABC have confirmed that the first teaser trailer for monstrously anticipated crossover movie sequel, Avengers: Age of Ultron, will debut during next week’s Agents of S.H.I.E.L.D. episode on Tuesday, October 28th, which airs in its usual timeslot, at 9:00-10:00 P.M. EST.

Canadian viewers may want to try and tap into the ABC feed if they normally watch the show on CTV, as it’s unconfirmed as to whether or not CTV may also be screening the trailer during their airing of Agents of S.H.I.E.L.D.’s next episode. 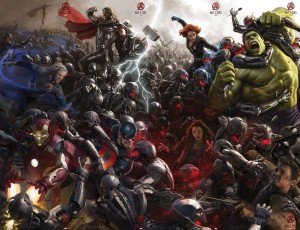 Avengers: Age of Ultron will reunite the Avengers, Iron Man, Thor, Captain America, The Hulk, Black Widow, and Hawkeye, as they take on a rogue peacekeeping robot, Ultron. After Iron Man invents Ultron to help the heroes reach a wider range of peacekeeping, Stark’s creation soon decides that the best solution to peace is the eradication of humanity.

The first bit of footage for Avengers: Age of Ultron was already shown at a sizzle reel from this year’s San Diego Comic-Con, It’s possible that some of that footage may be incorporated into the teaser. ABC did air the first concept art for the movie sequel last year however, during their Marvel Cinematic Universe featurette special, Assembling a Universe.

Keep assembling at Eggplante for all of your news and updates on the Avengers movies, Agents of S.H.I.E.L.D., and the Marvel Cinematic Universe at large.