After taking a week off, Brooklyn Nine-Nine returned this week with quite the surprising development at the precinct; A mole has been leaking confidential information to criminal syndicates around New York, with the leak traced back to the Nine-Nine. Naturally, Captain Holt panics, recalling that Deputy Commissioner Madeline Wuntch is looking for any excuse to lay the hurt on him and his department.

While most of the precinct is trying to root out the culprit, Sergeant Jeffords and Detective Diaz finally made their first push against the Giggle Pig drug epidemic. This served as the episode’s B-plot, which gave Jeffords and Diaz a much-needed team-up, given that the show rarely pairs the two of them together for a storyline. This is a big part of why Diaz being selected as the detective for the Giggle Pig task force was great, on top of the fact that she’s been given disappointingly little to do for most of this season so far. 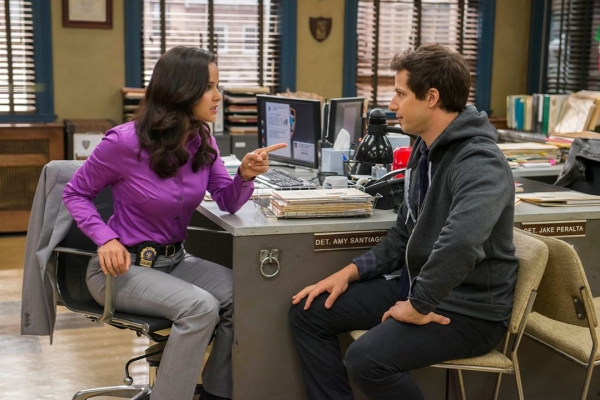 For most of the episode though, Holt took center stage, with Andre Braugher once again getting a fantastic opportunity to trade stoic insults with Kyra Sedgewick, who is fantastic as ever as Wuntch. Seeing the dialogue between these two feels like it will never get old, especially given how well Braugher still keeps Holt in character, even when he’s flinging the most childish insults that you could ever imagine from someone like him.

Another great moment with Holt involved Peralta inadvertently becoming the prime suspect due to his own predictable carelessness, as he’s apparently been hoarding case files outside of the department since he lived in his Nana’s former apartment that’s now owned by Gina. Facing suspension, Peralta has to call on Holt in the wee hours of the morning for a brainstorming session.

You know that any Peralta/Holt team-up is bound to be good, and this one was particularly hilarious. Given Holt’s strict sleeping schedule, it was very funny to see him out of sorts, yet agreeing to try and bail Peralta out of his own blunder by catching the real mole before Peralta could be punished the following morning. It was not only a good sequence, but continued to prove that Holt, despite his better judgment, still considers Peralta to be a valuable, irreplaceable member of his team.

Since Peralta had to fetch his stash of case files from Gina’s place, the showrunners also took this opportunity to have Peralta and Santiago accidentally walk in on Boyle and Gina having sex. The group just screaming in shock and disgust for a short while, before Peralta suddenly puts together that Boyle was lying about his ridiculous excuses not to hang out (i.e. singles’ pizza class), was hilarious stuff. It’s a bit out-of-character, sure, but perhaps it goes to show that Peralta didn’t think that Boyle had it in him to bed someone like Gina, so he never even allowed the thought to cross his mind.

Despite the big development though, the show threw a curveball in the sense that it could have made a big deal of the whole thing, but didn’t. The next day, Santiago tells Gina that once she got over the shock, she didn’t think the affair was a big deal, and that she thinks it’s just good that Boyle and Gina have found each other. This leads to Gina standing up on her desk and declaring to the entire precinct that she had the affair with Boyle, which she claims she’s terminating (yeah, right), and even went as far as to answer a few questions. The highlight here came when Gina said that the sex was, “Adequate”, which led to Boyle smiling, having finally met par with a woman. It was a nicely handled moment that felt like a victory for both characters, and one that thankfully wasn’t overblown, as that would have taken away from the potential credibility of Boyle’s and Gina’s relationship, which clearly makes more sense than one would think.

Shortly after, it was revealed that the whole mole probe was just a gigantic scheme by Wuntch to torment Holt. Peralta and Holt manage to outwit Wuntch and her Internal Affairs lackey though, agreeing not to release the evidence of Wuntch’s ethical transgression if she’ll simply back off of the Nine-Nine. It felt like the arc kind of fizzled out without much real impact, but it was nonetheless satisfying to have Peralta and Holt continue to be a great team when they put their heads together, while also leaving the door open for more Wuntch/Holt battles in the future. 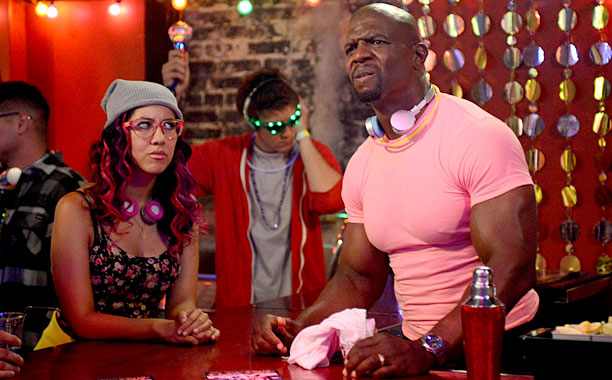 Over on the B-Plot, the Giggle Pig investigation didn’t make much movement, but the Jeffords/Diaz team-up still had plenty of laughs. The ‘Silent Disco’ that they visit, where everyone wears headphones as they dance to the club music so as not to create excessive noise, was as oddly creative as it was delightfully silly, especially when Jeffords and Diaz had to try and blend into it. It was also amusing when Jeffords, posing as a bartender, commends the good behaviour and healthy living habits of a young woman who went to his twin daughters’ school, but later learns that the woman is a Giggle Pig dealer, leading to him trying to badger the dealer about her life choices, and whether the school had anything to do with them, leading to more great laughs.

Not much of value was gained on Giggle Pig in the end, though the arc did conclude nicely with Diaz assuring Jeffords that he’s a great dad, and his girls will have a great future because of that. The writers really know how to pick these careful and brief emotional moments with Diaz, and as rough as she is, there’s something undeniably reliable and caring about her, which is why it makes sense that she’s been offered a leadership role more than once in the series. It’s probably just important that you don’t get on her bad side.

“The Mole” may not have had the earth-shattering resolution that some viewers no doubt hoped for, but it was still a solid episode with its share of chuckles. Not even the public revelation of Gina and Boyle’s affair shifted the dynamic of the show that much, though this simply leaves the best as yet to come.

Brooklyn Nine-Nine 2.5: "The Mole" Review
"The Mole" was a funny and reasonably clever episode that didn't have much lasting impact for the precinct, but made up for it with plenty of great jokes.
THE GOOD STUFF
THE NOT-SO-GREAT STUFF
2014-11-03
80%Overall Score
Reader Rating: (1 Vote)
83%