After a few problematic elements in the early episodes, Gotham really seems to be finding its footing now. Both “Viper” and “Spirit of the Goat” were very strong episodes over the past couple of weeks, and this week’s episode, “Penguin’s Umbrella”, continues to increase the show’s quality even further, delving more into the scheming side of its title character than ever before.

As much as this was another fantastic Penguin-centric episode though, this episode also marked probably the first truly interesting Gordon storyline that the show has had so far, which is great, since “Spirit of the Goat” finally made Bullock a more interesting character last week. Gordon’s actions against the mob bosses of Gotham City finally had real consequences when it was revealed that Gordon didn’t actually execute Penguin on the pier during the pilot episode, and as a result, there was no forgettable case-of-the-week somehow shifting focus away from that. Gordon is in real trouble, and it’s awesome to see how he deals with those stakes.

This means that the mob came back in full force after sitting out last week’s episode, with Fish Mooney being particularly furious that Cobblepot isn’t sleeping with the fishes. Pushing Falcone to go to war against Maroni, whom Penguin is revealed to be a snitch for, the two mob bosses appear to be in conflict, but, surprisingly, resolve things rather amicably towards the end. This could be a byproduct of FOX’s full season order for Gotham, bumping the Season One episode count from 16 to 22 due to the show’s positive reception, as it seems like the Falcone/Maroni war is cooling down significantly for now, to accommodate those added episodes. That didn’t stop Falcone from targeting Gordon though!

In order to bring Gordon in, Falcone sends in yet another Batman villain-in-the-making, Victor Zsasz, portrayed by guest star, Anthony Carrigan, whom you may already remember from portraying another DC villain, Kyle Nimbus/The Mist in the third episode of The Flash. Carrigan is given a lot more to do with the role of Zsasz than he was as Nimbus, and his Zsasz is a kooky delight, waltzing directly into Gordon’s police station with a pair of exotic female enforcers in tow, and simply politely asking for them to turn over Gordon. Gordon’s response is equally awesome, when he comes out to declare, “There are fifty cops in here. Try something”, leading to Zsasz getting every cop out of the office, on command, and starting one of the show’s best gunfights yet as Gordon is forced to try and survive.

The gunfight is very nicely tense, and spans a large portion of the GCPD building, with Gordon noticeably outgunned, and without Bullock to rely on, since Bullock initially tries to take out Gordon himself to exonerate himself with the mob, only for Gordon to gain the upper hand during the attempt. Barely escaping with his life, Gordon is bailed out by Montoya and Allen, though Zsasz still manages to kill an innocent cop that was in the wrong place at the wrong time, making a mark on his arm with a box cutter afterward, demonstrating that his trademark ritualistic flesh-carving habit for every murder he performs is already in place many years before Batman comes to Gotham City.

On the note of Montoya, it was cool to see her simply own up to her mistake and confess that her judgment was clouded to Gordon as they tried to lay low. It seemed ambiguous as to whether Montoya was an honest cop or not, though her attempt to make peace with Gordon after his wrongful arrest would seem to indicate that she’s another Gotham City cop that isn’t entirely crooked. Hopefully, the MCU can now be an ally to Gordon in episodes to come. This would appear to be the plan, as Gordon visits Bruce Wayne to tell him that, should he die in his attempt to take down Falcone and the mayor, Montoya and Allen will take over the case of his parents’ murder.

Trying to smuggle Barbara out of Gotham City and given nothing left to lose, Gordon enacts a desperate plan to arrest the mayor and Don Falcone, along with a slew of their men, getting signed warrants and everything, and even managing to get Bullock on board after he shows up drunk with a prostitute to Gordon’s apartment, believing he himself is also finished. Again, this nicely proved that somewhere deep under his rotten exterior, Bullock is still a good cop too.

The attempt doesn’t totally work out, as Falcone and Zsasz manage to snatch Barbara after she comes back to Gotham City against Gordon’s wishes, which frankly, felt a little bit illogical for her, but that was minor. The tense stand-off between Gordon and Falcone was still a great moment, with Falcone using the coercion of Gordon to trust his threat to demonstrate that Gordon needs to trust the influence of organized crime to keep the city running. It was one of the most intense moments that the show has yet delivered, and one that made Falcone an extra menacing foe for episodes to come. 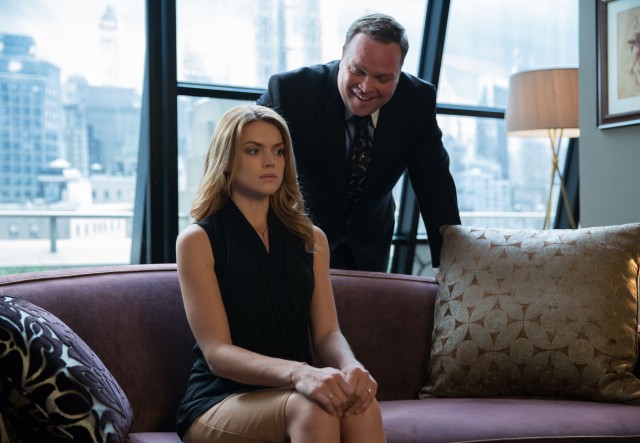 The best moment of an already superb episode was saved for the end however, when it was revealed that Penguin is actually a double agent, who was working for Falcone the entire time he was with Maroni. Not only that, but Falcone has been fully aware of Fish’s conspiracy to overthrow him this entire time as well, which is why he has simply left Fish’s femme fatale that she spent more than one episode arranging, to do menial household chores. It’s kind of hilarious when you really think about that. Thus, everything that’s happened so far has been completely according to Falcone’s and Penguin’s plotting. Wow.

On one last Penguin note, seeing Penguin trick and subsequently kill Maroni’s key enforcer, spouting a huge monologue about how a man’s passions are the best way to kill him all the while, was excellent. Robin Lord Taylor has never failed to own the part of Penguin throughout this entire show, but he really nailed this scene especially, bringing out more of the foreshadowed Batman antagonist to come than ever. Already, Penguin is becoming quite a dangerous force within the mob. Not bad for someone who started out by carrying Fish Mooney’s umbrella just a few episodes ago!

“Penguin’s Umbrella” is really starting to elevate Gotham into one of this Fall’s best and most interesting new procedurals, including both new and veteran shows. The mob war may be on hold for now, but it looks like Gordon’s troubles in Gotham City are still only just beginning.

Gotham 1.7: "Penguin's Umbrella" Review
"Penguin's Umbrella" ditched a case-of-the-week to showcase the best of Penguin and Don Falcone, and it was all the better for it, finally providing a worthwhile plot for Gordon's character.
THE GOOD STUFF
THE NOT-SO-GOOD STUFF
2014-11-04
90%Overall Score
Reader Rating: (1 Vote)
92%