Remember Free Birds? Probably not. It was the very short-lived Thanksgiving-themed CG comedy breakout attempt by Reel FX Creative Studios, an outfit that has almost entirely specialized in direct-to-video animated duds at this point. Free Birds was a feeble, unfunny waste of talent, and one could forgive Reel FX Creative Studios for slinking into the background, never to be seen in the mainstream movie market again.

But, that’s not what happened. Reel FX Creative Studios is shaking off their former failure, and instead trying their luck with a new CG kid-friendly flick, The Book of Life, themed around Mexico’s cultural Festival de la Muerte (Day of the Dead) on November 2nd, virtually the Mexican equivalent of Halloween. This time, Reel FX has brought in more muscle, with 20th Century Fox assisting with production and distribution, and with Fox also lending Reel FX a mighty producer in Pan’s Labyrinth’s Guillermo del Toro, who is currently assisting with production on Dreamworks Animation’s recent offerings.

Reel FX’s persistence in the animated film medium appears to have paid off as well, as The Book of Life is an enormous improvement over Free Birds, and is all-around a very pleasant, energetic and crowd-pleasing family flick. Reel FX has especially proven their panache with the actual animation end as well, making for a movie that actually manages to rival How To Train Your Dragon 2 in some respects from a visual standpoint, even if the story is a little more by-the-book, pun not intended.

Essentially, The Book of Life is one of the better movies that this October has offered, and definitely the best option for family audiences. If you enjoy fun and vibrant animated movies, you’d do well to check it out.

The Book of Life really is an age-old story. It begins with a trio of friends, two boys and a girl, with the boys sharing affections for the girl. Manolo (Diego Luna) and Joaquin (Channing Tatum) both have looming destinies ahead of them, with Manolo being pushed by his father into becoming a bullfighter in order to uphold the family tradition, while Joaquin must do his own father proud as a soldier. The two are even forced to abandon their shared love for Maria (Zoe Saldana), after her animal activism gets her sent to a nunnery. 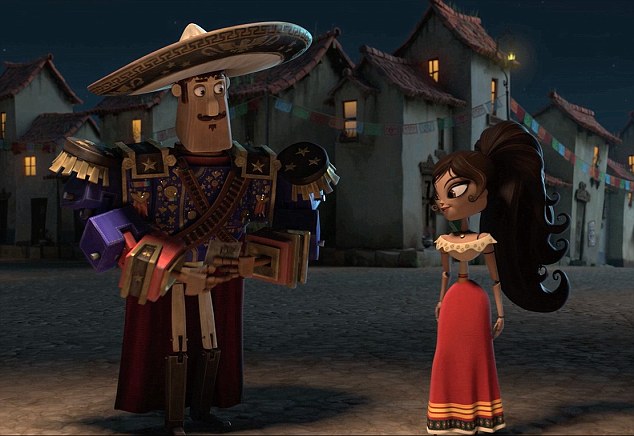 Manolo is the movie’s main character more or less, as Joaquin embraces being a soldier to become a strong, but arrogant local hero, and Manolo simply desires to live a more peaceful, free existence, pursuing his dream of being in a mariachi band. Manolo, in contrast to Joaquin, also becomes shunned by the local townsfolk of his village, San Angel, after he repeatedly refuses to kill the bulls he fights at the conclusion of each match, particularly after Maria returns to the village when the three reach adulthood.

From childhood, not only have their reputations been steered by their parents, but also by the dueling spirits (and lovers) of the underworld, with La Muerte (Kate del Castillo) and Xibalba (Ron Perlman) making a wager on which boy will win Maria’s heart. Since La Muerte rules the happy and festive Land of the Remembered, she bets that the good-natured Manolo will prevail, while Xibalba, ruler of the morose and desolate Land of the Forgotten, bets on the strong Joaquin, also going as far as to cheat, lending Joaquin the Medal of Eternal Life, which prevents him from being killed or injured in battle. If Xibalba wins the bet, La Muerte will have to switch places with Xibalba in ruling the separate realms of the dead, but if La Muerte wins the wager, Xibalba can never again interfere in the affairs of mortals.

The character archetypes are pretty basic in The Book of Life, and you can probably call all of their story arcs in advance. They’re still not without their charm though, and the movie does a throw decent curveball into proceedings when Manolo enters the Land of the Remembered, which was given away in the trailer. Fortunately, the verbal sparring of La Muerte and Xibalba proves to be a highlight, as is the occasional interjections by a peppy, hip museum tour guide, Mary Beth (Christina Applegate), who is narrating the movie’s story to a bunch of problem children on a school trip.

As much as the story of The Book of Life sticks to well-trodden ground in family movies, the lively cast is what really helps the plot come to life. Every character is voiced with incredible personality and charisma, so even when a joke falls somewhat flat, at least you’ll still smile, since everything is delivered with such gusto. Even with the perfunctory foundation, there’s no question that the movie is put together with tons of heart, thanks to such loveable voiceover work!

The Book of Life is a feel-good love story that will no doubt end exactly the way you expect it to. Thankfully though, this movie is about the journey, not the destination, particularly when it takes you to so many interesting places in its second half especially.

That said though, there isn’t much to say about the story that hasn’t already been done in so many other family movies. The theme of the Mexican Day of the Dead is the most creative thing about The Book of Life’s premise, but beyond that, the movie is mainly selling itself on charm and visual splendour.

Fortunately, there’s plenty of both. The story may be simple, but even in its simplicity, it at least never feels shallow, even if there nonetheless isn’t much to read into.

First-time feature director, Jorge R. Gutierrez both writes and directs The Book of Life, which is perhaps why the story really isn’t wanting to bite off more than it can chew. Even so, Gutierrez brings his passion project to life with aplomb, creating a well-paced and consistently engaging adventure about a cinematically-untapped Mexican holiday that will still strike a chord with audiences outside of Mexico. That’s no small feat for a first-timer!

Even being a small production, The Book of Life sounds with the fanfare of something more large and ambitious, akin to Dreamworks Animation or Blue Sky Studios. It defies its smaller budget and scale by feeling bigger than it is, yet still using that production value to create something sweet and striking. Maybe there’s not much to Gutierrez’s story in contrast to bigger-budgeted animated movies, but as the old adage goes, it’s better to do the simple stuff well than the advanced stuff poorly.

The Book of Life puts a clever twist on timely pop songs by having them performed in a mariachi style. Yes, it’s still a modern, pop-heavy soundtrack, but at least the movie tried to do something cute and funny with it.

Characters will occasionally use more recent songs for musical sequences that are reasonably fun, particularly given Manolo’s desire to become a musician. Done with equal doses of humour and heart, the movie’s soundtrack probably won’t age great, but at least it gives the movie some added fun and charm on the big screen.

As much as there’s little to say about The Book of Life for the most part, beyond the fact that it’s a fun family-friendly romp all-around, there’s plenty to say about the visuals, which are fantastic! Like I said, the movie may be small, but its visual panache makes it feel like something larger than it is, as the entire production is splashed with excellent displays of light and colour, and the exaggerated, hyper-cartoonish animation helps to give everything an even greater sense of vigor and energy, which children will no doubt especially have fun with.

The style of the character animation is also very unique and evocative, with the people in the movie resembling the wooden diorama dolls that Mary Beth is manipulating like puppets to tell the story. It’s a transcendent visual style that gives The Book of Life one of the most unique and memorable visual palettes of any family flick this year, or perhaps even the past several years, and it helps the otherwise archetypal personalities feel more memorable than they have any right to be.

The Land of the Remembered is a particular visual standout in terms of the environments as well, being one of the most bizarre and interesting CG movie landscapes in recent memory for animated movies. No matter where the movie goes though, it boasts no shortage of upbeat style, taking otherwise mundane concepts and turning them into outstanding realizations of big screen beauty!

Naturally, I saw The Book of Life in 3D as well, and that’s definitely the best way to view it. The 3D effects aren’t as obnoxious as you may think, given the rest of the movie’s hyperactive pace and tone, though they’re still well-rendered, and effectively enhance both action sequences and visual sight gags. It’s a flourish that doesn’t sink the movie if you simply opt to watch it flat in 2D, but the 3D presentation is nonetheless well-done, and enhances the experience considerably, It makes an already fun movie even more fun to watch, particularly for children, who will enjoy the added immersion and punch that comes with the 3D presentation.

The Book of Life is straightforward, reliable family fun. Its exceptional visual directing makes it especially great to view on the big screen, and in 3D at that, and it finally presents some reliable proof that Reel FX Creative Studios actually has the potential to make good mainstream CG movies. Sure, you could argue that the guidance of 20th Century Fox helped to realize this one, but The Book of Life still stands as Reel FX’s first feature film success.

People who are Mexican, or have a Mexican background, will probably get the most out of the experience, given that the movie celebrates a Mexico-specific holiday that has been pretty well entirely ignored in all other parts of Western culture. Even if you’re not Mexican though, and regardless of your previous interest in Mexican folklore, The Book of Life presents a highly entertaining way for both kids and adults to learn something about another culture. The tour guide narrator is an especially cheeky way to reference the fact that the movie could be taken as an educational film to a point, though one that actually does manage to be entertaining and fun, even if you don’t care about learning anything. 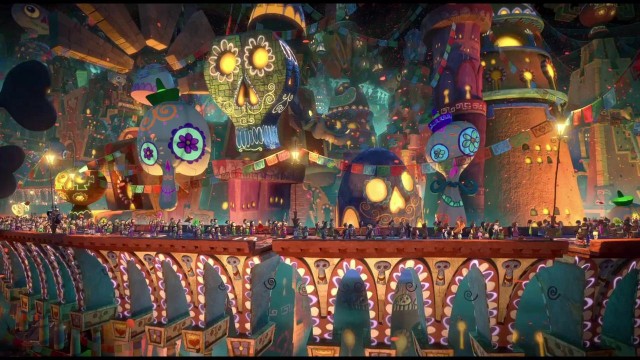 The story may be predictable, but The Book of Life is a fantastic way to put a spin on enjoying the Halloween season at the movies. After all, there’s more than one way to celebrate when monsters and spirits come out to play!

The Book of Life Review
The Book of Life spins a tale that any moviegoer has heard before, but still succeeds as a fun and vigorous animated romp, thanks to an energetic cast and outstanding visuals!
CHARACTERS75%
PLOT65%
DIRECTION80%
MUSIC & SOUNDTRACK70%
VISUAL EFFECTS95%
THE GOOD STUFF
THE NOT-SO-GOOD STUFF
2014-11-04
80%Overall Score
Reader Rating: (1 Vote)
100%