NOTE: Some mild spoilers from throughout the first season of, “Andor” may be present in this review. That said, the review is written to accommodate those who haven’t yet watched the series, and as such, will avoid discussion of major plot developments.

The short-lived A Star Wars Story anthology initiative didn’t exactly set the world on fire during the mid-to-late 2010’s. Ultimately only producing two movies before the initiative was abandoned, the former, 2016’s Rogue One: A Star Wars Story, at least managed plenty of critical and commercial success, even going on to gross over a billion dollars worldwide during its theatrical run. Granted, this would then be ruined by 2018’s following release, Solo: A Star Wars Story, which went on to become the franchise’s first box office flop, and its least liked release since the 2000’s-era prequels.

If there was one positive contribution that these short-lived Star Wars anthology movies made however, it was setting the foundation for the franchise’s eventual flourishing on Disney+. With The Mandalorian in particular going on to become one of the streaming service’s most celebrated and watched original shows, itself allegedly being salvaged from a failed Star Wars anthology movie pitch, it was clear that Disney+ could represent a significant do-over for these kinds of side stories set within the Star Wars universe’s current cinematic timeline. That includes the two anthology movies that managed to squeak into theatres, with Solo: A Star Wars Story said to be spawning a young Lando Calrissian-themed series in the near future, while Rogue One: A Star Wars Story has already produced Andor, a prequel/spin-off series centered around Diego Luna’s fan-favourite Rebel Alliance hero from that movie. 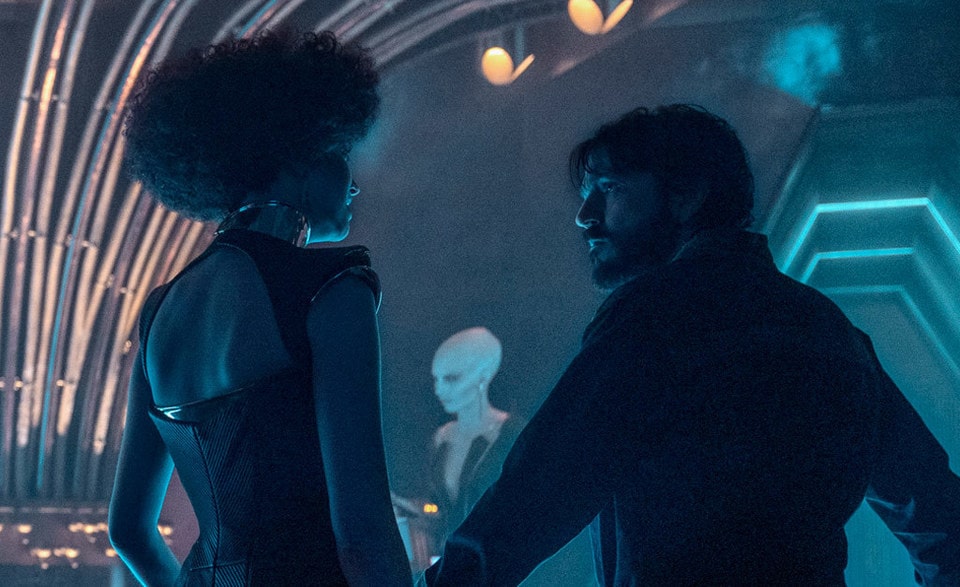 Cassian Andor, like pretty much all of the protagonists in Rogue One, ultimately perished during that movie’s ending, though he apparently had quite the journey to becoming the Rebels’ favoured captain during that fateful effort to steal the Death Star plans. Cassian was no hero during that time either. Starting out as a criminal and a killer, he spends most of Andor’s surprisingly robust 12-episode first season trying to duck the watchful eye of Imperial authorities, while hunting for his missing sister. Apparently, Cassian was adopted from an Imperial-ravaged planet called Kenari, raised by adoptive mother, Maarva, whose declining health sees her wanting to make one last act of defiance against the tightening grip of the Empire.

Andor is one of those shows that’s a little bit difficult to talk about in great detail, for want of avoiding significant spoilers. This whole season is a slow burn powder keg of budding rebellion, with pockets of action that gradually nudge Cassian toward his destiny with the Rebel Alliance, still in its infancy during this series’ events. Two other major players on this note are Stellan Skarsgard’s new Rebel contact, Luthen Rael, who forcibly recruits Cassian for a mission against the Empire early on, and familiar Imperial Senate member, Mon Mothma, reprised by Genevieve O’Reilly after her appearances in several previous Star Wars movies. This creates two major alternate perspectives to complement Cassian’s, with Mon struggling to maintain her integrity at the Senate while secretly funding the growing Rebel activities, while Luthen serves as the shady fixer that does what the Rebel heroes wouldn’t ever want to be caught doing.

On paper, the rather political narrative of Andor sounds like an unwelcome callback to franchise misfires like 1999’s infamous Star Wars Episode I: The Phantom Menace. Imagine my surprise however that not only is Andor’s first season positively riveting throughout its duration, but it may even surpass The Mandalorian as the best Star Wars project to come out of LucasFilm since 1980’s stellar Star Wars Episode V: The Empire Strikes Back! No, I’m not kidding! Andor really is that good!

This series is an unexpected master class in pulp storytelling, even managing to justify its first season’s extended 12-episode length without much effort. Andor finally makes Star Wars feel truly dangerous and treacherous again. That’s something that the franchise hasn’t effectively pulled off since its origins in the late 70’s and early 80’s, at least not in live-action. There’s a renewed sense of desperation among the Rebels here, with Cassian being an unwitting participant in a particular brand of great defiance that’s ultimately thrust upon him; Not unlike a young Luke Skywalker during Star Wars’ earliest movies. Sure, there aren’t any Jedi involved in Andor, and the Force isn’t really something that comes into play during this particular story, but this gritty, ground-level examination of the Rebels’ earliest acts of defiance nonetheless proves to be engrossing and brilliant.

It’s not just the Rebels either! We see these supposed hero arcs complemented exceptionally by a couple of additional perspectives within the Empire, specifically belonging to Kyle Soller’s Syril Karn, an Imperial Deputy Inspector that’s obsessed with capturing Cassian at any cost, as well as Denise Gough’s Dedra Meero, an Imperial security supervisor that seems to be the only one taking the Rebel threat seriously. Both Syril and Dedra present the most startlingly human take on Imperial agents that the franchise has featured in its current canon, as they put their very careers on the line in an effort to secure what they believe is the best path forward for the people they’re charged to protect. To them, they’re not working for the bad guys, and that makes both Syril and Dedra two wonderfully tragic do-gooders that just happen to be on the wrong side of a brewing galactic war.

Skarsgard is another easy highlight, on this note. Despite his character posing as a vaguely eccentric antiques dealer on Coruscant, giving him easy access to Mon Mothma and her own secret dealings, there’s nothing truly cuddly about Luthen Rael; He’s violent, uncompromising, and shares a fanatical devotion to the Rebels’ cause that’s on par with any Imperial extremist. Luthen isn’t even above killing innocents, or wrecking the lives of his informants, if he believes it will further the cause of destroying the Empire. One could thus make the case that Luthen is just another villain in Cassian’s and Mon’s midst, sometimes compelling viewers to cheer for the well-meaning Imperial agents that will nonetheless find themselves on the losing side of history eventually.

The way that Andor encourages new and old fans of Star Wars to dig much deeper into the Rebel/Empire conflict that served as the earliest narrative backbone for the franchise feels surprisingly bold, and even unapologetically grown-up. As much as The Mandalorian, The Book of Boba Fett and Obi-Wan Kenobi flirted a bit with the idea that this conflict wasn’t as black-and-white as we initially believed, it’s Andor that fully commits to flipping our perspective on Star Wars fully on its head. Suddenly, it’s difficult to tell whether the Rebels’ ends truly justify their means. Suddenly, it’s difficult to tell if the Empire truly is a universal product of pure evil engaging in a stranglehold against the galaxy. Star Wars history may be set regardless, but it no longer appears quite as clean and fantastical as it once did.

Indeed, one could easily make the case that Andor is the first live-action Star Wars project to be made exclusively for adults, despite the fact that it still maintains a youth-friendly rating. This series is definitely too gritty and cutthroat for young children. Its political and personal themes are proudly worn on its sleeve to boot, challenging viewers to draw their own conclusions about whether the heroes are still the same heroes, or the villains still the same villains. Cassian himself is merely a means to an end for now too, ultimately being moved by greater forces across a conflict that he currently has no interest in participating in. The dial has certainly moved a little by the end of this first season, as Cassian’s compounding compromises and tragedies eventually start to build him into who he was during Rogue One, but the real star of Andor is still its over-arching narrative, and its resolute willingness to challenge all of our pre-conceptions surrounding two of the most well-known factions in the Star Wars universe.

“Indeed, one could easily make the case that Andor is the first live-action Star Wars project to be made exclusively for adults, despite the fact that it still maintains a youth-friendly rating.”

To that end, I can also admit that Andor probably won’t be exactly to the tastes of every single Star Wars fan. Granted, I am hard pressed to think of any blatant, noticeable flaws that earnestly drag down these first twelve episodes, which easily stand as some of the most superb and complex storytelling in Star Wars history, regardless of whether or not it’s to your liking. Still, it is nonetheless true that some people may find Andor too grim and complicated. The surprising lack of an alien presence throughout the majority of this series’ storytelling feels especially distracting. Sure, it keeps lending itself to the excellently human narrative element throughout Andor’s first season, but it also feels a bit strange that anti-Imperial sentiment feels almost entirely shouldered by humans at this point. You see the odd alien and the odd droid, but it almost feels like a conspicuous budget constraint to witness just how little the many exotic alien races and droids of the Star Wars universe ultimately factor in to Andor’s storytelling for now, a constraint that’s no doubt exacerbated by Andor’s seasons being almost twice as long as most other live-action Star Wars TV seasons.

Even amidst so much of its surprising violence and harsh grit however, Andor still ultimately doesn’t lose its sense of hope and inspiration in the end, something it trickles out just enough to prevent viewers from feeling overwhelmed or depressed. There’s just enough recognizable Star Wars conventions to keep Andor placed within the franchise, but this series nonetheless pushes Star Wars in a spectacularly refreshing new direction, downplaying the spectacle in favour of pulpy intrigue. The Mandalorian certainly got the ball rolling here, but it’s Andor that proves to be Star Wars’ true Disney+ masterpiece, one that makes the franchise feel fresher and more exciting than it has in decades!

Again, some people won’t be able to get into Andor, especially if they prefer their Star Wars content to be lighter, flashier and more fun. For those waiting for the live-action arm of the franchise to finally take itself to the next level of narrative ambition however, Andor surpasses even The Mandalorian in that mission! It doesn’t need cute Yoda-esque mascots or a series of legacy hero cameos to make that happen either. Finally, Disney’s Star Wars canon has fully grown up and taken some significant risks, hopefully inspiring a new wave of narratively rich expansions to the universe from here. Best of all? Andor itself is only at the halfway point of its storytelling, with a second and final season on the way in the near future, no doubt giving us even more impeccably seedy storytelling to look forward to!