Death is an inevitability of life, and we’re the only species lucky enough to know about it in advance. The problem is that Death is a tricky bastard, who doesn’t always announce his presence or his intentions, and likes to visit us all at different times, not to mention in different ways. Most of us grow up, lose our parents and are faced with the awful task of having to bury our dearest loved ones, but that isn’t the case for everyone. We all live different lives, and that’s the truth.

When a parent passes away, their surviving loved ones must deal with their wishes, including funereal arrangements and the will if there is one. Then it’s all about going through their things and deciding what to keep, and what to donate or throw away. It’s in this awful stage where we find the main character of Annapurna Interactive’s new game, Hindsight.

This is the artful story of a woman (in her thirties, or maybe even later in life), who must return to her childhood home to pack up her mother’s things after her unexpected passing. It’s clear that the daughter — who is mixed race, and grew up with a demanding workaholic of a mom — hasn’t been back often, and has gotten carried away with her job. That doesn’t mean she didn’t love her mother, though, nor does it make things easier.

Now, you may be thinking that this sounds like a boring game if all it’s about is packing things up. Well, while it does drag at times (I’ve got to be honest, and did get a tad bored sometimes), it’s an artful experience that is somewhat like a very light puzzle game. The key is to highlight and select the correct person or item in each frame to progress the story, which often involves rotating items to receive a glimpse into the past.

It’s honestly hard to describe how seamlessly all of the above works by using words. You have to really see it to fully grasp it. My description makes it sound like you have to search for a hidden item in each frame, but it’s not that difficult or involved. There’s just one flashing or colourful thing in each frame that you’ll press A on to activate, after seeing the cursor grow bigger. Generally speaking, there’s only one option and it’s easy to find, but the odd one can be tricky.

As you go through the rooms of her mother’s house, you’ll witness the life of this Japanese-American woman through her eyes, as she looks back and tries to understand things better. You’ll witness and interact with the moments and items that both stuck with her and shaped her, and this is why the game is called Hindsight. After all, “Hindsight is 20/20!”

There are themes of love, loss, misunderstandings, and not having the whole picture. This goes along with the saying that you don’t always see everything that goes on, and the one about how you don’t always understand things when you’re young. Those, plus grief, anger, disappointment and sadness.

As someone who lost his mother recently, Hindsight hit close to home. I could sympathize with this unnamed character, and found that the game gave me more understanding of my father’s role in my life. I appreciated all of this, even if I was occasionally bored and became a bit more depressed near the end of the brief (2-3 hour) story, due to its subject matter hitting close to home. It made me miss and want to talk to my mom, who was amazing and the best I could have ever wished for. 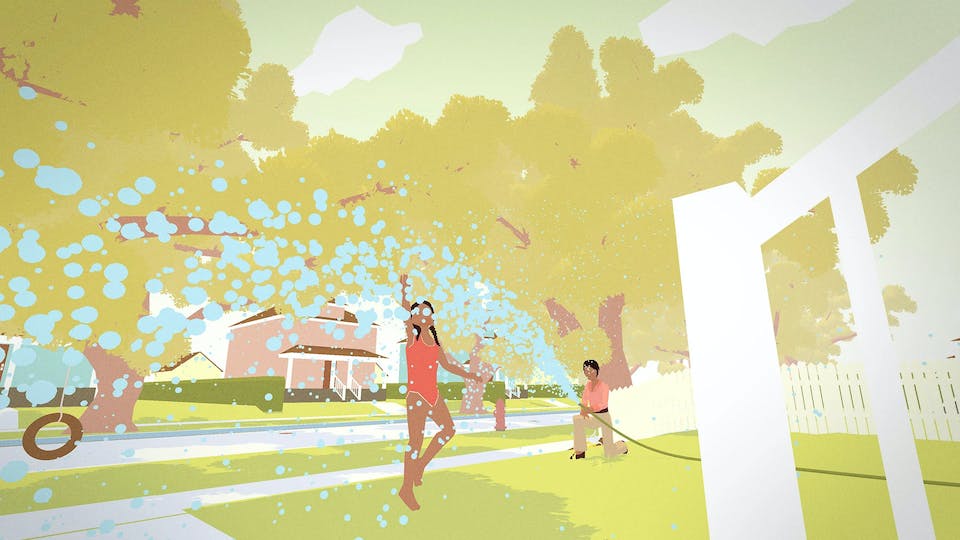 Due to the nature of this slow, heartfelt, emotional and light (in terms of gameplay, not subject matter) experience, all must not apply. Hindsight feels like a passion project made by someone who lost a parent and wanted to play tribute to them, and they’ve done a wonderful job doing that. However, as a game, it’s definitely not for everyone and will only appeal to a certain, more mature, audience. It drags a bit, as well, and has a couple of obtuse parts that slow it down further.

What I said above is true, though: Hindsight is a work of art, and further proof that video games are just that. It’s beautiful, melancholic and features a very effective but simple art style that really befits it. The details are minimal, the colours are strong and it’s like watching moving art or even a moving painting at times. The music and sound effects are also effective, as is the limited voice acting through narration. Thankfully, the writing is also strong.

If you are willing to dive into a sad, melancholy, grief driven, but beautiful, narrative game, check out Hindsight. It’s not going to be for many, but some will really appreciate it. After all, it’s an effective and memorable piece of interactive art.

This review is based on the Xbox Series S version of the game. We were provided with a review code.

Hindsight Review
Hindsight is interactive art, which tells a difficult story that many of us will be able to relate to at one point or another.
Visuals 80%
Audio80%
Gameplay75%
Storyline 85%
The Good Stuff
The Not-So-Good Stuff
2022-12-16
78%Overall Score
Reader Rating: (0 Votes)
0%