Agents of S.H.I.E.L.D. continued to build off of its awesome momentum from a couple of weeks ago, following its hiatus last week, by delivering another outstanding episode, this time shedding more light on T.A.H.I.T.I., including who else was part of the project beyond Coulson. An equally great B-plot involving Coulson’s team pursuing and attempting to re-capture an escaped Ward elevated things further, placing “The Writing on the Wall” as potentially the best episode of the season yet!

With May, Bobbi, Hunter and Triplett out trying to round up Ward, Skye, Fitz, Simmons and Mac were left to supervise a mystery regarding Coulson team’s being informed of a murder victim that had the same carvings as Coulson’s cut into her body. The plot thickens when the victim is revealed to be a former S.H.I.E.L.D. agent, leaving Coulson to go into the dream machine and delve into his repressed memories to try and figure out exactly who else may have been involved with Project T.A.H.I.T.I. 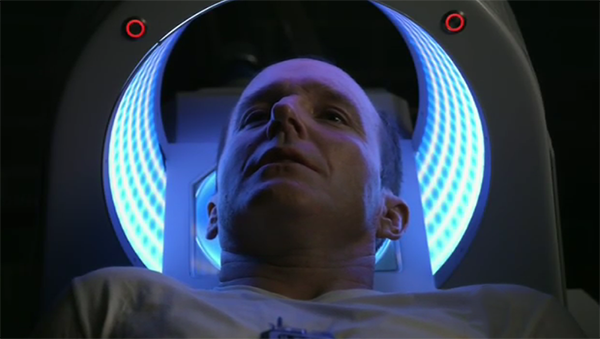 Sure enough, a number of former agents were also subjected to the treatment, initially happy and able to return to the field. Like Coulson though, many of them start carving, and a particularly troublesome individual, Sebastian Derek (who was revealed to be the guy getting the tattoos of the GH map embedded on him at the end of the previous episode), is apparently targeting and killing the other former S.H.I.E.L.D. operatives, who have all had their memories erased, and are now living seemingly normal lives. The motive led to the high-profile development that the carvings come from genetic memories said to be implanted from the alien host, and are compelling them to go somewhere, but where? Where does the map lead?

Naturally, this was a superb episode for Clark Gregg, who really got to delve into the most tortured, challenging parts of Coulson’s psychology during this episode. Right from the moment that Coulson signed off on his own torture to get to the truth, and subsequently threw Skye into Ward’s cell so that she couldn’t stop him from potentially killing the remaining GH patients, every moment with Coulson was a winner this episode. Likewise, Sebastian Derek proved to be an unsettling and effectively deranged villain-of-the-week for Agents of S.H.I.E.L.D., representing the dark side of Coulson’s obsession with trying to decode the strange carvings. 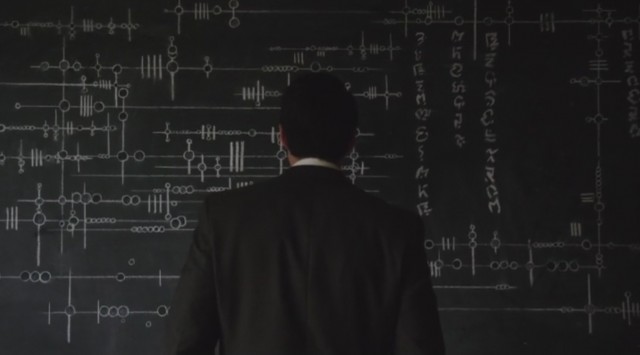 The tense stand-off between Coulson and Derek at the final victim’s house was pretty enjoyable to watch, particularly as said victim ended up recalling the ability to return a throwing knife from deep in his sub-conscious (a highlight moment in an episode full of highlight moments), and Coulson later stopped the bad guy without a single fatality, proving he’s still well in control of his condition. After Skye came on to the scene, it was cool to have her and Coulson deduce that the model the rescued former agent was building with his son happened to be a representation of the same carvings, and revealed them to be in three dimensions, rather than two. Thus, the carvings aren’t just a map, but a city!

A fan theory is already floating around that suggests that the city is Attilan, the city of the Inhumans. Given that Inhumans is already one of the movies on Marvel Studios’ upcoming Phase Three schedule, this is entirely possible, and it would also explain why Skye and her father appear perfectly human, but seem to have some sort of buried capabilities, and Skye’s father especially has been alluded to as a monster. This would also effectively tie into the GH Formula appearing to come from a Kree host, as the Inhumans were created by the Kree experimenting on sub-humans thousands of years ago, which would also fit with the age of the specimen. It’s just a theory, and it may not turn out to be the case, but it’s cool to think about Agents of S.H.I.E.L.D. being the vehicle to spearhead the setup for a big Marvel Studios movie to come!

In any case, the material with Ward also shone this week, as the intense cat-and-mouse game between Ward and his pursuers proved to be consistently engaging and unpredictable. Ward’s ambiguity only deepened as he revealed that he was wearing a semtex vest, and sported a dead man’s switch, continually threatening to blow himself up, and take up an entire bus’s worth of civilians with him. Is it a bluff? Who knows. Likewise, seeing Ward use other civilians to get around in a charming, yet undeniably sociopathic manner was also equal parts clever and scary. Ward is starting to appear all the more detached and mentally unsound, regardless of his intentions, and even if he truly believes he’s helping Skye at the very least, he’s not a man that should be left at large. 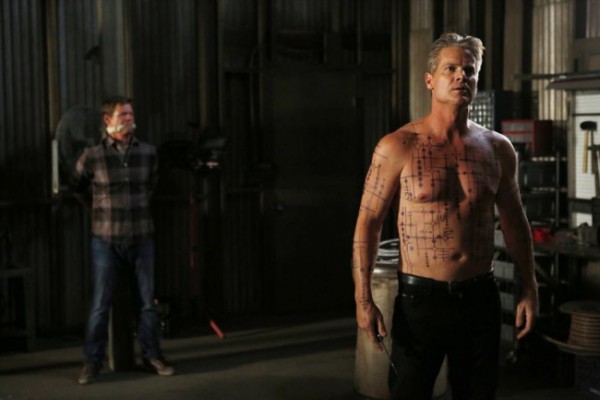 This is why it wasn’t so bad to have Ward get away when all was said and done. Tricking one of Whitehall’s HYDRA goons, Ward leaves him as a ‘gift’ for Coulson, yet again leaving his exact intentions unclear. Ward answers to no one now, and that could be the worst possible outcome for both S.H.I.E.L.D. and HYDRA. It’s just a matter of which one may end up on Ward’s bad side first.

Again, “The Writing on the Wall” was absolutely sublime, and in many respects, represents Agents of S.H.I.E.L.D. at its best. With the riddle of Coulson’s carvings now starting to come together, and Ward representing an unstoppable menace for both S.H.I.E.L.D. and HYDRA, the season is already presenting some great payoffs out of the stronger episodes to come before during Season Two.