Arrow’s been off its game for the past few weeks. Season Three seemed to hit an especially low slump last week with “Guilty”, a rather sloppy and unsatisfying episode that nonetheless ended with a promising tease of a better villain to come. Fortunately, that tease paid off, as “Draw Back Your Bow” was a huge improvement over the recent weaker episodes, bringing the show back to good form with a fun, innovative new nemesis for Team Arrow, and a welcome return to the inner turmoil that Oliver is struggling with as he embraces a cold, lonely existence.

In fact, it’s a bit baffling that The CW didn’t save this episode for a kind of Valentine’s Day special in February. Amy Gumenick re-appeared once again as one of Green Arrow’s most dangerous recurring foes in the DC printed panels, Carrie Cutter, a.k.a. Cupid, a murderous fan of the Emerald Archer that is willing to kill and destroy in her quest for Green Arrow’s heart. Gumenick’s Cupid was a sinister and cheeky menace, and probably one of the most entertaining villains that the show has had in quite a while. Sure, she was ultimately a pretty one-note baddie, but at least Cupid was very enjoyable to watch in her proper debut.

The DC Television Universe tweaks Cupid slightly so that she’s no longer the victim of emotionally-manipulating military experimentation, and instead simply suffers from acute Attachment Disorder, having latched on to a singular, obsessive focus on The Arrow, after he saved her life during Slade Wilson’s Mirakuru-powered army rampage. The callback to Season Two’s epic war on Starling City was a great touch here, as a seemingly routine rescue would come back to haunt Oliver and his team, with Carrie being revealed to have stalked the city’s hero in every subsequent crime scene, complete with the aid of a computer expert that she conveniently kills when he stops being of use. Go figure.

Cupid herself may have just been a cute, vaguely affectionate clown of a villainess, but her presence did provide another good excuse to touch on a new conflict that’s been brought up in Season Three; Oliver’s belief that he must accept a life of solitude and emptiness after taking up the mantle of The Arrow. Oliver is now feeling the effects of his emotional distance from everyone around him, and it was cool to see Cupid bringing out this struggle once again, particularly in how it reminded him of his ill-fated date with Felicity during this season’s premiere.

In fact, Felicity continued to shine in her dynamic with Ray Palmer, who has just re-branded Queen Consolidated as Palmer Technologies, further diminishing Oliver’s public legacy. His not-so-subtle advances on Felicity distracted her to the point where Oliver once again got more than a little jealous (he’s had that problem lately), and even had the misfortune of (somehow) finding his way up to his former building’s offices just in time to see Felicity and Palmer share a kiss at long last. Ouch.

Roy also appears to be taking an emotional beating, with his presence surprisingly minimized this week, after he learned of his murder of the police officer during Season Two at the end of last week’s episode. Adding insult to injury is the fact that Thea, in her desperate quest to find a competent DJ for the grand re-opening of Verdant, ends up hiring and eventually making out with a cocky, yet skilled DJ who didn’t even bother to audition. Roy has officially been replaced. Too bad the new guy is kind of a shallow tool, and it seems inevitable that he’s going to break Thea’s heart eventually, but, one episode at a time for these ill-advised romantic arcs I suppose. At least it should be funny if Thea ever decides to bring the jackass home to Daddy Merlyn.

The final result of everything is that new romances were made, and Oliver managed to subdue his crazed fan, who was taken away by A.R.G.U.S. to be the newest member of the Suicide Squad. Diggle’s crack about her apparently being nuttier than the last woman the Suicide Squad had (referencing that awesome Season Two cameo of Harley Quinn) was pretty funny, even if the fact remains that Cupid still got off pretty damn easy, especially considering how clearly sick she is. Fortunately, her recruitment into the Suicide Squad means that we’ll inevitably see her again at some point, working for A.R.G.U.S. or otherwise, which is great, as she’s a hoot to watch.

Even the Hong Kong flashbacks became a bit more exciting this episode, with Oliver finally getting more worthwhile screentime with Tatsu, rather than Maseo. After the two believe that Maseo may have been killed, we get our first glimpse of Tatsu brandishing a katana and taking out an entire Triad squad by herself. It’s a great scene that starts foreshadowing Tatsu becoming DC heroine, Katana, even if the payoff was a little weak, with Maseo simply not being able to call as usual due to an A.R.G.U.S. lockdown. It also felt like an annoying fake-out, since DC fans know that Maseo’s days are clearly numbered, if Katana’s story in the comics is any indication. 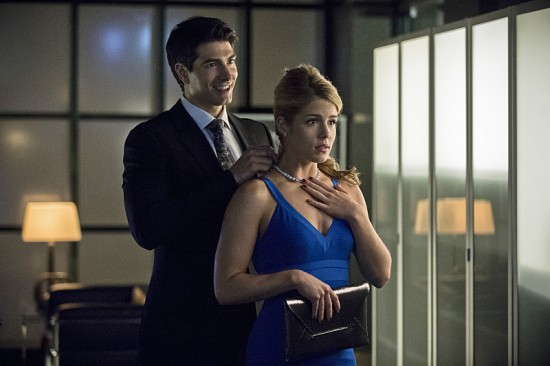 While still below the quality of the excellent Season Three premiere especially, “Draw Back Your Bow” was a much-needed step in the right direction, after Arrow’s stumbles recently. The story was better, the character arcs were more engaging, and the action was just as appealing all around. With the episode ending by introducing Captain Boomerang, segueing immediately into December’s highly anticipated pair of crossover episodes for Arrow and The Flash, along with the first teases of Ray Palmer realizing his destiny as DC hero, The Atom, here’s hoping that this positive momentum leads to some place even better when Oliver lends his bow to the Scarlet Speedster soon!

Arrow 3.7: "Draw Back Your Bow" Review
Arrow significantly returned to form with "Draw Back Your Bow", presenting a fun villain and lots of rewarding emotional developments between several of the leads.
THE GOOD STUFF
THE NOT-SO-GOOD STUFF
2014-11-20
85%Overall Score
Reader Rating: (2 Votes)
85%