After a season highlight with last week’s episode, “The Writing on the Wall”, Agents of S.H.I.E.L.D. delivered yet another season highlight this week, with another outstanding episode that continues to put the final pieces into place regarding where the mysterious alien carvings lead. Even more importantly, we finally got some insight into how Dr. Whitehall has cheated death and age, complete with yet another 1945 flashback that has Hayley Atwell reprising her role as Peggy Carter.

As Coulson’s crew begins to close in on the mysterious city, Coulson formulates a plan to probe the entire planet for the city’s location. Skye and Tripp go to Oahu to drop off some gizmos to a couple of military-types, which, when united, will cause an EMP that will allow them to hack a satellite relay situated in Oahu from Australia. It’s definitely a brilliant plan, and it was made all the better by Coulson continuing to embrace his role as S.H.I.E.L.D. Director, warning Skye and Tripp all about what they shouldn’t do with their dangerous equipment, yet never actually telling them what it is. It was pretty funny in a somewhat dark way. 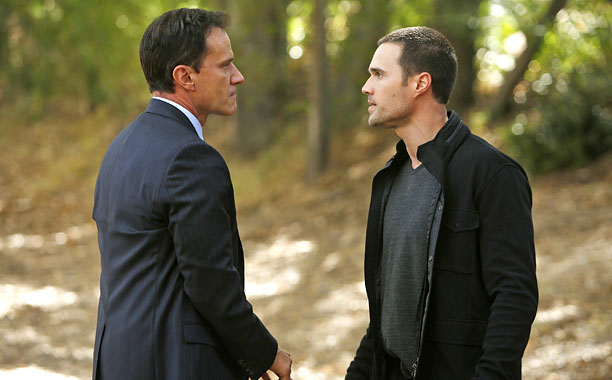 While this was going on, Ward caught up with his older brother, where he tormented him all the way to the old well that Christian apparently used to bully Ward into torturing his younger brother, Thomas in. This was probably one of the episode’s best interactions, and one that’s been built up for a while. The best part was that Ward was apparently telling the truth about his brother as well. Christian really did force Ward to bully Thomas and nearly kill him, though his reasons may not be what you think.

Apparently, Ward’s parents were especially abusive, with Christian alluding to them, “Torturing” Grant and Christian, but not Thomas. Since Christian hated Thomas for his preferential treatment, he wanted to kill him, but didn’t have the courage to do it himself. Thus, he bullied Ward into trying to do it. It actually makes sense, and helps to reconcile Christian’s character being an outwardly well-adjusted (albeit slimy) guy that doesn’t come off as a sadist. It also seems to validate Ward’s story at the same time, so this was a well-written result, as was the fake-out moment where Ward initially seemed like he was going to throw Christian in the well to drown, only to lovingly walk him away saying that all is forgiven…

… Except it really wasn’t, since Ward meets up with Whitehall at the end of the episode, eager to join HYDRA again. Not only that, but after the two discuss second chances, Whitehall shows a news report, where both Christian and Ward’s parents were found dead in a burning building, with Ward using Christian’s confession about bullying Thomas as false evidence to make it appear that Christian did it as a murder-suicide. Wow. This is one of the small instances where something happening off-screen actually worked really well, and continued to prove that Ward is a scary, increasingly deranged character who becomes more unpredictable with every episode.

Whitehall also got big developments this week, as mentioned. The secret behind his stalled aging was finally revealed, just as Simmons proclaims to Mac and May that Whitehall in fact apparently hasn’t aged since 1945, after recognizing that he looks exactly the same from an old military photograph. In reality, he did age as normal to start, since Peggy Carter threw him in prison for life after deciding that she didn’t want HYDRA’s help decoding the alien artifacts that she seized with the Howling Commandos during the flashback earlier in the season, though he later stole the age-reversing organs and tissue from a woman who also happened to be… Skye’s mother?!

Yes, we finally got to see Skye’s mother in the flesh this week, along with the reveal of how she died, and how Skye’s father plays into the whole alliance with Whitehall. Apparently, Skye’s father is not in fact Whitehall’s friend, but is instead out to, “Rip him apart” after what he did to his wife, and Skye’s mother. Keep your friends close and your enemies closer, as it were. It was yet another superb twist that also makes Skye’s father an effectively ambiguous character, as right beforehand, he encounters Coulson again, and almost allows Tripp to bleed out to avoid capture after Tripp is surprised by some enemy shots. Skye’s father does end up saving Tripp, making the promo teases of an agent’s life being in the balance ultimately ending up rather pointless, but it was still a cool moment. 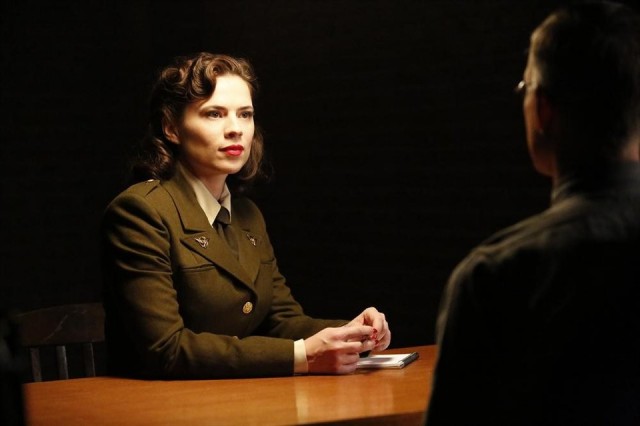 This episode also seemed to piece together yet more evidence that the mysterious city everyone is looking for is in fact, Attilan, home of The Inhumans. Both Skye’s father and Whitehall talk about the, “Blue angels” falling from the heavens, whom we already know are Kree, the familiar blue race of aliens glimpsed both in Season One, and during this past August’s Marvel Cinematic Universe movie sensation, Guardians of the Galaxy. The satellite network also seems to pinpoint a location as to where Attilan may be… Though since Attilan moves around in Marvel Comics canon, it’s likely that the race is still in its early stages. That said, there’s virtually no doubt that the city is Attilan after this episode, barring some other last-minute twist.

“The Things We Bury” thus proved to be a very, very busy episode, though one that was busy for all the right reasons. The developments around Coulson’s carvings and HYDRA continue to impress, as does the question as to who Ward actually is, and what his plans may be. The mystery around Skye and Raina, and the likelihood that they are also Inhumans, is also very exciting. This episode directly revealed that The Obelisk is not a weapon, but a key, and its real name, The Diviner, comes from it ‘choosing’ humans to survive as the Kree’s subjects while they obliterate the rest of humanity. Again, it’s yet more definitive proof that the show seems to be setting up The Inhumans.

All in all, this was another excellent episode that has turned Agents of S.H.I.E.L.D. into one of this Fall’s top returning shows overall, despite its mixed reception from Season One. It’s mind-blowing how much the show has improved in several key areas during Season Two, which has unanimously delivered episodes ranging from great to fantastic. “The Things we Bury” is among the most fantastic yet, right alongside “The Writing on the Wall”, and if momentum keeps, the race to the mysterious city and the secrets of the Kree is only going to keep getting better!