Another Tuesday in Central City, another metahuman comes calling. This week, Barry dealt with another C-list DC villain, albeit one that finally made his abilities appear borderline useless. Most of the episode felt like it settled into a familiar groove, but considering that The Flash has so far proven to be an outstanding new show, a more by-the-book episode is still far better than most television offerings.

The villain-of-the-week in this case was Tony Woodward, a.k.a. Girder, a metahuman with the ability to turn his body to steel. Barry’s speed and fighting ability doesn’t help him against the seemingly impervious Girder, who also happens to be Barry’s childhood bully. Go figure. On this note, Wells’ crack about Girder being a, “Man of Steel” will be positively eye-rolling for DC fans, but so far, the DC Television Universe doesn’t seem to have a Superman to take offense to such an association. 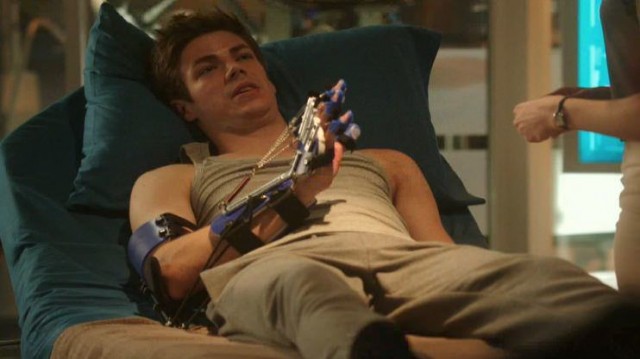 On the bright side, Barry continues his development nicely, with Cisco theorizing that Girder may be able to be taken down with a supersonic punch that Barry charges up from miles away. This also came with no small shortage of teasing Cisco’s affinity for sonic things, foreshadowing his future as sonic-powered DC hero, Vibe. Anyhow, the execution of the sonic punch, and how it applies to the latest flashback teachings from Detective West, is well-done and cool to watch. Even more cool is that Barry doesn’t even deal the finishing blow to Girder before throwing him in the pipeline under S.T.A.R. Labs, with Girder’s powers being compromised being followed by Iris clocking the dude and knocking him out with one punch, after she was initially kidnapped by her former elementary school admirer. Damn. Looks like Iris packs a mean punch too, even without powers! 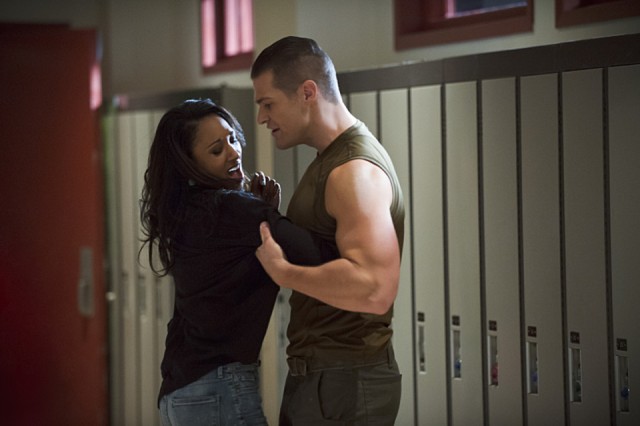 Aside from the business with Girder, which was pretty standard, cool sonic boom punch aside, Detective West anchored a B-plot that had him continuing to vigorously investigate the murder of Barry’s mother. The trail appears to lead to Harrison Wells, whom West questions rather bluntly over drinks. Detective West eventually learns that Wells came to Central City to start over after the mysterious death of his wife, and tries to apologize and make amends, as Wells appears to have a tragic alibi… But that didn’t necessarily make Wells less suspicious for the audience.

The final sequence of the episode had Detective West looking over the evidence again at his home, before being surrounded by the same wave of lightning that enveloped Barry’s mother so many years ago. We see the same glimpse of the Flash-like man in yellow (who is most certainly a Reverse-Flash, as DC fans can easily ascertain), and the next thing West knows, all of the evidence has vanished from his table. All he sees is a knife in the wall through a photograph of Iris, with the ominous message, “Stop, or else” written above. Yikes!

This would seem to suggest that West was on the right track with his suspicion of Wells, making Wells seem all the more likely to be a Reverse-Flash, or somehow in league with ultimate Reverse-Flash and Flash arch-nemesis, Professor Zoom. Could it be that Wells is this show’s version of The Rival, the original Reverse-Flash, who was also a scientist trying to perfect the Flash formula?

The only other possible candidate who may have known that West was getting closer in his investigation is Eddie, his partner, with Eddie (or Eobard) also being suspect-worthy as the apparent civilian alter-ego of Professor Zoom in DC Comics canon. There’s less evidence to suggest that Eddie may be Barry’s mystery killer, especially since he would probably have to be a time-traveler in that case, given his age. Still, it’s another possibility worth thinking about, even if Wells appears to be more the guilty party at this point.

In any case, it seemed like Detective West had the better plot this week. There was nothing fundamentally wrong with Barry’s main plot, but there wasn’t anything especially interesting about it either. It was reliable fun, but ultimately not very memorable. The only standout moment was when Iris officially re-christens her hero as, ‘The Flash’, watching her blog followers skyrocket as she pitches the new name. It’s an uplifting moment that fans of The Flash are sure to love.

“The Flash is Born” was good, even if the official novelty of Barry’s bag of tricks is starting to wear off a bit now. Again though, this still remains arguably the best new show of the Fall in most respects, so even in a more by-the-book episode, it’s high-quality entertainment.

The Flash 1.6: "The Flash is Born" Review
"The Flash is Born" settled into a familiar groove as far as The Flash goes, but it was still a fun and enjoyable episode with some good developments for the West family.
THE GOOD STUFF
THE NOT-SO-GOOD STUFF
2014-11-19
83%Overall Score
Reader Rating: (1 Vote)
83%