Another of the most major Batman antagonists to come was introduced this week on Gotham, in an episode aptly titled, “Harvey Dent.” The man who would one day become schizophrenic crime lord, Two-Face made his debut in this episode, even if the episode did make for a disappointing start for him, since we barely see Dent, considering that the episode is named after him.

In fact, overall, “Harvey Dent” was a bit of a downgrade from the past few weeks of fantastic episodes. It felt like the premise was good, but the execution was a tad problematic. The latest villain plot was a bore, considering the past few villains we’ve gotten, and even the mob material wasn’t anything of note this week, especially given that Penguin has just arbitrarily started snooping around Liza for reasons unknown.

First, the main question is Nicholas D’Agosto, guest-starring as Gotham City’s current Assistant District Attorney, Harvey Dent, and yes, D’Agosto is great in the part. We see an incredible candor and passion for the city with the character, along with a standout moment where Dent briefly loses his temper with a suspect he’s questioning, which helps to illustrate the kind of menace he’ll one day achieve as Two-Face. Again, it’s disappointing that Dent was barely featured in the end, but it’s likely that D’Agosto will be back in a future episode, even if it looks like we may have to wait for a hopeful (but very likely at this point) second season for Gotham.

With Dent pretty well entirely in the background, Gordon and Bullock were left to chase a bomber that was broken out of a transfer from the city’s infamous Blackgate Prison (making its first visible debut on the show this episode), who was abducted by mobsters. The bomber plot itself was pretty bland, but the twist that the bomber wasn’t evil and was actively trying to get psychiatric help for himself after his crimes (which didn’t claim lives), was well done. It also inevitably led to the increasingly corrupt Mayor James signing off on the transfer of psychiatric patients from Blackgate to the newly re-opened Arkham Asylum, which would likely be received well by the general public, even if Batman fans know that this is anything but good news. 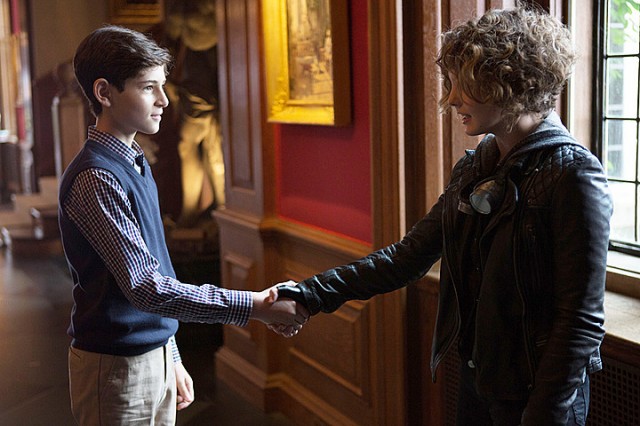 The other major plot this week came from Gordon having to find temporary custody for Selina Kyle, just in time for him to get Barbara’s letter announcing that she’s leaving. So, Gordon’s just allowed to chill at her place anyway now? Whatever. Selina didn’t end up staying at Gordon’s (well, Barbara’s) apartment as it happens, and was shipped off to Wayne Manor, where she’s staying under Bruce and Alfred’s protective custody. Bruce insists on Selina sticking around due to the evidence she could provide about his parents’ murder, even if Alfred is initially against the idea, though later relents when he sees how happy Selina makes Bruce, who is in desperate need of some good friends.

The interaction between Bruce and Selina is alright, even if the dialogue is a tad awkward, but hey, they’re about 13-15 years old at this point, so that’s probably just young teenagers. The cute ploy of Selina offering to let Bruce kiss her more than once felt a bit forced, but it wasn’t without its charm, even if it did seem like it was only there to address the turbulent romance between Batman and Catwoman in the future. One has to wonder why Bruce does things like submerge himself in the pool with all of his clothes on (network restriction, maybe?), but the promising prospect of Bruce learning some of his early stealth and street smarts from Selina, just as he learns some of his early fighting skills from Alfred, is an exciting one. 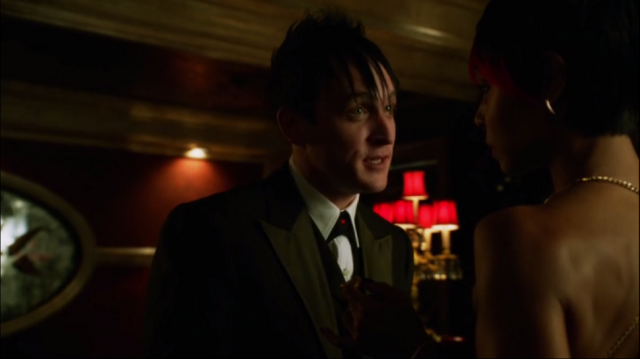 For the first time however, the Penguin material fell a tad flatter. It’s unknown as to why Penguin is suddenly harassing Liza, and being especially sketchy around Fish, whom he pays a visit to essentially just to taunt, but in any case, Penguin seems confident about his own agenda. The fact that he went to the trouble of scaring Liza, just to tell her to keep working Falcone as normal, was a bit odd, but perhaps it’s a setup for a later payoff.

Oh, and the episode ends with Barbara running back to bed with Montoya for some cheap titillation. After Montoya’s olive branch to Gordon a few episodes back, this seems like a blatant stab-in-the-back by both characters, but I suppose Barbara did say she wanted to figure things out. Barbara is still in desperate need of a consistent character arc, and it’s doubtful that the relationship with Montoya will be anything more than a mistake in the long-term, but hey, at least FOX showed two beautiful women kissing. The teen boys watching should be thrilled.

“Harvey Dent” has a shakier script and a slightly sloppier plotline, even if the foundation of the episode itself was sound. Some of these awkward events may lead to better payoffs later in the season, though it’s difficult to shake the disappointment that the episode’s title character barely had five minutes of screentime. This episode felt like the show needing to take a breath after a series of big developments, and that’s fair enough. Hopefully it doesn’t take much longer to catch its breath though.

Gotham 1.9: "Harvey Dent" Review
"Harvey Dent" showcased disappointingly little of its title character, even if it did feature an interesting hook of Selina living at Wayne Manor, and a villain who was more than just a criminal.
THE GOOD STUFF
THE NOT-SO-GOOD STUFF
2014-11-18
75%Overall Score
Reader Rating: (1 Vote)
74%