The Walking Dead lept perspectives yet again this week, going back to the events shared between Daryl and Carol after they begin tracking the car with the white cross that abducted Beth. It was a slow-paced, ominous episode that was all about simplicity, and even managed to link nicely with the events of “Slabtown” from a couple of weeks ago. “Consumed” may not be a very complicated or terribly memorable episode, but it’s at least well-constructed, and fills in the quest of Daryl and Carol during their search for Beth.

If there’s one big plus to “Consumed”, it’s the atmosphere. This episode is packed to the brim with outstanding atmosphere, from the sweeping cityscape of post-apocalyptic Atlanta, to the many images of atrocity and emptiness that greet Daryl and Carol at almost every step of the way. There wasn’t much dialogue this episode, but the dialogue that was chosen was adeptly-written, and this made for an especially enjoyable experience if you’re especially attached to Daryl and/or Carol, as many fans of AMC’s The Walking Dead are. 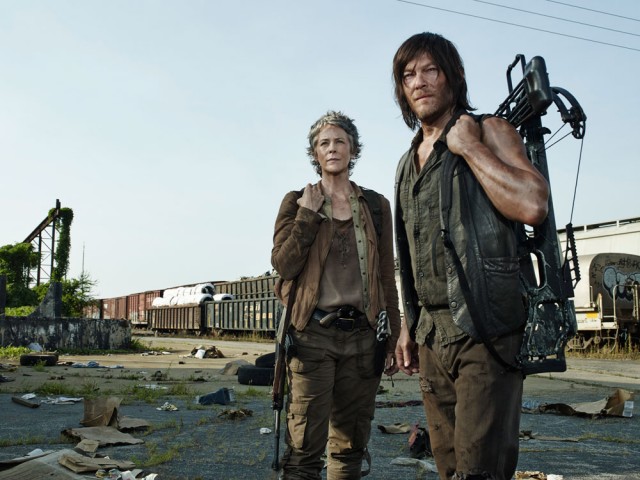 The action was similarly good this episode, as Daryl and Carol used predictably brilliant tactics and ruthless efficiency when dealing with Walkers. There was a particularly cool moment where the two had to flip a van off of a bridge to reach safety, somehow escaping with zero injuries. As cool as it was, the moment was slightly tarnished by a hilariously obvious continuity error though, where the van was dropping upside-down as normal, but was then magically upright in the very next shot, despite the drop not having nearly enough time or force to flip it back around, much less for a perfect landing. Come on, AMC! You didn’t even try to hide that one!

The fact that such a silly filming error stuck out so much was a real testament to how otherwise brilliantly-realized this episode was though. It was especially cool when Noah came into play, after Beth freed him towards the conclusion of “Slabtown”, and ran afoul of both Daryl and Carol, even going as far as to rob them of their weapons at one point. It was a bit sloppy to have the two flip-flop about whether or not to kill Noah, with Carol wanting him dead against Daryl’s wishes to start, only to have Daryl decide to leave him as Walker bait while Carol protested the second time, but the situation sort of equalized itself when Daryl relented and ultimately saved the guy from a grisly death after pinning him under a bookshelf.

This would appear to suggest that Noah is actually the one with Daryl when he re-appears after the events of “Four Walls and a Roof”, since Carol is hit by the van of Beth’s takers and taken away to the hospital, with Noah ultimately persuading Daryl not to cause trouble with them, as it would endanger Carol. The jury’s still out as to whether anything romantic is going on between Daryl and Carol, but regardless, it was nice to see Daryl’s care for Carol actually work against him in an interesting way.

When it comes down to it though, “Consumed” was mostly about scavenging, hunting and simply going through the motions of how Daryl and Carol now thrive in the zombie apocalypse. There isn’t much to read into, especially when we already know that there won’t be much in the way of dramatic twists or turns. One of the problems with “Slabtown” already ending with Carol being wheeled in to the hospital that Beth is currently confined to is that we already know it’s going to happen. We already know that she and Daryl will be separated. We already know that nothing much is going to happen as the two are pursuing Beth. It somewhat hurts an otherwise moody and meaningful episode plot, but at least the writers didn’t try to work against the necessary evil that they’d set up for themselves by making this episode needlessly complex. 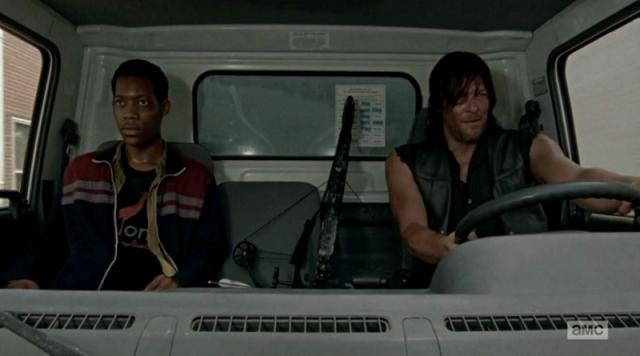 Thus, “Consumed” was a good episode overall. Heavy on atmosphere and entirely devoting the runtime to two of the show’s best characters (I still miss Rick, as do many others, but whatever), it filled in a missing part of the plot, and continued to piece together the (mostly solved) mystery behind Beth’s captors. I still feel that Season Five’s storytelling is too messy and directionless at this point, but at least the quality of said storytelling is starting to improve.

The Walking Dead 5.6: "Consumed" Review
"Consumed" was a mostly uneventful episode that gave the spotlight to Daryl and Carol, filling in the events following Beth's disappearance, and delivering a standout offering of mood and atmosphere.
THE GOOD STUFF
THE NOT-SO-GOOD STUFF
2014-11-17
80%Overall Score
Reader Rating: (0 Votes)
0%