NOTE: Full spoilers for this episode of The Walking Dead, including a major character death, are present in this review.

The Walking Dead had its current story arcs come to a head this week with “Coda”, the show’s midseason/Fall finale. Unfortunately, it was also Season Five’s sloppiest episode since “Four Walls and a Roof”, even if it did come with a shocking, tragic conclusion, albeit one that some fans no doubt saw coming. Overall though, “Coda” was ultimately disappointing, especially for the show’s final episode of 2014, and the last one we’ll get before February.

The issues started right away as the fleeing cop ended up being chased by Rick in a cop car during the episode’s opening… With his hands bound. Even then, the guy saw fit to run, when he clearly couldn’t get away, and this led to Rick breaking his back with the car, and shooting him dead. Yes, it was a cool moment, and another reliable helping of badassery on Rick’s part, but it was the first of several rather forced dramatic contrivances throughout the episode. The death also had absolutely zero consequences in the end, since the other cops being held by Rick’s crew ultimately shrugged, despite the dead cop apparently being, “One of the good ones”, and immediately agreed to claim that the cop was eaten by Walkers. 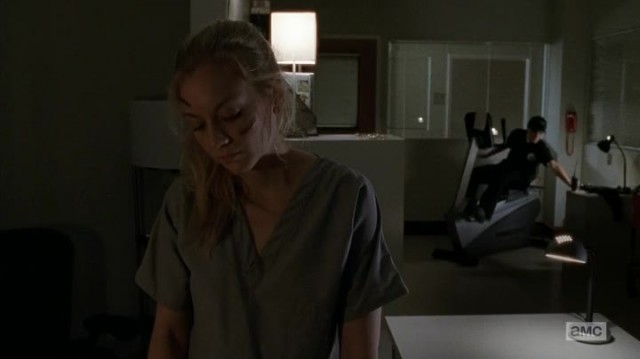 Similarly disappointing was Tyreese confessing to Sasha that he didn’t kill Martin back at Terminus. Sasha’s reaction? None to speak of. The episode just raised this potential issue, and immediately swept it under the rug. Why bother then?

In fact, “Coda” in general felt oddly paced. There were lots of drawn-out dialogue scenes throughout most of the episode, particularly at Grady Memorial between Dawn and Beth, forcing the final moments to pan out over the last few minutes, and making most of those dialogue scenes not achieve anything. Again, there was at least one cool moment between these two, when another, “Bad cop” attacks Dawn, and Beth pushes the guy down an elevator shaft, but what did it amount to in the end?

Nothing. During the final exchange, whereupon Rick’s group decided to exchange their captive officers for Carol and Beth, with Carol waking up off-screen (a big missed opportunity that glossed over her initial search for Beth with Daryl), Beth confronts Dawn one last time… And stabs her with a pair of scissors, leading to her immediately getting shot in the head and killed. Daryl finishes off Dawn with another shot to the head, and the other cops decide to just let Rick’s group go away with Noah, after Dawn apparently showed her true colours by demanding Noah, changing the simple exchange with Rick’s group right after the deal was done.

So Beth is gone. This rendered the entire search for Beth completely pointless (beyond Noah taking her place in the group), and Beth and Dawn simply both getting killed off made all of their shared dialogue throughout this episode especially, completely pointless. Beth’s sacrifice was also pointless, since, for all she knew, she would have started a huge gunfight that ended with everybody dead. Was it worth that risk? Why was purging Dawn’s presence from Grady Memorial necessary? On that note, why was the Grady Memorial story necessary, when Beth and Dawn’s arcs cancelled each other out, and nothing of value was gained or lost… Besides Noah? We don’t even learn who the good or bad folks at Grady Memorial definitively are, especially after none of them opt to join Rick’s group when he offers…. Besides Noah.

Even with Maggie’s anguish left to close out the episode, and a nicely emotional reaction from Daryl when he stands down after Beth’s killing, the whole Grady Memorial arc rounded off with a big fat goose egg. So much of it just felt like a waste of time, especially since Beth was ultimately not reclaimed. It’s further evidence that the showrunners just seem confused about what to do in Season Five, and keep repeatedly changing their minds about the direction of the season, whenever they’re not crowbarring in forced story developments. The show could have made room for a better, more fulfilling story arc if Rick’s crew had just found Beth dead somewhere else. Yes, the death wouldn’t have had the same impact, but the way that the show carried out Beth’s death seemed like simply a very roundabout way to exchange Beth for Noah. Why?

Oh, and the B-plot at the church was no better. Gabriel’s whole reason for leaving was simply so he could see with his own eyes whether Terminus was bad. Are you kidding me?! Worse yet, Gabriel shuffles back to the church, leading an entire horde of Walkers to the doorstep of Carl and Michonne, who have a baby… And they save him, thus sacrificing the church, their only steady shelter for now. Why?! That makes no sense! Why is the show keeping this guy alive?! Just so he can cause trouble?!

Ultimately, it led to the loss of the church, nobody dying, and that nail in Gabriel’s foot being, yet again, pointless. Oh, and who should speed to the rescue in the big fire truck right when it’s narratively convenient? Abraham’s crew, with Maggie and Glenn returned to the fold, making their departure and apparent despair at having no means to survive, pointless. Abraham tells Michonne about Eugene’s lie, and she barely reacts. Pointless. Again, what was the point of the D.C. arc when all of this is going nowhere?!

I’m aware of the fact that The Walking Dead is not supposed to have an end in sight for the zombie apocalypse. I’m aware that that’s not the idea. That said, the show still needs season arcs that it needs to stick to, even if they’re bound to be temporary destinations. It still needs character arcs that deliver meaning and progression, like the arcs with Rick, Daryl and Carol in particular throughout the series. It needs to have focus, and it needs to explore conflicts it brings up, without sweeping them under the rug. It needs to make its death and drama mean something beyond being purely disposable shock value. The dismal tone and need to create cheap drama and shock value is no excuse to have the show keep stumbling around in the same circle. That is frustrating, and that is, what’s our word of the day? Pointless! 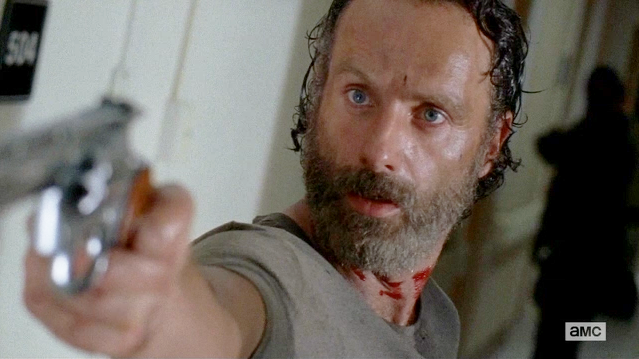 Thus, “Coda” made for a frustrating way to conclude the show’s character and story arcs up to this point in Season Five. Beyond the good start, this has been a season that is far too sloppy, scattered and directionless in 2014. “Coda” brought all of that messy storytelling to an equally messy head, and while Beth’s death was an emotional moment, it felt too forced and contrived, like so many other things this season. A handful of cool moments can’t salvage a midseason finale, or a first season half, that just didn’t end up going anywhere.

Hopefully 2015’s latter eight episodes for Season Five can go back to the more focused, fulfilling direction from the season’s first two episodes.

The Walking Dead 5.8: "Coda" Review
The Walking Dead concluded the first half of Season Five on a sour note, with all of the season's story arcs so far having gone nowhere, and the Grady Memorial arc having an especially disappointing, contrived conclusion.
THE GOOD STUFF
THE NOT-SO-GOOD STUFF
2014-12-01
61%Overall Score
Reader Rating: (0 Votes)
0%