After a couple of decent, but not great episodes, Brooklyn Nine-Nine rebounded a bit with “The Road Trip” this week, a funny and interesting episode that gave mostly good material to all of the major players on the show.

The main plot of the episode involved Peralta and Santiago taking a road trip to apprehend a perp from a romantic getaway hotel. Peralta decides to invite Sophia along, with Eva Longoria returning to her great guest role from “Jake and Sophia”, one of this season’s strongest episodes thus far. Peralta also makes the ill-advised decision of inviting Santiago’s boyfriend, Teddy, only to soon after find out that she is planning on breaking up with him. Awkward. 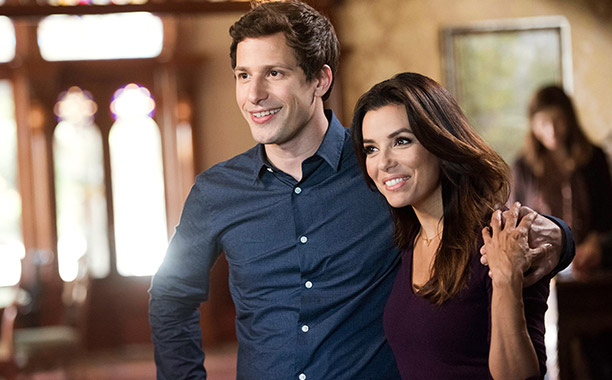 Eva Longoria and Andy Samberg largely stole the main plot, despite the big (and inevitable) development with Santiago kicking Teddy to the curb. Melissa Fumero was still given some good bits this week, namely in how she announced having to prepare a two-hour speech so that she could be coherent when breaking up with Teddy. The rest however felt a little weak and forced, since it just seemed like the show was picking this moment to arbitrarily remove Teddy from the equation.

Likewise, the equally inevitable indication that Santiago shared Peralta’s since-buried romantic affections also hit with a surprising whimper. The show thankfully avoided the low-hanging fruit of having Jake and Sophia fight over that, even if Sophia does initially storm off at Santiago being busted, but it’s a warning sign that the Peralta/Santiago drama may be back soon. That’s frustrating, since Peralta is clearly a great match with Sophia, and they’re an adorable couple, even when they end up sleeping in a hotel suite full of a thousand creepy dolls. Don’t ask. 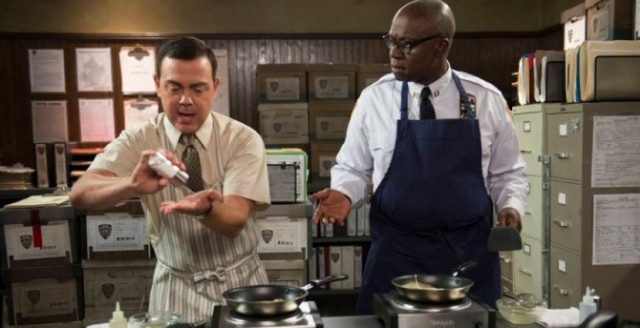 At the very least, the episode’s final moments with Peralta and Santiago driving back to the precinct were funny. Peralta inevitably takes the opportunity to poke fun at Santiago for liking him back, with Santiago making good on her threat to try and crash the car right as the episode ends. It helped to round off what is otherwise a slightly tedious bit in the episode.

Beyond that, “The Road Trip” featured two subplots, both of which were funny and well-executed. Boyle gets a rare chance to bond with Holt over food, and Diaz is in denial about having a cold while trying to proceed with a Giggle Pig interrogation, likely a holdover from the big bust at the end of last week’s episode.

Boyle’s plot with Holt felt a bit narratively suspect, since Holt was a bit out-of-character, but at least the humour didn’t suffer for it. There was a pretty dubious retcon here, since Holt suddenly has no interest in food, despite Season One establishing that Holt is one of the regular readers of Boyle’s food blog, but whatever. At the very least, we got a rare chance to see Boyle attempting to bond with Holt. The show even nicely referenced the fact that Holt never seems to notice Boyle, with Boyle actively declaring that he’s excited to finally be getting some private time to bond with his captain.

Holt was suddenly sloppy, impatient and careless, which, again, felt pretty out-of-character. At least everything ended nicely when Holt presents Boyle with a thank-you meal, which Boyle declares is perfect, now viewing Holt as a natural master chef. This probably isn’t the end for Boyle and Holt, and here’s hoping that some great comedic developments are mined from Boyle discovering Holt’s panache for cooking. 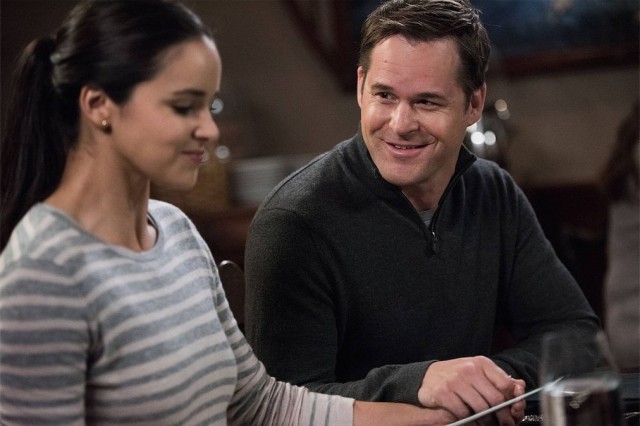 The strongest of the lot this episode was definitely the Diaz plot though. Jeffords and Gina try to deal with Diaz going to increasingly ludicrous lengths to deny her cold symptoms, including hopping herself up on the non-drowsy cold medication. Seeing Stephanie Beatriz suddenly go off the rails when she’s normally so deep into Diaz’s deadpan humour is as jarring as it is hilarious, with her funniest moment being when she learns Hitchcock’s first name, and predictably calls it a terrible name, before suddenly declaring that Hitchcock is the best detective she knows. Ohhh, boy. Diaz is not going to respond well to that when she comes to.

Things ended with Gina locking Diaz in a closet, where she fell asleep for ten hours, leaving Jeffords to sort out her interrogation. Gina even got to learn that Diaz talks in her sleep, and apparently has a strong sub-conscious desire to rip off her grandmother’s head. Yes, it was simple manic silliness, but the Diaz plot was consistently funny, and presented a unique and interesting new side to her character.

“The Road Trip” was a solid offering for Brooklyn Nine-Nine overall, having some reliable laughs, even if it came at the expense of some character arcs. At least it avoided the urge to terminate Peralta’s and Sophia’s relationship prematurely though, and that’s definitely a plus.