The HD remake of the original Resident Evil that was announced this year is apparently wrapping development very soon. Capcom has released some new gameplay footage showing the remake in action, confirming that the game will launch very soon, on January 20th, 2015.

Since then, Resident Evil has been remade twice before, exclusively for Nintendo. The first Resident Evil remake came in 2002 with the highly well-received GameCube-exclusive remake of the same name (which was ported to Wii a few years back), and the second in 2006 as Resident Evil: Deadly Silence, where it was made portable on the Nintendo DS.

Resident Evil sees the law enforcement agents of S.T.A.R.S. (Special Tactics and Rescue Squad) dispatched to and later trapped within Spencer Mansion, a sinister place that has become infested with zombies and mutants, after some unknown viral outbreak. The game offers dual perspectives, with separate storylines depending on whether the player wants to control Chris Redfield, or Jill Valentine. The 2015 HD remake will maintain this mechanic, though it will refine and smooth out the adventure, beyond just visually updating it. 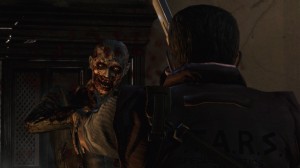 Resident Evil will release in its latest HD form, for PC, Xbox 360, PlayStation 3, PlayStation 4, and Xbox One. Just less than a month later, Capcom will also be releasing the latest entry in the series, episodic sequel, Resident Evil: Revelations 2, which will come to the same platforms, starting on February 17th-18th next year.

Keep shambling to Eggplante for all news and updates on the Resident Evil series.