UPDATE (12/25): Comedy fans got a bit of a Christmas surprise today, as Sony has released The Interview in its entirety on VOD, Xbox Live (though strangely, not Sony’s own PlayStation Network), and even as a paid video on YouTube. On top of that, certain independent theatres will exhibit the movie in a handful of spots in the U.S., though us Canadians are probably limited to watching it on VOD. 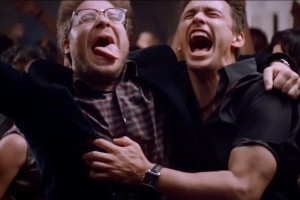 In light of the recent terror threats, made by the same hackers who have leaked loads of unreleased movies and top secret corporate information out of Sony, to movie theatres in the U.S. screening the movie, various theatre chains (including Canada’s own Cineplex chain) have refused to screen The Interview. As a result of the pressure, along with the 10% and falling stock drop that came with it, Sony Pictures decided to cancel the movie’s theatrical release previously set for December 25th, and was said to be mulling over DVD and VOD releases. Apparently, that’s not even happening however, after investigators reportedly (according to CNN anyway) found links to the hack originating from North Korea. This has apparently led to Sony axing the movie altogether, and never making it available to the public at any point.

It’s kind of a shame, as some early pre-screen reviews for The Interview were reasonably positive, and believed that since the movie was a silly farce, it wasn’t meriting of the controversy surrounding it. The movie was set to star Seth Rogen and James Franco as two bumbling interviewers who are commissioned by the CIA to assassinate North Korean leader, Kim Jong-un during an interview.

Despite the movie’s cancellation, theatres apparently have yet to remove trailers for it, as reports indicate that some movie screenings are still playing the red band and green band trailers for The Interview as of today, despite the movie not being released anymore. They should disappear soon.

It’s also reported that North Korean-set thriller, Pyongyang, which was set to star Steve Carell in a more serious role, will now also be indefinitely shelved, despite production getting ready to move ahead. 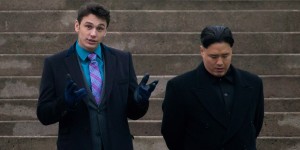 Sensitive E-mails that have gone public have caused a stir beyond the hackings of Sony Pictures itself. These have included scathing comments from the studio’s subsidiaries about certain movie stars, publicly irking their subjects, and even in-house talks about possibly returning the film rights of Marvel character, Spider-Man to Marvel Studios, striking a joint business venture that would allow the Web-Slinger to exist in the ultra-successful Marvel Cinematic Universe, albeit with the role recast, and no longer played by Andrew Garfield.

Don’t fret though! There are plenty of other movies to enjoy this Holiday season, including upcoming projects like Annie, Into the Woods, Night at the Museum: Secret of the Tomb and Unbroken, as well as movies we’ve already reviewed or will soon review, including Big Hero 6, Dumb and Dumber To, The Hunger Games: Mockingjay – Part 1, Horrible Bosses 2, The Penguins of Madagascar, and The Hobbit: The Battle of the Five Armies.

It’s all quite a mess, but here at Eggplante, we will continue to provide news and updates about high-profile Sony Pictures movies, as they become available.