UPDATE: Netflix has modified their former stance on A.K.A. Jessica Jones, saying that it may not launch in 2015 after all. They have claimed that Daredevil, A.K.A. Jessica Jones, Luke Cage, Iron Fist and The Defenders are all planned to premiere roughly a year apart, being anywhere from eight to fifteen months. With Daredevil premiering in April, this means that A.K.A. Jessica Jones could premiere either towards the end of 2015, or in early 2016. Netflix does not want to commit to a strict schedule, and would rather find a time to air each Marvel Studios show when it’s ready. Production has not yet started on A.K.A. Jessica Jones either, beyond Krysten Ritter taking the title role, and Mike Colter signing as Luke Cage. Either way however, we can still look forward to Daredevil this year for sure.

Speaking at the TCA (Television Critics’ Association) today, Netflix revealed when we can expect several of their new dedicated shows to debut in 2015. Chief among these is Marvel’s much-hyped Daredevil series, which will actually be debuting earlier than rumour suggested.

Daredevil will go live for all territories that support Netflix on April 10th of this year. This is a whole month earlier than the speculated May premiere date. The Marvel Cinematic Universe-set series will be grittier and more violent (though still within the realms of PG-13), and will star Charlie Cox as the titular superhero, a blind acrobat and expert fighter whose remaining four senses are extraordinary. The series will involve Daredevil, by day being attorney, Matt Murdock, keeping the New York neighbourhood of Hell’s Kitchen safe from the criminals that escape the justice system. Daredevil also stars Rosario Dawson, Vincent D’Onofrio, Deborah Ann Woll, and Elden Henson. Its debut season will comprise thirteen episodes.

Netflix also revealed a new motion poster for Daredevil, which you can check out (in its static form) below: 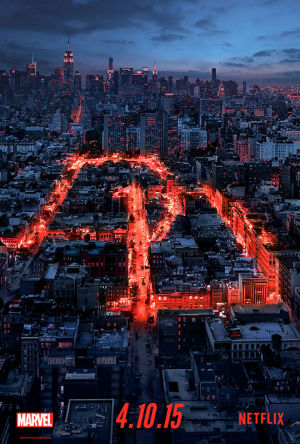 While Netflix was mum on whether Luke Cage or Iron Fist will debut on the streaming service this year, the next Marvel series in the lead-in to Marvel’s crossover miniseries, The Defenders, that being A.K.A. Jessica Jones, is still planned to premiere on Netflix in 2015.

Lastly, Netflix confirmed that Grace and Frankie, a dramedy series about two elderly women who have to start over with each other after their husbands leave them for the opposite woman, premieres on May 8th. Now in their 70’s in a 21st Century world, Grace and Frankie must learn to cope with the uprooting of their lives, being the ultimate golden age frenemies. Once again, the series’ debut season will comprise thirteen episodes. It will star Lily Tomlin and Jane Fonda in the title roles, with the supporting cast comprising Martin Sheen, Sam Waterston, Brooklyn Decker, Ethan Embry, June Diane Raphael, and Baron Vaughn.

Regarding their returning shows, House of Cards, BoJack Horseman and Orange is the New Black were all re-confirmed for a new season on Netflix in 2015. The recently-debuting Marco Polo has also been renewed for a second season, comprising another ten episodes, which will air on Netflix later this year. Netflix is also optimistic about the possibility of a fifth season of Arrested Development on their service, after the cult comedy series was revived for a fourth on the streaming service, and that contracts are being worked out with the cast at present. They also re-affirmed plans to develop a Netflix series inspired by spoof movie, Wet Hot American Summer, but it is still without release plans for now.

Keep streaming Eggplante for all news and updates on major Netflix Original shows.