James Gordon is confined to menial security duty at Arkham Asylum. Penguin continues his rise to power. Things aren’t looking great for our heroes for the midseason premiere of Gotham, “Rogues’ Gallery”, which picks up with Gordon already getting suspicious of some dirty dealings in the halls of the famously ineffectual mental institution.

Initially only having a kindly nurse as an ally, with a superior that is rearing to have him demoted even further, Gordon soon after meets Dr. Leslie Thompkins, played in a recurring role by Firefly’s Morena Baccarin, a pivotal character in the Batman mythos, although one that has been altered in some key respects for Gotham. While Thompkins has a heavy affiliation with the Wayne family in the Batman comics, and is one of the small handful of people that even knows Batman’s secret identity as Bruce Wayne, in Gotham, Thompkins is set up more as an ally to Gordon than to the Wayne family, at least for now. That’s fine, since she’s a good window into the darker side of Arkham Asylum, which certainly won’t turn out to be the safe haven for the mentally ill that the city hopes it will be. 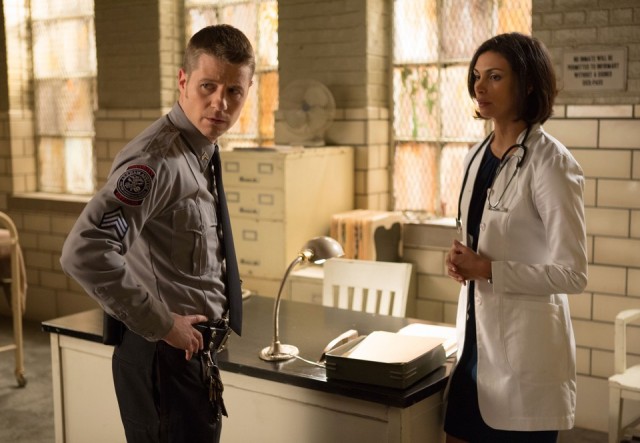 Interestingly, Bruce Wayne and Alfred were entirely absent from the midseason premiere, but that’s fine, since there isn’t really any room for them in the busy plot of this episode. Even Bullock and the GCPD didn’t make a return until around the halfway point, when Gordon finally just calls the police against his superior’s wishes, after he was threatened with severe punishment if he leaked word of inmates getting violently assaulted with electro shock treatment by another inmate.

Here however is where the chief problem with an otherwise decent midseason premiere comes in though; Its story is pretty shaky overall. There are far too many leaps in logic to ignore, and while some promising groundwork is laid for the proper introduction of Arkham Asylum on the show, it shouldn’t come at the expense of common sense. Yes, this is Gotham City, but there’s a fine line between being corrupt, and just being willfully malicious for maliciousness’ own sake.

First, Gordon’s superior not wanting to involve the police after inmates are targeted and assaulted makes no sense at all, especially when it’s revealed later on that he’s not actually a bad guy, and is as much a victim of the criminal as Gordon. I can understand not wanting bad press to get out when the corrupt mayor is trying to secure his platform, but surely the families of the inmates are going to raise a stink when they inevitably learn that their loved ones are vegetables. A smart asylum director would surely understand that it’s better to own up to an incident and control the information, rather than have whistleblowers control it for you, especially given that Gotham City’s citizens are already happy to resort to things as extreme as vigilanteism. It was just an unnecessary obstacle to create a forced conflict between the director and Gordon.

That was the smallest of the big plot issues though. The second issue came with the twist reveal that Gordon’s nurse friend is actually not a nurse at all, but an inmate! Get this, apparently, this woman hid in the basement after the closure of the initial asylum, survived all that time undetected… Somehow (again, does she not have family, or even records that would note that she’s missing?!), and feigned perfect functionality until dramatically convenient. Most glaringly of all, Dr. Thompkins herself completely failed to recognize an inmate in her own ward of the asylum, just because she was in a nurse’s outfit. Come on! Well, it didn’t matter in any case, since the nurse just ends up getting trampled to death after releasing the other inmates because… Because. So much for that development, especially when we learn that the nurse was also being experimented upon with electric shocks, and again, was completely 100% functional, despite that… Somehow.

Yes, Arkham Asylum has bad security. It has almost hilariously bad security by the time Batman is around. Again though, there’s a fine line between bad security, and sheer stupidity from otherwise sharp characters and supposed professionals. Both Gordon and Dr. Thompkins shouldn’t need to be told by a frantic Bullock that the crazy nurse is, well, a crazy nurse. Sure, Gordon is new, and wouldn’t have recognized the nurse as being an inmate, but there’s no excuse for Dr. Thompkins. Hell, Gordon’s a pretty terrible detective if he didn’t suspect anything was off as well. 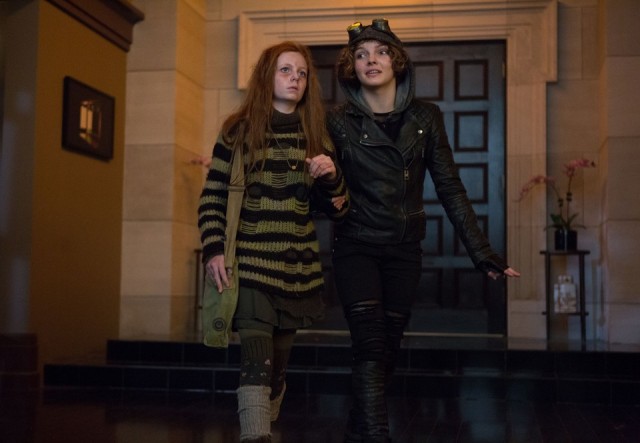 Anyhow, the perpetrator behind everything was one Jack Gruber, who also enlisted a strong, but emotionally primitive accomplice, Aaron Helzinger, and performed the electro shocks as a way of developing his talents, for some reason. Yes, Helzinger is another future Batman villain, being simple brute, Amygdala in the future. Gruber looks more than a little like Arkham Asylum’s most twisted academic, Hugo Strange, a villain that we know is coming to Gotham at some point this season, though he’s also been pegged in some previews as an early prototype for another minor Batman antagonist, Electrocutioner. Who knows. We’ll probably find out more next episode.

Outside of the business at Arkham, Selina rescues Ivy Pepper from a rainy alley, where she takes refuge in some garbage, and sneaks her into Gordon’s penthouse apartment, which he still owns from Barbara… Somehow. All this serves to do is allow Barbara to take the crowning moment of stupidity in an episode that already had a problematic storyline, when Ivy decides to play a prank on Barbara after she comes running back to Gordon, following Montoya declaring her renewed relationship with Barbara to be a mistake. Go figure. Ivy pretends to be a seductress, which has Barbara flying into a rage, and presumably with renewed hatred toward Gordon. Yes, seriously.

I’m aware that Ivy will ultimately be lethal seductress, Poison Ivy by the time Batman prowls Gotham City, and this was meant to foreshadow that, but no. There is no conceivable way that Barbara cannot tell the difference between a satisfied adult woman, and a giggling 12-year-old girl! What the hell did Gordon and Montoya see in this woman?! It baffles me that she’s a successful owner of an art gallery, since she’s clearly more brain-dead than Jack Gruber’s victims.

Yet again, the standout material came from the mob, specifically Penguin and Fish Mooney. Penguin spent most of the episode locked up at the GCPD, which was later revealed to be orchestrated by Sal Maroni as a lesson in hubris, after Penguin tries to raise the mob taxes on fishermen. The interactions between Penguin and both Maroni and Bullock were all exceptional, and made up for the rest of the episode’s story issues.

This is also true of the material with Fish, who conspired more with forces that wish to unseat Don Falcone, namely Butch, who actually had a great character moment for the first time this episode. An old friend of Butch enlists his help to betray Fish and steal Falcone’s chair for himself, which Butch initially seems to agree to. At the very end of the episode however, Butch confesses hoarding some meat that he stole as a child with his friend, with the friend saying that all is forgiven, and Butch thanking him… Right before he shoots the guy dead in his car, and drives off. It was a cool and powerful moment that made for a great way to end the episode, and again, helped to make up for some of the story issues.

“Rogues’ Gallery” was ultimately too uneven and patchy to make for a satisfying midseason premiere though. Gotham’s episode quality can wildly fluctuate at times, but it’s a shame that the show had to return on a bit of a sour note. At least the mob is still a great draw, and the first look inside Arkham Asylum is an appealing one, but with Gotham taking its first week off to return on the 19th, hopefully the showrunners can deliver a better new direction for the show’s 2015 run.