Microsoft has revealed the free Games with Gold offerings that Xbox Live Gold members can redeem for Xbox One and Xbox 360 this February. As usual, one free Xbox One game and two free Xbox 360 games will be on offer.

The new Games with Gold offerings go live on Sunday, February 1st. As such, if you haven’t yet redeemed Worms: Battlegrounds on Xbox One, or The Witcher 2: Assassin of Kings on Xbox 360, you have until this Sunday to do so! January’s free Xbox One offering, D4: Dark Dreams Don’t Die, will remain free for Xbox Live Gold members throughout the month of February.

Also as per usual with Gam

Anyway, throughout the entire month of February, Xbox One owners with Xbox Live Gold memberships can redeem #IDARB. #IDARB is an all-new Xbox One-exclusive indie game releasing for the first time on February 1st, and can best be described as a persistently evolving, multiplayer-focused minimalist eSports extravanganza. Not helpful? Well, it’s anyone’s guess as to how to even pronounce the title. Regardless, if you have an Xbox One, an Xbox Live Gold membership, and a taste for curious experiments, this is a reward well worth checking out with no price of admission. 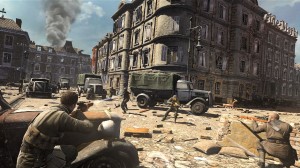 Between February 15th and February 28th, a full retail Xbox 360 game, ironically by the same publisher as Brothers: A Tale of Two Sons on consoles, 505 Games, will be offered, that being Sniper Elite V2. This third-person tactical shooter places less emphasis on direct combat, and has players dispatching foes using stealth and strategy as a highly skilled sniper during WWII. It functions as both a sequel and remake of the original Sniper Elite, sporting an altered narrative from its predecessor. Sniper Elite V2 is also available for PC, PlayStation 3 and Wii U.

This is a solid month for Games with Gold, with Brothers: A Tale of Two Sons standing as a particular highlight amongst the free offerings. The fact that #IDARB is multiplayer-dependent is a bit of a knock against the Xbox One selection, though at least the single-player D4: Dark Dreams Don’t Die will still be on offer for Xbox One gamers.

Keep revisting Eggplante for all news and updates on Games with Gold, and other Xbox incentives.