NOTE: Full spoilers for this episode of Parks and Recreation are present in this review

“Gryzzlbox” was about the unthinkable for Leslie; The town actually agreeing with her on a credible issue. True, the issue still came from hilarious circumstances, with an equally hilarious resolution, but apparently, after generously providing the town of Pawnee with presents provided by drone robots, well that heartless corporation has just gone too far!

“Gryzzlbox” got off to a strong start with presents that seemed almost creepily in tune with what each Pawnee citizen craves. This led to the revelation that the company was apparently data-mining E-mails and texts, leading to Leslie trying to put a stop to it, and the town actually being behind her. The town hall meeting where everyone outright declares things that they don’t want people to know about was very nicely ironic, and especially funny was the reveal that the only reason Ben missed the fine print in Gryzzl’s amendment allowing data-mining, is because the amendment was made on December 18th, 2015, the release date for Star Wars: The Force Awakens. Well, that makes sense! 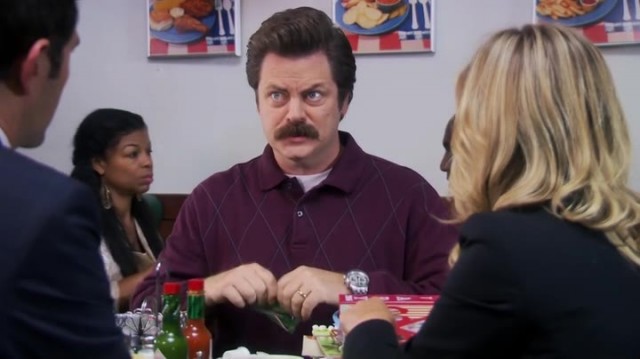 This episode also had a subplot about April having to find a new intern from the Parks department, and seeing herself in a younger girl that she tries to steer away, as well as another slightly larger subplot about Andy having to dispute the rights of his Johnny Karate character with his handlers. Andy is apparently uncharacteristically diligent on that show, revealing that he not only leads it, but also does janitorial duties, and even drives everyone home at the end of the day, for $100 a week. Apparently, this is the one time that April was sleeping on the job when it comes to keeping Andy on planet Earth.

Tom trying to be Andy’s agent in order to salvage the situation makes sense, and seeing him negotiate was a hoot. Best of all was when he gets the rights to the character back in Andy’s hands, which he secretly did by crying loudly until he annoyed Andy’s handler into returning the rights. Hey, whatever works! 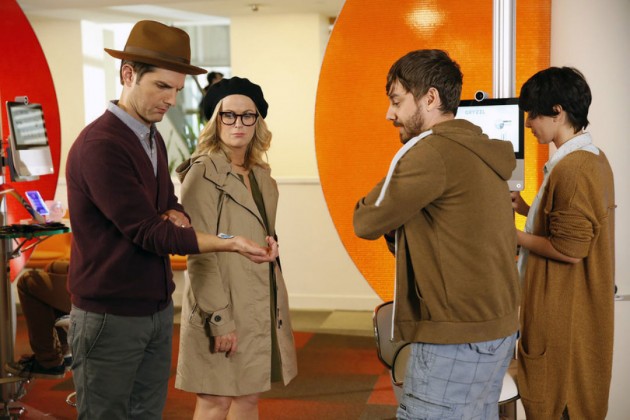 As for the April subplot, it was a bit less interesting, and honestly, April’s whole existential crisis has been one of the only weak spots in an otherwise stellar final season for Parks and Recreation. The end result of her finding a bunch of new interns for Craig was sweet, but the whole final plot currently around April’s character just feels odd and tedious. Maybe it will lead to a satisfying conclusion, but for now, it just feels like it’s overshadowed by the many other better plot developments going on.

Regardless, after a failed attempt to stop Gryzzl in the Perdple’s Court, another hilarious bit where Perd Hapley pretends to be a judge (and is clearly not a judge, as the disclaimers keep reminding viewers every time it’s brought up), it seems like Leslie is out of options, until Ron comes to her door holding a broken robot and a shotgun. Apparently, one of the Gryzzl present boxes went to his four-year-old son, violating his privacy, and that just will not stand. The episode then ends with Ron declaring that it’s time to take Gryzzl down. They have truly made a powerful enemy… 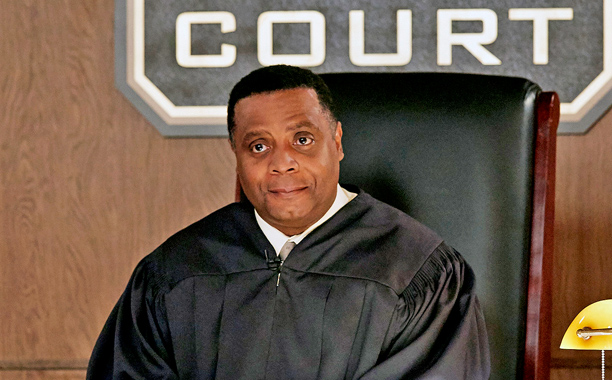 “Gryzzlbox” continues to have the final season of Parks and Recreation humming along on an excellent note. The episode did a great job of spotlighting a real-world issue in a hysterical context, and seemed to mark the beginning of the end for Gryzzl’s reign of candy-coated terror. Looks like, for better or worse, Gryzzl has buttered up the wrong town!