NOTE: Full spoilers for the series finale of Parks and Recreation are present in this review

A series finale is never easy, not to watch, nor to review. Parks and Recreation has been on for seven long years, being the little cult comedy that could, despite constantly being a ratings struggle for NBC. It’s tough to say goodbye to Pawnee at this point, very tough. Still, as far as a series finale goes, “One Last Ride” couldn’t have possibly been done better. It was the perfect farewell that this great show truly deserves.

The main plot of the final hour-long episode is actually quite simple; After the group reunites in the Parks department in 2017, someone complains about a broken swing, and Leslie motivates them to fix it together as, “One last ride” for the Parks group, before they all go their separate ways. As Leslie walks around interacting with the handful of key personalities in Pawnee, the episode plays out with glimpses into their futures.

This left the series finale being heavier on emotion and lighter on actual laughs (though certainly not devoid of laughs), but that felt most satisfying. Each character had a fitting and very uplifting future, which we saw in bits and pieces. Donna becomes a highly successful real estate agent and philanthropist in Seattle, April and Andy have children together after April’s initial hesitation, Ron gets to be the guardian of Panwee land under Leslie, Garry lives to be a hundred, and becomes the most frequently re-elected mayor in Pawnee history, and while Tom fails out of the restaurant business eventually, he gets a book deal, and finds success again anyway, as well as still being married to Lucy.

Everyone seemed to get the happy ending that they deserve. Even Jean-Ralphio got an amusing bit, where it appeared that he had died, though he and Mona-Lisa were actually running some sort of complex con. The scene ends with the two being chased off, and that’s probably the most blatantly funny moment of the finale.

When we see Leslie fretting over a reunion between the Parks crew, we get assurance that everyone eventually comes together again, after Leslie becomes a very successful governor of Indiana. We also get a long-awaited return appearance from Ann and Chris, after Rashida Jones and Rob Lowe left the show during Season Six. It was perhaps inevitable that Ann and Chris show up again for the series finale, but seeing Leslie and Ben catch up with them was both funny and heartwarming. You don’t realize how much you miss Leslie’s adoring Ann metaphors until you realize just how long they’ve been gone for. 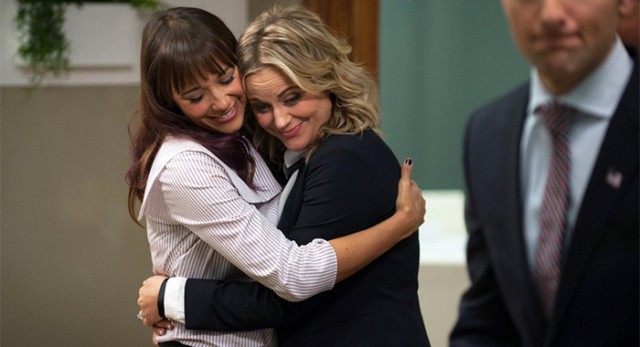 After all is said and done, Ron fixes the broken swing pretty quickly, and the complainer isn’t too thankful about it. Leslie’s blunt response, “Yeah, that’s about right” was quite funny, and pretty fitting for Pawnee standards. As the episode winds down, the Parks crew prepares to take a photo together, with Leslie saying that she is ready. It’s at that point that the episode ends, with a sequence of bloopers from throughout the series playing over the final credit roll.

Again, saying goodbye to any good TV show is like saying goodbye to a good friend. Parks and Recreation seemed to be fully aware of this, and felt like it embraced the audience that’s stood with it for all of these years, just as Leslie embraced all of the other personalities that she’s stood with and against all along the way. Fortunately, there were happy endings all around, which helped ease viewers into parting with the series after so much time.

“One Last Ride”, against all odds, delivered everything it was supposed to for a series finale. It sent every character off on the perfect note, and it assured fans that everything was going to be ok. Their memories in Pawnee can be re-lived on DVD’s and the like, and the show loves the fans as much as the fans love the show. Maybe the series finale didn’t have the biggest laughs in the history of the series, but it didn’t need to. It had a whole lot of heart, and that’s really the best thing that it could have brought to the table. 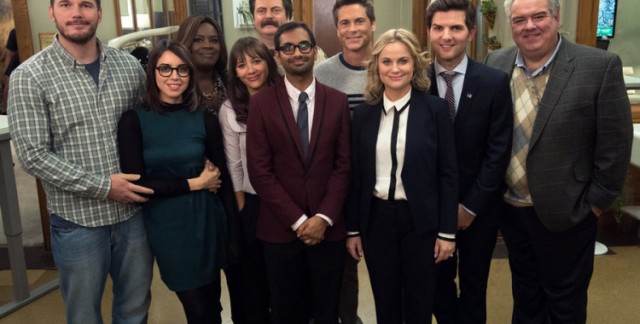 So, I join the rest in saying, happy trails, Pawnee. Thanks for the memories, the laughs, and the love. Your zany antics will most certainly be missed, as this truly was one of the best comedies in television history.

Parks and Recreation Series Finale: "One Last Ride" Review
Parks and Recreation sent off Pawnee with a brilliant and highly heartfelt series finale, showcasing a great future for the show's familiar personalities, and leaving us on a very happy, satisfied note.
THE GOOD STUFF
2015-02-28
100%Overall Score
Reader Rating: (5 Votes)
40%