We’ve hit the final episode of what’s proven to be a surprisingly awesome Marvel miniseries. “Valediction” sees the final battle against Leviathan, or at least, Dr. Ivchenko and Dottie, who plan to douse Times Square in Stark’s Midnight Oil, threatening the lives of millions of people.

As with “Snafu” during the previous week, “Valediction” was a superb episode, and a great one to cap off the miniseries with. The only gripe with it is the fact that it feels like Leviathan’s true size and depth was never really tapped into. The only villains at the end of the day are Ivchenko and Dottie, and it feels like the rest of the organization is unfazed, left to conspire for another day. Then again, maybe this isn’t so bad, as it does leave the door open for a much-demanded second season for Agent Carter. 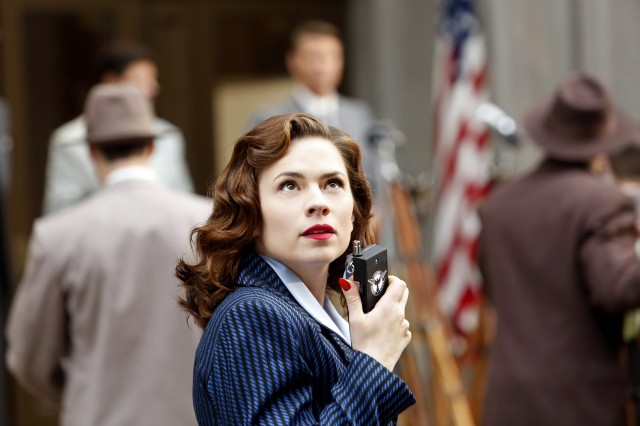 In any case, the episode delivered another cool Captain America connection with the reveal that Dr. Ivchenko’s real name is Johann Fenhoff, a.k.a. Captain America villain, Doctor Faustus. This would explain his seemingly supernatural ability to hypnotize to the point of controlling minds, and delivered another cool connection to the Marvel Universe at large for Agent Carter.

Howard Stark also finally returns, though he is captured by the villains, who take control of a police officer. The cop is killed, and Howard is next put under Faustus’ control, believing that he is rescuing Captain America, when he’s actually about to deploy his deadly invention on Manhattan. In a race against time, Peggy, Thompson and Sousa must stop the bad guys and win the day, with Peggy taking on Dottie, as Faustus continues to ‘coach’ Howard over the radio.

The final battle between Peggy and Dottie is action-packed and very cool, and it’s very satisfying to see Peggy hold her own against a proto-Black Widow in a true fight to the death. The fight’s conclusion feels a little abrupt, as Peggy eventually just easily knocks Dottie out of a window, where she appears to land head-first on a plane wing in Stark’s hangar and dies, but the fight is cool nonetheless. 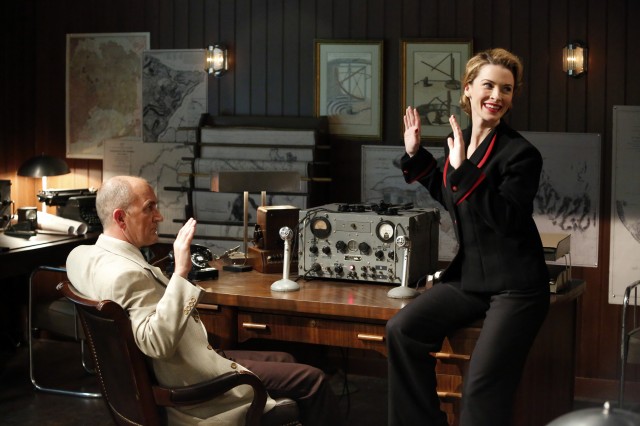 Somehow though, Dottie appears to get away, despite leaving a blood trail, and no doubt having massive head trauma. The show doesn’t do a good job of explaining this, and it feels like Dottie was originally meant to die, before Marvel and/or ABC decided that they should have her live as another way to open the door for more Agent Carter in the future, but whatever. Chalk it up to another Marvel soap opera moment. Even the Marvel Cinematic Universe has had a good handful of them already.

As for Faustus, the way that he’s eventually cornered by Thompson and Sousa is very cool as well. Thompson gets clonked on the head and knocked out, leaving Sousa as the only remaining agent. Faustus attempts to get Sousa to aim the gun at Thompson and fire, with Sousa gradually moving closer and closer… Until he knocks out Faustus! Apparently, Sousa was wearing earplugs the whole time, and wisely thought ahead. The curt line, “Was he saying something?” to Thompson afterward was also very funny, especially since it really did appear like Faustus had won for a minute, thanks to his uninterrupted speech.

The climax continues on an exciting note from here, as Jarvis must pursue Howard in another plane, debating whether or not to shoot him down, and unwittingly erasing Iron Man from the modern Marvel Cinematic Universe. Of course, since we have enjoyed Iron Man for a while, Howard obviously isn’t shot down, and Peggy manages to snap Howard out of his hypnosis long enough to bring him home without incident. Phew. New York, Howard and Jarvis are all safe. 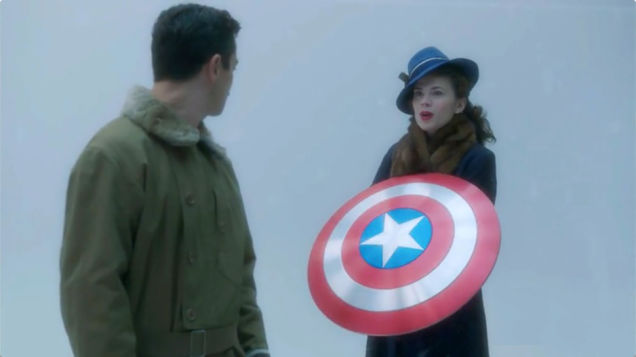 As Peggy returns to the SSR the next day, she’s met with applause and celebration from her colleagues, which is extraordinarily satisfying to see. We see the president give Thompson credit for the operation, which is perhaps disappointingly fitting, though Peggy confessing to Sousa that she cares about her personal opinion of self-worth and no one else’s, still felt like a decent way to cap things off at the SSR. This also leads into a very touching and heartbreaking final scene where Peggy dumps the sample of Captain America’s blood over the side of a bridge, saying, “Goodbye, my love.” It was a perfectly beautiful ending to a superb Peggy Carter story, one which Hayley Atwell predictably nailed, even if we haven’t yet glimpsed the true birth of S.H.I.E.L.D.

But, in true Marvel fashion, we do get an epilogue as well. After Faustus is locked in a cell, his cellmate turns out to be none other than… Arnim Zola! This was an awesome surprise, particularly when Zola talks to Faustus about having a plan for HYDRA’s resurrection, and that Faustus is going to be a key part of it. Exciting stuff indeed, even if you no doubt know Zola’s plan already, if you’ve seen Captain America: The Winter Soldier and/or any recent episodes of Agents of S.H.I.E.L.D. 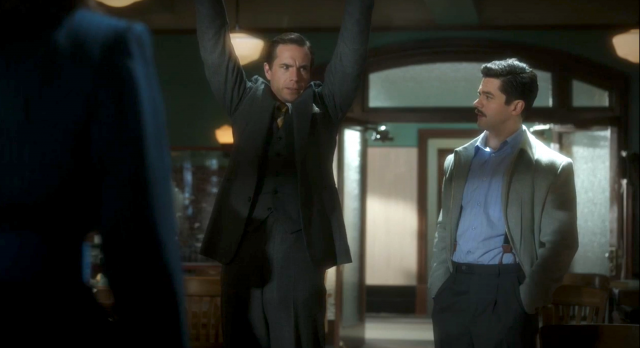 “Valediction” was an excellent conclusion to Agent Carter, even if it still begs the question of what Leviathan truly is, and how Peggy first puts S.H.I.E.L.D. together. There are some unanswered questions, but hopefully this just provides incentive for a new season of Agent Carter somewhere down the line. For now though, this first batch of eight episodes has been a true joy, marking another highly successful experiment for the brilliant artists at Marvel Studios!

Agent Carter Episode 8: "Valediction" Review
Agent Carter came to a thrilling and highly satisfying end with "Valediction", though it does leave some unanswered questions, and leaves plenty of room for a second batch of episodes in this experimental miniseries!
THE GOOD STUFF
THE NOT-SO-GOOD STUFF
2015-02-28
92%Overall Score
Reader Rating: (1 Vote)
93%