After being faced with the futility of trying to do the right thing when a dangerous criminal targets a family, “Hero”, despite its ironic title, seemed to go in the opposite direction as the previous episode, “Nacho.” It seems as if Jimmy McGill has already entirely forsaken the idea of being a good man, and decides to tap into his darker side, finding far greater success. This is no doubt a testament of things to come, when he completes his transformation into Saul Goodman for the events of Breaking Bad.

The way that the episode is set up and executed is brilliant. It begins with a flashback to Jimmy as a young adult, back when he was, “Slippin’ Jimmy”, tricking someone out of their money by pretending to stumble on a rude drunk with a valuable (albeit cleverly fake) watch. The drunk is an accomplice of Jimmy’s, and this is a grift they’ve pulled many times, with plenty of success. Given the flashback at the start of “Nacho” the previous week however, it looks like things won’t go great forever.

It seems that this frame narration is becoming a regular occurrence for Better Call Saul, but it works very well. It’s a self-aware reminder that these events are happening out-of-order, with Jimmy/Saul’s origin being told after the conclusion of Breaking Bad, and an even further window into the past is also necessary to understand exactly how Jimmy became Saul. We know how the story ends, but these little teases of the layers behind Jimmy’s past create a lot of intrigue for this spin-off series, particularly for fans of Breaking Bad.

Anyway, after Jimmy exposes the Kettlemans, he’s faced with the chance to take a bribe. This is the one point of the episode where Jimmy’s morals kick up, as he keeps insisting that he can’t take bribes, even if it means having to turn the Kettlemans in. He proposes an alternate solution, that the Kettlemans hire him as their lawyer (another foreshadowing of Saul Goodman eventually specializing in defending guilty people), but they refuse, with Mrs. Kettleman even making the effectively prophetic observation, “You look like a lawyer guilty people hire”, point blank. Well, we can’t have Saul Goodman surfacing too quick in any case, can we?

So, Jimmy takes the bribe, and already, his morals go out the door when he thinks of what to do with it. Targeting his brother’s former law firm, Jimmy declares aloud, “On this rock, I will build my church.” Perhaps Jimmy’s intentions aren’t quite as ill as they will be at this point, but it’s another great line that will tickle fans of Breaking Bad.

After making a massive billboard that is blatantly meant to plagiarize Hamlin, Hamlin & McGill, his brother’s old law firm, Jimmy is naturally called out on his copyright infringement, following a hysterical montage of how Jimmy tries to replicate Howard Hamlin on his advertisement. It’s a case that Jimmy was bound to lose, and he’s forced to take the billboard down, just as he fails to get any reporters to try and cover the story, forcing him to enlist some snotty university students.

But the twist comes in when this is revealed to be all part of Jimmy’s plan. As the billboard is being taken down under the guise of Jimmy lamenting his “case”, the worker appears to slip and fall, and Jimmy is left to climb the construction ladder to pull the man to safety. Yes, it’s another accomplice, with Jimmy staging the whole spectacle to rake in clients, while simultaneously sticking it to his brother’s former firm. Wow. 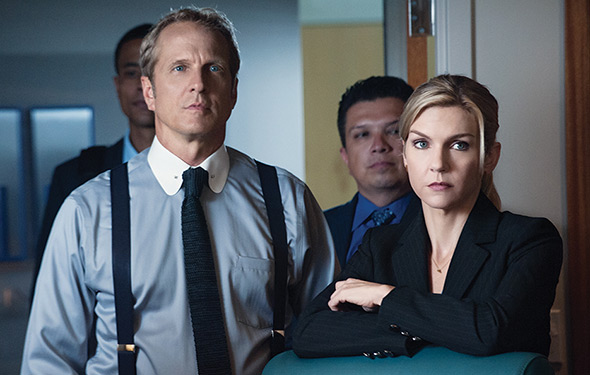 Already, Jimmy is shown to be a very shrewd character, and while amoral, this result proved very satisfying. Jimmy’s still got it, and he’ll only have more of it as the show goes on, and Breaking Bad unfolds.

He even comes that close to sneaking the incident around his brother as well, hysterically trying to hide the paper covering his story. This leads to Chuck wrapping himself in a foil blanket and rushing to a neighbour, stealing their paper and leaving some money, to see Jimmy’s rescue effort. Naturally, Chuck immediately puts together that Jimmy is up to no good, and that’s where the episode ends.

Once again, Better Call Saul just knocks it out of the park. “Hero” proved to be one of the most enjoyable episodes yet, continuing to peel back the curtain just a bit more at the genesis of Saul Goodman. Despite being a spin-off, it doesn’t feel like a lesser show to Breaking Bad, with its more outwardly cheeky, yet no less tragic portrayal of a criminal lawyer-in-the-making being just as entertaining to watch, if not more so. Breaking Bad may remain the more dramatically impressive show of the two, but Better Call Saul effortlessly stands alongside it with its slightly more chipper look at an equally sorry soul.