NOTE: Full spoilers for this final episode of, “The Walking Dead”, along with some spoilers from the finale of the, “Walking Dead” comic books, including multiple major character deaths, are present in this review

It’s the end of an era for cable television.

Say what you will about the exhaustive run of AMC’s mainline The Walking Dead series, but it certainly must be commended for all that it’s accomplished. Sure, the series has largely fallen from grace in recent years, with merely a fraction of its once gargantuan audience staying along for the last stages of this ride, but a cable drama series running for a staggering eleven seasons, in any genre, on any cable network, is undeniably amazing.

For horror television in particular, The Walking Dead objectively stands as one of the biggest achievements in television history, adapting the entire 193-issue run of its source comics in some shape or form, over the course of its twelve years on the air. That’s a lot of storytelling for the show to satisfyingly pay off in a series finale, even putting aside the fact that AMC is defiantly proceeding ahead with at least three Walking Dead spin-off shows to come, starting in 2023 with the Maggie/Negan vehicle, Dead City. That’s also before considering that prequel series, Fear the Walking Dead is preparing to enter its eighth season next year, critical and audience scorn be damned, plus the fact that anthology series, Tales of the Walking Dead hasn’t been cancelled at this point.

This glut of continuing spin-off media sadly diminishes the impact of AMC wrapping up the original Walking Dead series, even after its landmark eleven-season run. What diminishes this milestone most of all however is the fact that The Walking Dead’s last episode, “Rest in Peace” is a frustratingly underwhelming final bow for a show that’s long past its prime, one that struggles to balance its action, terror and drama to fully satisfying effect.

As this final episode begins, Daryl is rushing a dying Judith into a Commonwealth hospital, one that’s now without doctors and most medical tools, seeing as Pamela Milton has absconded with all of the Commonwealth’s crucial manpower and resources. A horde of walkers has fully besieged the community’s interior at this point, with Pamela and her troopers now holed up in the upper class ‘Estates’ area of the Commonwealth to avoid them, thus leaving the lower classes of the Commonwealth to die. This forces the series’ survivors to fight back against legions of walkers, while also trying to save as many Commonwealth citizens as they can, before taking down Pamela once and for all. Early on, Jules and Luke become two of this finale’s first casualties during the climactic effort to save the Commonwealth, though this doesn’t hit as hard as the big centerpiece death among the heroes, seeing that Jules has barely had a presence on this show, and Luke has barely appeared throughout this final season. 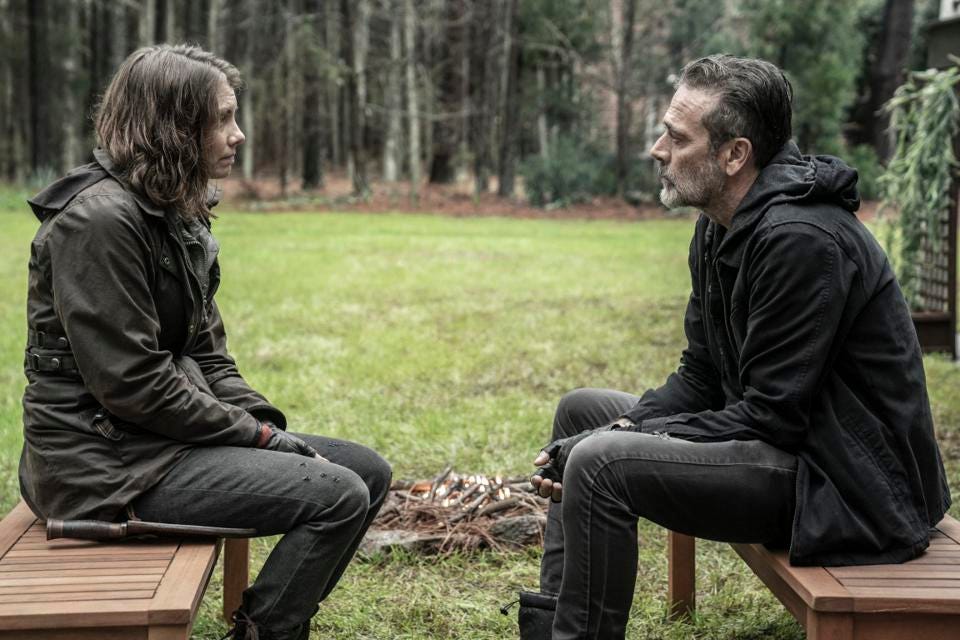 The centerpiece death, on this note, is Rosita (not Judith, who survives her injuries in the end), with Rosita sustaining an irreversible walker bite on the shoulder while saving Coco. Eugene and Gabriel manage to get to safety without injury, but despite Rosita seemingly surviving a fall into a group of walkers, Eugene learns that night that Rosita was indeed bitten, and is hiding it from her friends. Boy, doesn’t that feel like a quaint throwback to this show’s early storylines? In any case, Rosita’s sacrifice, one further fueled by the nobility and beauty behind her final moments with her allies, is emotional, well-performed, and well-executed. Also, unlike Luke and Jules, Rosita has been a part of The Walking Dead’s cast for the majority of the series’ run, so her loss is felt a lot more, especially considering that she’s been a major part of the series’ climactic Commonwealth arc, and has a ton of tight-knit relationships that she’s leaving behind.

Likewise, Maggie and Negan finally fully address the elephant in the room during this finale, regarding Negan’s murder of Glenn, and exactly how it’s broken Maggie over the years. Negan finally fully apologizing for killing Glenn, and Maggie admitting to Negan that she can never truly forgive him, but she’ll try to coexist with him anyway, is one of the most impactful dramatic moments that her character has ever delivered on The Walking Dead, and that’s saying a lot! Likewise, Lauren Cohan and Jeffrey Dean Morgan deliver some of the best, most emotional performances of this entire season during these scenes, even with the tough competition of Rosita’s final moments. This is the one point where this series finale feels like it’s actually not compromised by the reality of The Walking Dead’s heap of upcoming spin-off shows, which AMC inexplicably announced before ending the flagship Walking Dead series, thus confirming in advance that Daryl, Maggie, Negan and Carol (back when Carol was meant to join Daryl in his own spin-off show), will inevitably survive to the end of this show. Maggie and Negan resolving the last of where they stand after Glenn’s death actually gives their future partnership some nice dramatic weight that they can bring to Dead City next year, making it a bit sweeter that Dead City appears to be the first new Walking Dead spin-off series that AMC will be launching in 2023.

Another issue working against The Walking Dead’s final episode is that it inevitably has to change the ending of its story, when compared to how its source comics ended. There’s already been a major deviation in the TV canon on this note, one that places Pamela Milton as the TV series’ final antagonist, instead of Sebastian Milton, who occupied the final antagonist role in the comics. In this TV adaptation’s case, Sebastian was instead killed off earlier this season, likely because Sebastian’s big, climactic act from the comics, namely successfully killing lead hero, Rick Grimes, complete with reanimation, obviously can’t happen in the TV narrative. TV Rick is still lost somewhere far away from the Commonwealth, after all, and in fact, both Andrew Lincoln and Danai Gurira make some quick cameos as the TV series’ Rick and Michonne during this finale’s ending scenes, foreshadowing their own spin-off series, as well as the continued presence of the Civic Republic Military from The Walking Dead: World Beyond. Rick has even fled the CRM, all the way to Bloodsworth Island in Maryland, seemingly teasing the approximate setting of his spin-off show, before he ultimately ends up captured again.

On the note of final villains, this is another point where The Walking Dead’s final episode really falls flat. To be frank, the Commonwealth arc was already a very bumpy finale for the Walking Dead comic books, made worse by the fact that it seemingly wasn’t originally mapped out as an end to the comics’ run, like it ultimately ended up being. Thus, it was inevitable that the TV series would also struggle to make a truly worthwhile ‘final boss’-level obstacle out of the Commonwealth, especially with Pamela Milton now being subbed in as the show’s climactic antagonist, rather than the comics’ Sebastian.

Pamela Milton just isn’t a very good ultimate enemy for the series, by any metric; She’s not threatening, she’s lost almost all of her best weapons by this point, and the fact that this episode begins with Pamela simply hiding in a mansion like a coward immediately deflates her ability to be an imposing final threat. The pitiful way that she goes down is even less satisfying, with Pamela simply being arrested and hauled off-screen without incident, before she taunts Daryl and Carol about the, “Hard choices” that are necessary for civilization to prosper; Hard choices that this finale never addresses or resolves, instead simply claiming that virtually all of the survivors lived happily ever. Granted, this Hollywood ending does feel a little satisfying after eleven seasons of zombie-infested hell (which will be continuing for Daryl, Maggie, Negan, Morgan, Rick and Michonne, at minimum), though it’s also a pretty hefty tonal shift for a famously dark, death-filled TV series like The Walking Dead.

“Pamela Milton just isn’t a very good ultimate enemy for the series, by any metric.”

This leaves the Commonwealth’s invading walker horde to be the real climactic obstacle in this series finale. That threat also doesn’t work as well as it should have, thanks to that infamously idiotic horde invasion in Alexandria from The Walking Dead’s sixth season, wherein everyone just cleaned up the walkers with some elbow grease and can-do attitude, without fatalities or further incident. Considering that the Commonwealth is much bigger, has far more hiding places, and possesses a much larger inventory of weapons than Alexandria ever had, simply mixing it up with the dead one last time (at least on this show), feels like an underwhelming final danger. The way that the horde is hastily and choppily dispatched with a poorly-edited series of explosions, as triggered by a bunch of fuel barrels that the survivors are somehow able to grab and place around the Commonwealth Estates, again, somehow without incident or further fatalities, is especially stupid and frustrating. It’s a spectacular moment in concept, but it’s also very poorly-shot, and it doesn’t feel effectively set up or executed, instead feeling like a cheap, lazy way to eliminate a walker invasion, a story device that The Walking Dead keeps writing itself into a corner with every time.

It’s a bit unfortunate that AMC spent a ton of money on a Hollywood-style wrap party for The Walking Dead’s conclusion, complete with a Los Angeles theatrical premiere, life-size walker dioramas, and a televised airing of the start of said premiere before the actual series finale’s airing, considering that The Walking Dead’s last episode is very disappointing. Then again, I can’t say that I’m particularly shocked about this, personally. Like I said, The Walking Dead has been past its TV prime for at least five years at this point, and even its source comics struggled to deliver a consistently strong ending beforehand. Thus, it feels inevitable that The Walking Dead’s TV run would see a similarly awkward conclusion, one that can’t land with the proper impact as it stands, considering AMC’s extensive spin-off designs for the franchise.

The majority of The Walking Dead’s massive roster of surviving characters do see some heartwarming, if contrived resolutions to their various storylines at least, with Rosita’s death providing just enough of a bittersweet feel to an ending that otherwise seems uncharacteristically optimistic, considering the relentlessly bleak tone of this world. Still, too much of this final episode simply fails to land effectively. Despite this finale’s decent setup for The Walking Dead’s planned trio of upcoming spin-off shows, and a few heartwarming moments that work well enough for fans, “Rest in Peace” is ultimately lacking when it comes to real excitement and stakes, especially when it predictably fails to make a worthy villain out of Pamela Milton. The action and horror elements simply don’t function well enough here, resulting in an underwhelming ending for The Walking Dead that often works best during its quieter, character-driven moments, as opposed to its efforts to be memorably fun and spooky.

Either way, it’s not like AMC is stopping the Walking Dead TV train anytime soon, despite the original Walking Dead comic books, and the standout Telltale adventure games they inspired, having ended several years ago now. One disappointing ending to a series, even a flagship series, is simply the latest chapter in a seemingly endless saga of zombie-killing. So, whatever Walking Dead followers still remain will no doubt have a new distraction soon enough anyway.