The title of this episode pretty much says it all. “Red Hood” introduces the titular gang leader, with Batman fans hoping that it would continue tying into the origin of The Joker, which was first hinted at in the previous episode, “The Blind Fortune Teller.”

Well, no such luck. “Red Hood” puts the Joker material completely aside, instead simply focusing on the mythology of the Red Hood itself. That works better though if I’m being honest, since trying to work in a Killing Joke-esque origin tale into Gotham already would feel rushed and unsatisfying for the Clown Prince of Crime. It was good to just have an episode that didn’t feel the need to keep calling back to top-tier Batman villains-to-come. 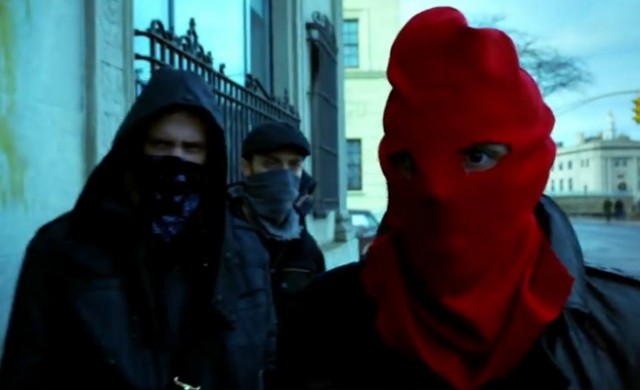 The material with Red Hood was also done incredibly well on its own merits as well. The ridiculous mythology of the hood was explored with just the right dose of comedy and amusing tragedy, with any wearer of the hood seeming to invite bad luck as much as they were public adoration, particularly when the original wearer gets the bright idea to throw money into the streets so that the public swarms it, and the cops are cut off from them. It also provides a neat contrast to many of the villains that the show has portrayed up to this point, having a sort of 1930’s-esque romantic outlaw gang that the public finds cool and appealing, creating an interesting new challenge for both Gordon and the GCPD.

By the end however, Gordon and the cops inevitably take down the gang of generous bank robbers. That would seem to be it. The show cleverly addresses the result however, with Gordon saying that as long as someone is willing to put on the hood, this gang will go on forever. It’s a neat pseudo-reference to the symbolism behind characters like Red Hood, and the future hero of Gotham City, Batman, especially when that’s exactly what happens. A passerby picks up the hood (which Gordon for whatever reason tossed away, rather than keeping for evidence like he’s no doubt supposed to), and makes a gun gesture towards the GCPD. The Red Hood lives on indeed. 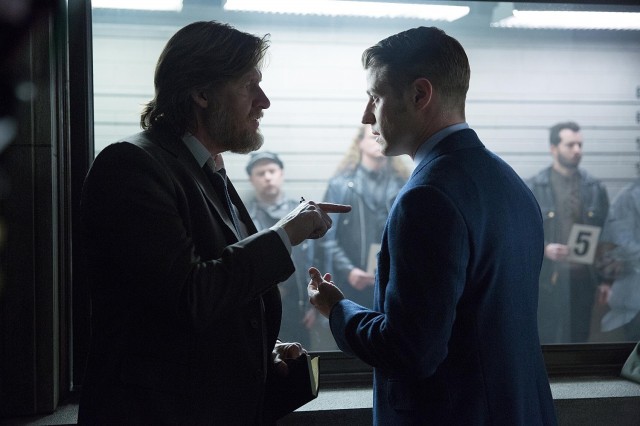 Aside from the effective Red Hood material, Alfred actually got a great story worth his salt in this episode. A former war mate of Alfred’s, Reginald Payne, is invited to stay in Wayne Manor for several days, at which point he dredges up Alfred’s violent past in front of Bruce. Reginald even trains Bruce in more aggressive, cold fighting styles, before Alfred intervenes. This proved to be a powerful moment, as Reginald commanded Bruce to continually hit him as hard as he can, almost demanding that the boy punish him, but no doubt having some twisted lesson behind it.

Despite a neat bonding moment with the bunch over some very expensive wine however, Alfred eventually prepares to send Reginald on his way, believing that he’s an unwelcome reminder of the past, and a bad influence on Bruce. This leads to Reginald being caught thieving from the mansion, and stabbing Alfred so that he can get away. Naturally, Alfred doesn’t die, which is predictable, as he must be the caretaker of Bruce during his career as Batman in the near-future, though he is hospitalized, and leaves Bruce that close to having no one.

An even greater twist is had from here as well, when it’s revealed at the end of the episode that Reginald was hired by Wayne Enterprises to spy on Bruce, and see how much he actually knows about the company’s dealings. It’s plain as day now that Wayne Enterprises is really up to no good, though there’s still a good bit of mystery surrounding what they’re actually doing. With five episodes left before the season finale, here’s hoping we find out soon. 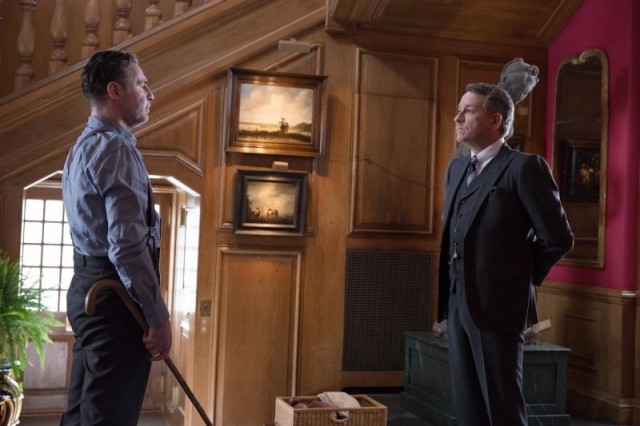 Lastly, we got to see Fish meet with the sole remaining proxy of whoever is in charge of her prison. After seeing an operation where body parts are stolen from the prisoners, Fish demands to speak with the man in charge. Turns out, the prison is run by a Doctor Francis Dulmacher, who is Gotham’s incarnation of DC villain, The Dollmaker, first teased in this show’s second episode. That was a cool twist, as was Fish’s act of defiance by stabbing her own eyeball out with a spoon and crushing it, after Dulmacher’s proxy threatens to kill her for her own eyes. Damn! That’s probably the most gruesome scene that Gotham has had yet, even if the prosthetic used for Fish’s eyeball was pretty unrealistic-looking. Still, Fish is clearly a woman who doesn’t mess around, as if we needed any more proof of that.

As for Penguin, he’s still bumbling about his struggling club, and not much of value happens there. He’s still too inexplicably inept, and I do hope that the club tanking is somehow another part of his shrewd planning. It’s difficult to explain this out-of-character behaviour for Penguin otherwise.

Gotham did quite well with “Red Hood” overall though, giving the Joker teases a rest, and instead just highlighting some great villains, along with some very worthy material for Alfred and Bruce, a disappointing rarity in a show that’s meant to serve as a prequel to Batman’s career in Gotham City. The mob material is still coming second to the GCPD, and now Wayne Manor, but at least this episode did a great job of balancing fun and mystery with its title character. Given Gordon’s (accurate) observation about Red Hood, hopefully we see another take up the mantle, even if it will no doubt be next season at earliest.

Gotham 1.17: "Red Hood" Review
Gotham created a compelling origin for its title villain in "Red Hood", wisely not forcing any Joker tie-ins, while Alfred and Bruce also got a strong plot, though still at the expense of the floundering mob material.
THE GOOD STUFF
THE NOT-SO-GOOD STUFF
2015-02-28
85%Overall Score
Reader Rating: (0 Votes)
0%