The Walking Dead saw an improvement after the disappointing “Them” from the previous week, now leaving Aaron to face the staredown of a super-distrustful Rick, as he pleads about his apparent shelter.

The entire first portion of the episode simply involves Rick aggressively questioning Aaron about this camp he claims to have. You can see the exasperation and desperation in Rick’s eyes, no doubt impairing his judgment to a point, though this also goes to show the true hardship of the group’s recent journey better than “Them” ever did. At this point however, even Michonne is exercising a softer approach, with only Rick left to poke holes in what seems like a pretty great deal, considering what the group has recently been through.

Though the rest of the episode was solid, I must say that Rick being as distrustful as he is is getting rather old at this point. Rick was clearly grasping at straws when it came to distrusting Aaron, who clearly has nothing to hide, and has evidently told nothing but the truth. This really comes to a head when Rick insists on taking a different route to Aaron’s lone partner, instead opting to take a route full of Walkers, at night, endangering his party anyway. Really, Rick? Even Aaron himself points out that if they wanted to ambush Rick’s group, they’d do it in the barn, not in the open where they could easily escape.

So, Rick came off as a bit of a stupid jerk in this episode, though after the succession of deaths we had in this season’s halfway point, mercifully, no one was killed. No harm, no foul, I suppose. There was another moment where the showrunners blatantly screwed with fans who believe Glenn will soon bite it, having a Walker almost get the drop on him before Aaron rescues him, but those moments are starting to lose impact at this point. 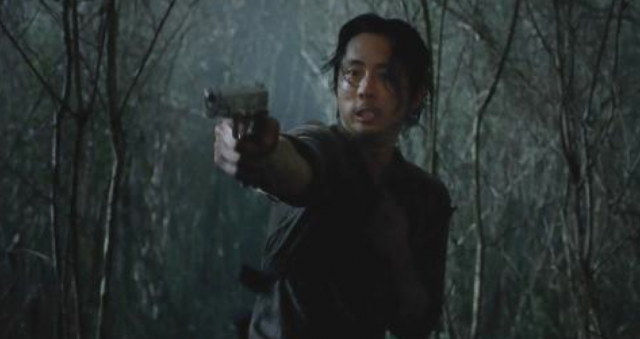 Regardless, Aaron is reunited with the one partner he claimed to have, once again revealing him as honest. The partner, Eric, also happens to be Aaron’s boyfriend, which explains why Aaron was so desperate to reunite with him. It was a sweet twist, though Rick almost ruined it by insisting that Aaron sleep alone on the floor after finding Eric again. Seriously, Rick, chill the hell out! I know the group has been through a lot, but you’re just making yourself look bad at this point.

Fortunately, after all of that drama, Rick relents on going to Aaron’s camp. The episode ends with the group being driven in, hearing the vague sounds of happy children and families. Maybe they’ve finally found peace… Though the show has already been picked up for a sixth season, so probably not.

Again, there’s ultimately very little to say about “The Distance”, but it was monumentally more interesting than “Them.” It’s interesting to see Rick cracking more than anybody else at this point, even if this was something that the show already explored in Season Three, though he really needs to lighten up. Maybe next episode will actually settle things down a bit, and we can have something a little more uplifting, after the almost suffocating bleakness of the past few episodes, even for this show’s standards.

Still, “The Distance” is another step in the right direction for Season Five. It will be interesting to see how the showrunners can turn Aaron’s camp into yet another trap or failed sanctuary, but at least it shouldn’t be difficult to keep watching in that case, even though the journey could have ended here with satisfaction all around.

The Walking Dead 5.11: "The Distance" Review
Rick's hard-assed distrust is getting old at this point, but the dramatic tension of debating Aaron's camp, and a botched highway romp, still made "The Distance" a competent episode of The Walking Dead
THE GOOD STUFF
THE NOT-SO-GOOD STUFF
2015-02-28
83%Overall Score
Reader Rating: (1 Vote)
100%