The Flash may already be settling into a hiatus for a month, but Arrow squeaked out one additional episode before taking several weeks off for its mid-March return. “Nanda Parbat”, as its title suggests, brought the League of Assassins back into proceedings, though it ended with a twist that viewers no doubt wouldn’t expect.

That comes before the first twist however, when Malcolm Merlyn is captured by the League, after Thea tips them off to his location (so much for being Merlyn’s soldier). Oliver must then do the unthinkable, and rescue his nemesis from Nanda Parbat with Diggle’s help, so that he can continue training to battle Ra’s Al Ghul. Naturally, Laurel, Felicity and Roy are against this, but Oliver isn’t given much choice, even though his previous attempt to make contact with Ra’s ended in his apparent death. Even Diggle fights Oliver on the decision at first, but joins his rescue effort anyway, when it’s clear that Oliver’s mind can’t be changed.

With Thea learning of her role in Sara’s death during “The Return” the previous week, we see the secret come out in a great, poignant way. The most emotional moment of all is predictably when Thea confesses her unwitting deed to Laurel, who forgives her, and assures her that the fault is Merlyn’s. Laurel even then gets the brilliant idea to draw Merlyn out in a fake duel, so that the League can capture him. It’s probably one of the most shrewd things that Laurel has yet done in her time as Black Canary, and was a great way to play with the expectation that Laurel obviously can’t take Merlyn in a fight.

Of course, this still means that Oliver and Diggle have to try and reclaim Merlyn, and it’s not long before they’re captured, with a captive Merlyn being used as bait. So close, and yet so far. The tension wasn’t totally there, since they were found and caught so quickly, but at least this still led to better moments.

The following scene between Oliver and Diggle is fantastic, particularly when Diggle announces his intent to re-marry Lyla to Oliver, and asks Oliver to be his best man. Oliver accepts, glad that Diggle got the question out when the two would most likely die, and it was another great bonding moment with this duo, who have always been one of the best teams on Arrow, even with the sheer amount of people coming in and out of Oliver’s lair by this point.

The biggest shock was yet to come though, as Oliver is brought before Ra’s Al Ghul, believing that he is about to die. Instead, Ra’s tells him that someone else must eventually lead the League of Assasins, and he commends Oliver on his bravery, strength and fortitude. Then, Ra’s offers Oliver the job. Yes, Oliver has been offered leadership of the League of Assassins! The episode then ends right there.

It seems predictable that Oliver will turn down the offer, as we wouldn’t have a show otherwise, and perhaps this is the final push into making Ra’s Al Ghul the big bad for Season Three, more so than Merlyn. Regardless, it’s a big twist to end Arrow on before it’s off for three weeks. It should be very interesting to see where the show goes with this startling moment when the series resumes in the middle of March.

As much as this episode was a big moment for Merlyn, Oliver, Ra’s Al Ghul, Diggle and the League of Assassins, it was also a big moment for Ray Palmer, surprisingly, on two different counts. After Felicity becomes frustrated with Oliver’s apparent death wish, after he announces that he is returning to Nanda Parbat to re-take Merlyn from Ra’s Al Ghul, she devotes her attention to Ray, who is neglecting his company’s responsibilities after becoming obsessed with completing his A.T.O.M. suit. Felicity talks Ray into a hot meal and a shower, and soon after, they kiss and end up sleeping together. Yes, we all knew it was coming, given that Arrow hasn’t been shy with playing up the sexual tension shared between Felicity and Ray.

Of course, Ray steps out of bed as Felicity snoozes away, puts the finishing touches on his A.T.O.M. suit, and we get our first look at Ray as DC hero, The Atom!… Mostly. Frankly, he has a lot more in common with Marvel’s Iron Man at this point, zooming around the city with rocket boosters, and even stupidly flying by the window where Felicity is sleeping. Smooth. It doesn’t seem like Ray’s size-changing abilities from DC lore have become a factor yet though. Maybe we’ll see those come to pass when Ray and Felicity pay a visit to Central City in the upcoming eighteenth episode of The Flash. 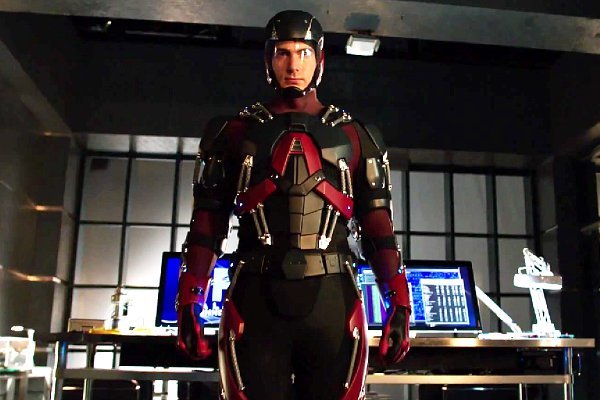 “Nanda Parbat” had a lot of big moments, and felt very dramatically satisfying overall. It’s a teasing note to put the series on hiatus with, since we’ve seen our first look at The Atom, and Oliver has truly been offered the job of a lifetime, but it should give fans plenty to ponder as they await the show’s return. After all, Arrow would certainly get mighty interesting if Oliver suddenly had an army of expert killers at his disposal!

Arrow 3.15: "Nanda Parbat" Review
Arrow delivered a lot of big moments in the episode before its three-week hiatus, between our first look at The Atom, Merlyn's capture, an offer to Oliver by Ra's Al Ghul, and Felicity finally embracing her feelings for Ray, all done to very satisfying effect.
THE GOOD STUFF
THE NOT-SO-GOOD STUFF
2015-02-28
86%Overall Score
Reader Rating: (1 Vote)
84%