After the first of two Parks and Recreation episodes this week felt clever and witty, the second felt like pure fan service for long-time fans of the series. That’s certainly great though, as “Save JJ’s” was another strong and highly satisfying episode, centering on a Pawnee institution that has contributed to a huge part of some of the series’ best jokes.

Even before that however, another superb callback bit was had with Tom and Donna, TREAT YO SELF 2017!! The reaction of Donna’s fiance to the whole Treat Yo Self ritual was priceless, and the bit only got better when Tom reveals that the two are going to Beverly Hills, their ultimate dream. It’s a fantastic idea for the show’s final season, and seeing Tom and Donna let loose with their off-the-wall materialism one last time was both heartwarming and a bit sad.

Still, so much fun was had with these two. Between elbow bedazzling, photo ops with Usher landmarks, and a very surprising cameo from Josh Groban eating his own sushi (the ultimate baller move!), this sequence was pure comedic bliss. It even concluded with a sweet moment, with Donna saying that the best way to cap off Treat Yo Self 2017, is for Tom to just man up and tell Lucy how he feels, particularly after Donna invites Lucy to her wedding as a wingman setup.

Lucy conveniently breaks up with her boyfriend in time for Tom’s big confession, go figure, and it begs the question as to why the show even bothered giving her a boyfriend if she was just going to dump him a couple of episodes later. It somewhat ruins Tom’s final quest for love, but hey, there’s still time for curveballs. Plus, as long as Tom is happy, the fans probably will be too. 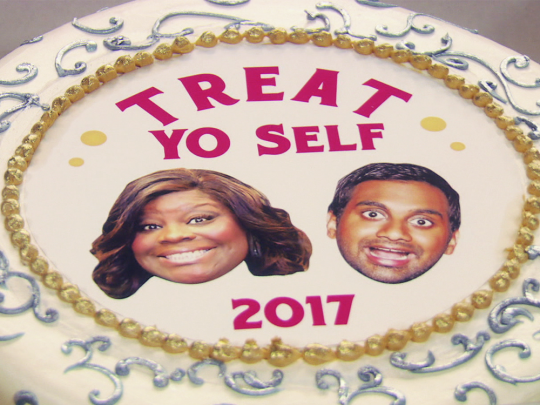 Back in Pawnee though, the plight of JJ’s brings the town to the doorstep of cologne magnate, Dennis Feinstein, who has bought up the land, and plans to demolish the diner. Seeing Andy sneak a team of child ninjas as his Johnny Karate persona was both very funny and cute (even if he didn’t get to execute his blimp plan), and it was a great ‘psych!’ moment when Dennis initially appears to capitulate to the town, only to psych them out and drive them off with FDA-banned wet dog cologne. According to Ben, water only makes it worse. Yikes!

All is not lost though. An idea from Andy and April leads to Leslie and Ron making a proposal with Gryzzl to instead buy up Pawnee’s ridiculously disgusting Beachview Terrace block (better known by Leslie as the Medical Waste Butt Sweat Grove), and instead donate the land that Leslie wants for some good PR, which they need after the events of the previous episode. This would allow JJ’s to thrive in a new location, and would prevent Gryzzl from completely cannibalizing Pawnee. This seemed to sweep the whole land conflict under the rug, but at least it was a happy ending. Better still was that Andy and his ninjas end up TP’ing Dennis’ office. That’s what you get when you use dirty cologne! 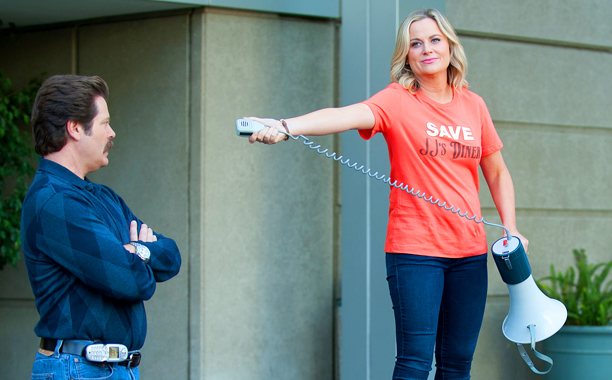 “Save JJ’s” was a great episode that was all about a love of the outstanding character that Pawnee has developed as a town over the past seven years. In a way, the town is a star of the show as much as the individual characters, and “Save JJ’s” really highlighted that to great effect. It’s a mystery as to what kinds of conflicts remain by the end of an episode that appeared to smooth everything over, but our time in Pawnee is not yet done regardless. Thus, it will be very interesting to see what other shenanigans the town can concoct before taking its final bow.