Arrow continued very strong with its increased emphasis on the supporting cast in “Midnight City.” With Oliver still having to try and recuperate under the care of Maseo and Tatsu, the situation with Brick in Starling City only gets worse. This episode also marks Laurel’s first proper turn in trying to succeed her late sister as Black Canary, and as one could expect, it’s a rough first run.

Naturally, Diggle and Roy aren’t pleased about Laurel trying to assist with fighting Brick’s cronies, since they rightfully believe that she’s only going to get herself killed. It’s actually appreciated that the show doesn’t try to make Laurel out to be this supreme badass on the first go, especially given that her sister had years of life-or-death struggle, and was trained by the League of Assassins. Laurel is very green, and while she did hold her own against Ted Grant, a former vigilante himself, that doesn’t necessarily translate to huge crime fighting skills. One has to wonder why she isn’t bringing her Canary Cry tools to fights though. You’d think that would help give her an edge, especially since she was shown using one at the end of “Left Behind” last week. 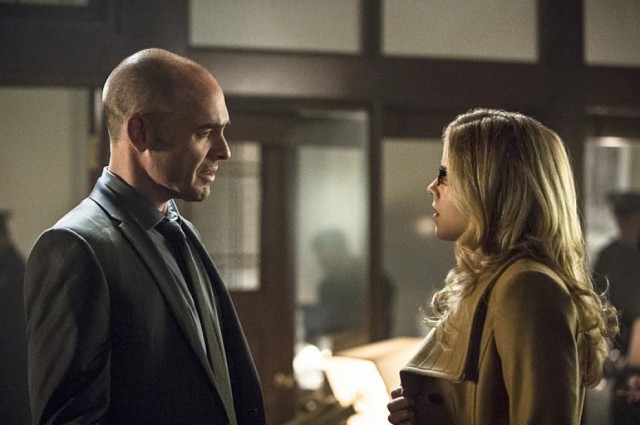 In any case, Felicity has continued to distance herself from her fractured team, and continues to urge Ray against further development of his A.T.O.M. exosuit. Just as Ray attempts to pitch his strategy to the mayor and Starling’s aldermen however, Brick attacks City Hall and takes the aldermen hostage, leaving Ray and Laurel shaken, and Ray re-evaluating his situation. Laurel is even forced to re-think her mask when one of the aldermen is killed right in front of her, after Roy hits Brick with an arrow, which predictably fails to stop him.

On the note of Brick, Vinnie Jones continues to make him a standout villain. Brick is very menacing, yet has a gritted charm about him. He’s another Green Arrow antagonist that the show has portrayed excellently, and another of Season Three’s best villains at this point, alongside Cupid, and of course, the veteran baddie, Malcolm Merlyn.

Speaking of Merlyn, his attempts to urge Thea out of the city end up for naught, with Thea balking at the idea of having to run when her father taught her never to run. Clearly, she underestimates her foe, but it was cool to see Merlyn just come clean to her about the situation, proving that amidst all of the lies, he does genuinely care about his daughter. This also proves that the good guys can still get through to Merlyn when the situation calls for it, since it’s Roy that impresses upon Merlyn that Thea will find out the real truth, and when she does, Merlyn will lose her forever.

The episode ends with a big twist on the note of Thea and Merlyn, with Thea’s DJ squeeze revealed to be a spy for the League of Assassins that is keeping tabs on Thea and Merlyn for some unknown reason. The DJ reports to Maseo that Merlyn is not fleeing Starling City, which prompts Maseo to prepare to rat him out to Ra’s Al Ghul. It will be interesting to see if Maseo actually delivers the report though, considering that he’s secretly betrayed Ra’s by reviving Oliver, and murders several League members to keep Oliver and Tatsu safe as well.

Oliver being away still leaves the others having to stop Brick on their own though, and Laurel narrowly escapes with her life after she has to suit up with Roy in order to save the aldermen, following the mayor capitulating to Brick’s demand to evacuate all police presence from The Glades. Felicity comes around enough to inspire both Laurel and Ray not to give up the fight, after Ray confesses that he cares more about protecting Felicity than the city at large, and it appears that she’s even ready to re-join the crusade, as a big battle with Brick looms on the horizon. She also finally helps Ray fix the exosuit, which may hopefully lead to a proper Atom debut sometime in the future, on this show, or another.

Even Laurel will no doubt be a part of it, despite continuing to have to lie to her father about Sara, even pretending to be Sara when news of the Black Canary inevitably reaches Captain Lance. Caity Lotz returns in voiceover via a voice changer that Laurel uses to pass herself off as Sara to her father, and one has to wonder just how hard Lance is going to keel over when he simultaneously learns that his one daughter is dead, and his remaining daughter has taken up her vigilante mantle with no training, and a lot of green anger. You really have to feel sorry for the guy. You also have to question his detective skills since becoming a captain though, since he can’t seem to discern the obviously different body shapes of Sara and Laurel, even in shadow. Seriously?

As for the flashbacks, they involved Maseo and Oliver presenting the Alpha bio-weapon component to China White in a nightclub. The two learn that the vial was switched with a fake vial by Amanda Waller, which Maseo wasn’t aware of, leaving them to escape with Tatsu, and barely get out with their lives. The flashbacks were alright, but they continue to just feel like filler at this point. As much as Oliver is the star of the show, it’s wonderful to see the supporting cast continue to be spotlighted so well in the present day.

“Midnight City” effectively built on the strengths of the midseason premiere, and I love that Arrow’s previously uneven third season has seen a huge jump in quality with this cool new direction. It’s temporary, as Oliver will no doubt be back soon, and Brick will inevitably be pushed aside for other threats, sadly, but the show is finally starting to hit the high points that most of Season Two enjoyed again. With the battle against Brick coming to a head next week, here’s hoping that the group continues to shine as Oliver makes his way back to be Starling’s main protector again!