Another key Flash Rogue made his debut on The Flash in “The Sound and the Fury”, that being Hartley Rathaway, a.k.a. Pied Piper. Piper’s debut was teased during last week’s midseason premiere, where his family was attacked by Captain Cold and Heat Wave, but this marks the first time that we see Rathaway in the flesh.

Now, as far as DC villains go, it’s tough to argue that Pied Piper is one of the sillier ones. You can even see on Carlos Valdes’ face when he has to try and make Cisco claim that, “Pied Piper” is not a bad villain name, that Valdes clearly doesn’t believe that. Pied Piper is a silly character. He’s a big part of the Flash mythos, he’s a very important staple of DC history, being the first openly gay super-villain in comics, but boy is he silly. Presented exactly as he is in DC Comics, he would be impossible to take seriously.

Fortunately, The Flash takes enough liberties with the character to make him a credible nemesis to Barry, without making him completely unrecognizable from his DC Comics counterpart. His tattered green cloak has been replaced with a more functional hooded shirt, and his hypnotic flute has been wisely omitted, at least for now, replaced with more credible metahuman sound manipulation abilities, albeit ones that he needs to tap into with the aid of a pair of specialized gloves. Guest star, Andy Mientus also does a great job portraying Rathaway, making him appropriately angry and sinister, even when he has to declare the ludicrous line, “It’s time to pay the Piper!” Yep, the show went for that low-hanging fruit.

The only issue with an otherwise solid villain in Pied Piper is the fact that he’s portrayed as a bit too much of a jerk here, especially to Cisco in flashback. The show wants us to feel sorry for Piper, being the former star protegee of Harrison Wells at S.T.A.R. Labs, before Wells had him fired and exiled from the scientific community, and that also makes sense when you consider that Piper has a clear redemption story in DC Comics. Even the way that the show made reference to his homosexuality, rendering it the reason why he was cut off and disowned by his wealthy parents, was well executed. Problem is, Piper was and is an asshole on The Flash, plain and simple. You can’t feel sorry for him, because during this first appearance, he’s just too nasty and arrogant, which makes his vendetta against Wells come off as more shallow than it should.

Where Piper faltered at times however, Wells stole the show. Wells was a big part of this week’s episode, where we finally actually see him use his own super-speed abilities after Piper comes knocking at Wells’ formerly unseen private residence, complete with red lightning, another reminder that Wells is in fact the ultimate villain to Barry, Reverse Flash! We also see that Wells gets his speed from technological means, with his abilities sometimes failing, potentially setting him up as Flash arch-nemesis, Zoom, or perhaps simply the man who ultimately creates Zoom in the present time. This episode also delivered the first mention and confirmation of the Speed Force in The CW’s DC Television Universe, which should open up all sorts of exciting developments to come for the show, especially when time travel inevitably becomes a bigger part of it. 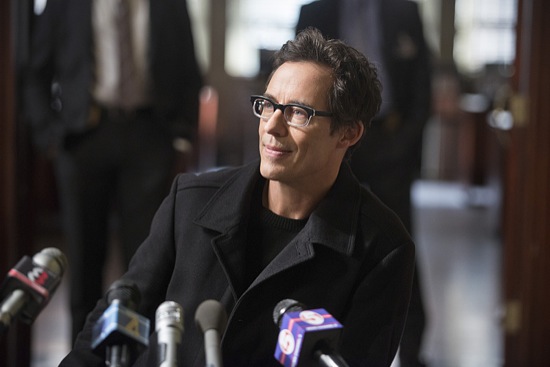 Anyway, Piper claims to know Wells’ secret, though this simply amounts to him revealing that Wells knew of the risk behind the S.T.A.R. Labs Particle Accelerator, and fired Piper simply because he didn’t want word getting out. There’s no question that Wells orchestrated the Particle Accelerator explosion on purpose for some unknown reason, and seeing his exile of his former protegee was another of the character’s darker moments, probably since his blatant murder of Simon Stagg in the second episode of the series. Wells outright states that his endgame is rapidly approaching though, and this should make the back half of the first season’s episodes especially exciting this year!

Detective West still doesn’t trust Wells either, even when he hosts a press conference to confess his crime of ignoring the Particle Accelerator danger to the entire city, complete with Wells declaring that he, “Failed the city”, as a cool nod to Oliver Queen’s catchphrase on Arrow. West and Eddie continue with their investigation of Wells, and again, this simply pumps up the intrigue even further as Wells’ final secrets are being revealed, with West so far being the only person who smells the devil in Barry’s midst.

Back to Piper though, the action centering around him was alright, but significantly more stilted compared to the awesome sequences incorporating Captain Cold and Heat Wave last week. This was even true of an otherwise neat intro action sequence, whereupon Barry apprehends some fleeing members of the Royal Flush Gang, another cool callback to Arrow. Regarding Piper, Wells’ clever trick of matching Piper’s frequency by hacking the satellite radio feeds of nearby cars so that Flash could ultimately defeat Piper was clever and cool, but one has to wonder why Barry keeps falling victim to people with tricked-out toys moreso than full-blown metahumans, though you could describe Piper as both, I suppose. Regardless, we know we’ll see Piper next week, after he reveals to Cisco that he knows where Ronnie Raymond is hiding. Of course he does. Given the not-so-subtle hint that Piper’s exploded gloves may have now built his sound manipulation abilities directly into his hands though, it’s clear that Piper will return to menace Barry and his team another day, no matter what happens with Ronnie.

The only other plot this episode aside from the business with Piper was Iris being hired by a Central City news station as a cub reporter, though not being allowed to cover anything else expect The Flash. Iris is naturally troubled, since she believes she’s severed ties with the Scarlet Speedster, and ironically laments this to Barry (go figure), but this subplot was firmly in the shadows. It’s also kind of amazing that Iris somehow missed the crime wave of Captain Cold and Heat Wave during the events of last week’s episode, and acted like she had no idea what he was up to, after the very public spectacle of Flash’s battle with the two Rogues. True, she was in the process of moving in with Eddie, but come on! Eddie didn’t even tell her all about how he saved The Flash from two deadly super-villains?! I find that hard to believe.

In any case, “The Sound and the Fury” had some missed opportunities with Pied Piper, but we know that this won’t be the last time we see the villain, plus the great material with Wells certainly picked up the slack. Another integral piece of the puzzle was revealed in Wells’ agenda this week, and regardless of what happens with Barry and his metahuman battles, it’s fantastic to know that something far worse and far more satisfying continues to brew in the shadows, right under Barry’s nose.

The Flash 1.11: "The Sound and the Fury" Review
The Flash effectively approached its endgame with Wells this week, and made for a surprisingly credible, albeit mixed debut for Flash villain, Pied Piper.
THE GOOD STUFF
THE NOT-SO-GOOD STUFF
2015-01-28
85%Overall Score
Reader Rating: (1 Vote)
86%