Agent Carter returned after taking last week off (a bit unusual for a special event miniseries, but whatever), with “The Blitzkrieg Button”, an episode that returned Howard Stark to proceedings. This meant more time with Howard and less time with Jarvis, which is fine, though if I’m being honest, “The Blitzkrieg Button” slipped a bit in quality compared to the prior three episodes, though not by too much.

Howard is a fun character, though his downright comical womanizing made for a slightly distracting episode opening. It made the show go from feeling sophisticated to sometimes feeling a bit too goofy, though thankfully, there wasn’t too much of this. Besides, the more dramatic material between Peggy and Howard helped to return the grounded tone to the show shortly afterward. At least Peggy got one effective jab in towards the beginning however, when she’s forced to try and smuggle Howard into her all-female living quarters, and when Howard expresses worry about going into a dumbwaiter, Peggy dryly retorts not to worry, since she’d never tell anyone that the body of Howard Stark is rotting underneath her building.

The main plot of the episode involved Howard having to come out of hiding, since the weapons that were seized by the SSR happen to contain a dangerous weapon that is at high risk of being accidentally activated. The weapon was meant to cause a city-wide blackout in order to disorient Nazi bombers, though this comes from destroying electrical grids on a city-wide scale, which is why Howard kept the weapon to himself. He is forced to ask Peggy to try and sneak into the SSR at night and retrieve it.

Oh, but it turns out that Howard is lying, which Jarvis even blatantly points out with a hilariously bad tell where he pulls his ear every time he lies. You don’t have to be an SSR agent to spot that, and Peggy is right to tell Jarvis that he’d better never start playing poker! In any case, the mysterious object is not in fact a weapon, but a containment vessel containing the last sample of Captain America’s blood. Oh dear. Howard certainly earned that punch in the face from Peggy when he makes this revelation, especially given the emotional significance that Captain America’s character also holds with Peggy.

This macguffin was a good one, since it helped bring Agent Carter a little more into the Marvel Cinematic Universe with the gentle reminder that Captain America lies frozen for S.H.I.E.L.D. to recover decades later during the events of this miniseries. Yes, we know that Leviathan and probably HYDRA are somewhere in the background, but for the most part, Agent Carter has been incredibly character-focused, even if it’s largely been to the miniseries’ benefit to avoid constant nods to larger-than-life Marvel personalities like Captain America, Red Skull and Asgard, among other things that had entered the world by the MCU’s 1940’s. 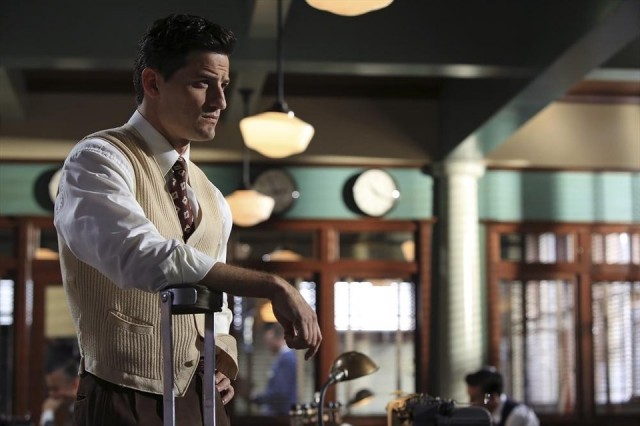 While Peggy seeks out Howard’s dirty little treasure, Agent Thompson is placed in temporary command of the SSR office, while Chief Dooley goes to interrogate a Nazi war criminal after the death of one of his agents from the previous episode. The interrogation with Dooley was very nicely intense, as the Nazi is about to hang, and Dooley promises him a quick death that he would appear to have no intention of granting. Likewise, the drama with Thompson was also effective, particularly a scene where he drunkenly tells Peggy that the natural order of the universe dictates that women can never stand with men in the field, and so, Peggy shouldn’t try.

It was Sousa who took the most of Thompson’s berating though. Sousa arrests a local vagrant that he believes to be a witness, but fails to get information out of him. Thompson bribes the man with a burger and liquor, and the SSR gets a bit closer to learning who is assisting Howard with his stolen weapons. It’s a gratifying character moment for both Thompson and Sousa, because it shows that Sousa is not a perfect do-gooder, nor is Thompson a complete jerk. The SSR truly is comprised of good agents beyond Peggy, even if Peggy is the only one not limited by her time.

The big moment this episode came towards the end however, when a steely albino asssassin comes to kill Peggy in her building, only to be stopped and killed pathetically easily by one of Peggy’s living mates, Dottie, who clearly has some badass fighting technique. Could Dottie be an agent of Leviathan spying on Peggy? It sure looks that way, especially since her technique seems more than a little reminiscent of Black Widow’s in the MCU’s present era. Does this mean that Dottie was trained by the same people who trained Black Widow? Suggesting that Black Widow may have been recruited by Leviathan and subsequently escaped would be a cool twist for the modern MCU that further helps Agent Carter blend in with it, especially when Black Widow’s past still remains largely shrouded in secrecy between her appearances in various Marvel Studios movies. It would also explain why someone apparently as violent and dark as Black Widow could ever work for S.H.I.E.L.D.

Another possible theory is that Dottie may actually be Yelena Belova, or at least an ancestor of Yelena, the second Black Widow of Marvel Comics lore. It would be odd to have Marvel Studios limit their second Black Widow to the MCU’s 1940’s, but then again, the actual Jarvis only exists in this time period, so who knows. In any case, time will tell.

On one last note, this episode, the halfway point of Agent Carter’s eight-episode timetable, also featured a Stan Lee cameo, having Lee appear as an old man getting his shoes shined alongside Howard Stark, and asking him for the sports section. It was a great cameo that was one of the better and more memorable cameos in Marvel Studios history, and for Marvel fans, seeing these cameos is always a pleasure, so it’s great when the TV shows slip them in as heartily as the movies do.

“The Blitzkrieg Button” didn’t quite hum with the same consistency that the other strong Agent Carter episodes have managed, but it was still a great entry in this miniseries overall. There were plenty of fantastic character moments, and while the episode sometimes got a bit too over-the-top in a show that’s trying to be more grounded for Marvel standards, it still presented a strong amount of drama and mystery to keep looking forward to next week.

Agent Carter Episode 4: "The Blitzkrieg Button" Review
Agent Carter faltered a bit with some increased silliness this week, but continued to deliver standout drama and mystery, along with some welcome added connections to the main Marvel Cinematic Universe.
THE GOOD STUFF
THE NOT-SO-GOOD STUFF
2015-01-28
81%Overall Score
Reader Rating: (1 Vote)
81%