NOTE: Full spoilers for this episode of Constantine are present in this review

Constantine has generally been a pretty strong show since its debut. The show has gained particular momentum since its return in 2015, even with just five episodes to work with before the first season is up. It’s a shame then that “A Whole World Out There” feels like the show’s first real misfire. It’s far too disconnected from what came before, and it barely has anything in common with the sensibilities of DC’s Hellblazer comics.

There was one interesting, albeit somewhat random nod to the wider DC Universe this week however, with the latest paranormal kerfuffle taking place at Ivy University, the academic institution of Ivy Town, the stomping grounds of size-changing DC superhero, The Atom, the civilian identity of whom is ironically being featured on The CW’s Arrow at present. Apparently, a group of students decide to try out inter-dimensional projection, and somehow end up in a pocket dimension created by a runaway murderer who wants to hunt and kill victims for all eternity.

It sort of sounds like an interesting concept… But one for another show. Adding insult to injury was the fact that Chas and Zed were completely absent from this week’s episode, with flimsy excuses explaining their leave, especially after the events of “Quid Pro Quo” last week. That made this episode feel even less like it belongs in the Constantine canon, even if Matt Ryan’s presence still makes for a satisfactory amount of high points, and a return by Ritchie from the pilot is also had this week.

After Manny tells Constantine to check his map, putting him back in Ritchie’s backyard, the mysterious man begins to start trapping the four students that contacted his dimension, and then killing them one-by-one, so they’re permanently stuck there, and he can keep hunting and killing them forever. Wait, what?

Constantine, and even its source comics, have a habit of constantly making up new rules with magic and the paranormal, and then contributing a macguffin from Constantine’s hidden arsenal to fix everything when the situation calls for it. The idea that the villain could somehow trap the students in his world if he killed them, and then keep killing them forever, felt incredibly contrived and non-sensical though. Even the idea that an ordinary man, who somehow had extreme inter-dimensional knowledge that there’s no way he could have attained through natural means, could create this universe and then freely manipulate reality and keep trapping people in a loop of death, felt like it made no sense. Besides, if his influence in this reality is infinite, there’s no sport in that hunt, so what’s the point if he’s omnipotent? Moreover, can’t he just create hunting pawns? Why does he need to let students go, and then trap them again using ancient Egyptian mirror magic? No, really. That’s the explanation that the show provides!

Given that the rules with this pocket dimension are loose and barely existent, Constantine and Ritchie follow the sole remaining student into the dimension later, after she becomes trapped by her phone’s surface in Constantine’s lair (oh come on, that shouldn’t have worked, given Constantine’s protection spells!), and manage to find each other. After that, Ritchie has to use his own knowledge of extra-dimensional science to overtake the reality and phase the bad guy out of existence. Yep, it was that easy. So much for that threat.

The episode almost has Ritchie staying behind in the pocket dimension, vowing to create a better, more beautiful world with it, before Constantine chastises him for simply trying to run away from the looming threat of the Rising Darkness. Oh yeah, that was another big, pressing matter that this episode appeared to sweep entirely under the rug. It initially looks as if Ritchie might actually stay, but the show unfortunately wimps out, and has him return. That felt like a particular let-down, considering the fact that the show has not been afraid to kill off Constantine’s friends before, and really show the danger that comes with associating with Constantine. 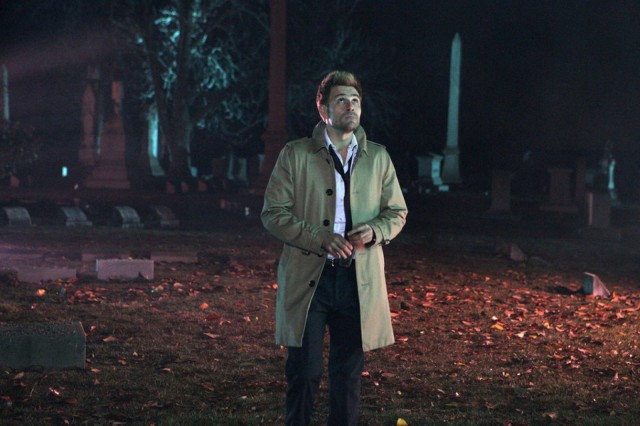 “A Whole World Out There” felt like an awkward sidestep as the show begins to ramp up for the season finale, which is hopefully not a series finale. It’s a very disappointing stumble after the high momentum that Constantine has enjoyed lately, but hopefully, it will be business as usual next week, as the climax of the battle against the Rising Darkness approaches.