The Flash appeared to deliver an early Valentine’s Day-themed episode this week, albeit subtly, as Barry and Caitlin decided to seek new loves, and move on from Iris and Ronnie respectively. Caitlin strikes out, rather unbelievably, but Barry ends up meeting Linda Park, best known in DC lore as the future wife of Barry’s successor to the Flash mantle, Wally West.

Beyond that though, this episode of The Flash was especially strong, and probably the best of 2015 so far. It had a great mix of character drama and humour, and even featured a very entertaining, memorable metahuman-of-the-week! It also had a drunken Caitlin Snow, whose rampant jokes write themselves. Hopefully, we see more of that side of her character eventually! 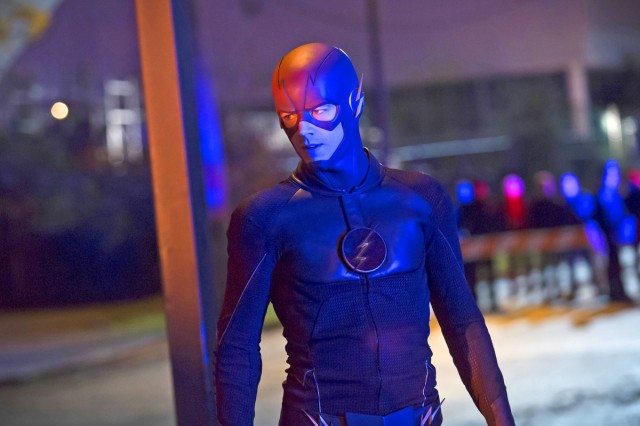 Despite this being her introduction to The Flash however, we barely see any of Linda. She just pops up as a cool girl that Barry meets in a bar after a rather disastrous karaoke stint to Grease with Caitlin, and it turns out that Linda also works at the same reporting office that Iris was recently hired at. Go figure. Iris is shocked to see Barry dating someone else, and is visibly bothered by it, though not much comes out of it this week, rather predictably.

While Barry, Caitlin and Iris are all sorting out their love lives however, another metahuman menace, Shawna Baez, known in DC lore as minor Flash baddie, Peek-a-Boo, decides to break her criminal boyfriend, Clay Parker out of Iron Heights Prison. Given that Shawna can teleport anywhere that she can see, she proves very difficult to catch, even for The Flash, and also makes for a clean getaway by Clay, who is ready to sort out his debt with one of Central City’s key crime bosses.

The altercations between Flash and Peek-a-Boo are very creative and fun to watch, and it’s great to see a weekly threat that has some real depth to her again. Strangely, it seems to be the female metahumans that resonate the most on this show, since our last truly effective metahuman-of-the-week was Plastique, back in the show’s fifth episode last year. Peek-a-Boo is more of an actual villain than the tragic Plastique was, but even she feels like a more memorable baddie, since she’s clearly under the thumb of a boyfriend that is happy to use her.

The only drawback to the whole Peek-a-Boo element is the final minutes of it. After Barry creatively exploits Shawna’s inability to teleport in the dark, by blacking out a tunnel, he races to the getaway car, only to find that Clay ran off… somewhere, and abandoned her. This seems like a fitting, albeit dismal end to her character’s crimes, especially since she was clearly doing them in service of someone that was never true to her, but the fact that Clay could so easily get away from The Flash of all people felt contrived at best. Yes, it’s dark, but surely Barry could explore the whole tunnel long before Clay could get anywhere!

Fortunately, there were still some inspired moments at Iron Heights and with Cisco to make up for this. After Barry’s father ends up getting stabbed in prison for providing intel to Joe, Barry visits him, and Henry makes it subtly known that he’s pieced together his son’s secret identity. This makes for a very uplifting speech from Henry, and for DC fans, it even functions as a very heartwarming passing-of-the-torch from John Wesley Shipp, the 1990 TV Flash, to Grant Gustin, the new TV Flash. It’s one of the best moments that the show has had yet overall, especially considering how Barry mischievously deals with his father’s attacker by making it look like the guy was escaping the prison, adding ten years to his sentence. Creative, cold, and probably the perfect punishment from the Scarlet Speedster. 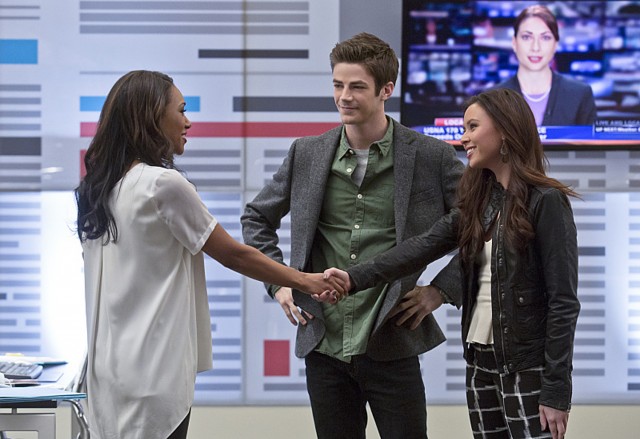 Another very strong plot element came into play via Cisco, who agrees to the offer of Hartley Rathaway/Pied Piper from last week. After letting Piper out of prison, Cisco learns of what truly happened with Ronnie, and why Dr. Stein never left S.T.A.R. Labs after the Particle Accelerator explosion. This is the show’s first confirmation of Ronnie and Stein being merged into a single being, as with DC lore. Cisco initially gets the upper hand when Piper inevitably betrays him and tries to escape, leading to Cisco stopping him with a sound-amplifying gizmo, and taunting that Piper isn’t the only one who knows vibrations (a cool tease of Cisco’s future identity as sound-based DC superhero, Vibe). The second time however, Piper does get away, leaving Cisco to face his friends at S.T.A.R. Labs.

The true danger of Piper getting loose again is swept under the rug, a bit disappointingly, even if he is a core Flash villain that is bound to end up at large to mess with The Flash another day, just like Captain Cold, Heat Wave and Golden Glider from the midseason premiere. Despite that, Cisco’s confession of having to seal Ronnie in the Particle Accelerator chamber to Caitlin was a very dramatic moment. Equally dramatic, yet satisfying was Caitlin admitting aloud that Cisco did the right thing, and saved many lives. All things considered, Cisco may have gotten off easy for letting Piper break out of the metahuman prison, but it was great to see that the show isn’t forcibly driving its core characters apart for its own sake, since the threat of forces like Reverse Flash/Dr. Wells means that our heroes need each other more than ever!

“Crazy For You” was a fantastic episode of The Flash that was great fun to watch, and had some real standout character moments all around. With the Firestorm plot kicking into high gear, and a new romance blooming for Barry, the show will have no shortage of stories to work with as we enter the season’s back half, and can start looking forward to the return of Reverse Flash, time travel, and many more exciting things to come!

Oh, and that awesome tease of Gorilla Grodd’s increasing intelligence and violence in the Central City sewers at the very end of the episode was icing on the cake!

The Flash 1.12: "Crazy For You" Review
The Flash delivered an all around excellent episode with "Crazy For You", featuring a great metahuman-of-the-week, superb character moments amongst the leads, and a great ending tease for Grodd.
THE GOOD STUFF
THE NOT-SO-GOOD STUFF
2015-02-04
93%Overall Score
Reader Rating: (1 Vote)
94%