NOTE: Full spoilers for this episode of Parks and Recreation are present in this review

Parks and Recreation opted out of airing two simultaneous episodes this week, instead simply showing “Donna and Joe” in the 8:00 P.M. EST timeslot. This showcased the wedding of its title characters unfolding, as well as representing a huge new move for Ben in terms of his career.

These two simultaneous opportunities had more fan-favourite characters come back for guest roles, which was awesome! Jennifer Barkley in particular returned to give Ben a proposal to run for Congress, and continued to be her appealing mix of nasty and professional. Her reaction to Leslie and Ben’s children was also priceless, being simultaneously confused and grossed out by them.

Speaking of Leslie and Ben’s children, we finally got a solid look at their home lives with the triplets this episode, and it’s about time! Amy Poehler’s fellow SNL vet, Rachel Dratch even guested as an all-new character, Leslie and Ben’s neurotic nanny, Roz, and the fact that Leslie genuinely tells Roz that she could live with the loss of Ben, but not the loss of her, was hilarious stuff. Equally hilarious was Roz’s out-of-context reactions to things that the children were apparently doing off-screen, such as the kids tripping and apparently breaking everything that the two own, or suddenly announcing that all of Ben’s ties were in the toilet.

It’s actually kind of refreshing to see that Leslie and Ben’s kids have a bit of a mischievous side. It makes sense, given their restless parents, and seems to especially suggest that they take after the boundless energy of their mother as well. I sort of doubt that the triplets will play much more into the show’s final season, but that’s fine, as one glimpse into Leslie and Ben’s home life feels like enough.

As for Jennifer’s proposal however, she thinks that Ben would be the perfect person to run for congress. She even pitches exactly why it’s a good idea, with Leslie following up with the equally good idea of saying that Ben should act like he’s going to run at the wedding, then act like he’s not going to run the next day, and see which he likes better. 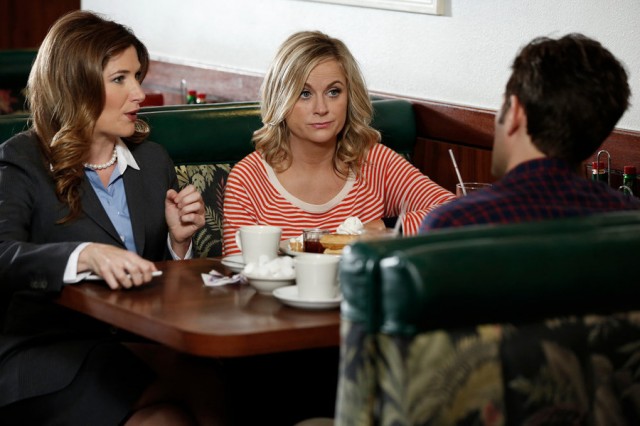 Of course, what the two don’t anticipate is that they end up getting pretty drunk at the wedding, with Ben leaving multiple voicemails to Jennifer about how much he wants to run, leading to Jennifer going ahead with the campaign ads, and Ben being unable to back out. This was fine though, as Ben never would have taken the reigns himself, so fate intervening is another good way to get the wheels turning with what’s inevitably going to be a big exit from Pawnee for Ben and Leslie. Oh, and one of the episode’s funniest jokes followed up from this as well, with Leslie realizing that she called the 867-3609 number a hundred times. Oh, if only we knew what she had said.

The wedding was front and center with every other character though, with the title characters of this episode ironically shoved into the background for the most part. Even Donna’s family seemed to take comedic precedence over her, and like the brief glimpse of what Ben and Leslie’s triplets are like, it worked surprisingly well with the brevity of Donna’s actual appearance. The other Meagle family members already seemed to have their own hilarious lore, with national divides, a lengthy list of instructions about how the two must interact, and some really spectacular feuds over things like a Dig Dug arcade session. The episode even closes out with the brother that Donna didn’t want coming showing up, with the only reason for the estrangement being yet another feud, wherein the brother takes an exact microwave from years before, smashes it on the ground, and then declares that no one gets popcorn. It’s that kind of hysterical, quirky craziness that is really going to make me miss Parks and Recreation after it wraps.

Even seeing April take charge and successfully keep the Meagle family in line was a moment as brilliant as it was hilarious. When April started the show, she wouldn’t have taken her job seriously at all, but seeing her actually succeed at barking out orders, even to people as strong-willed as the Meagle’s, was a great sign of how far she has come as a character since seven years ago. It was also great to see the show take a break from her plodding existential crisis too, which made her character arc more memorable and funny this episode.

Lastly, Ron accidentally blurts out to Lucy that Tom would like to marry her someday, not understanding what he did wrong, even as Tom tries to deflect his want for appetizers. This arc was pretty overshadowed by the rest, but it nonetheless continued to set up a happy ending for Tom, with Lucy being pretty cool with everything. Might Tom get married next? I wouldn’t mind another time jump, or at least a swag-filled, Tom-approved City Hall wedding. Everyone else has found true love after all. Tom can’t be the only one ending the show without a definite mate.

“Donna and Joe” may not have focused on its title characters, but it still delivered an onslaught of great laughs, and a welcome new storyline to keep carrying the final season, as well as setting up for the series finale. Even with a diminished presence, this episode presented exactly the kind of wedding that Donna deserves; Loud, ridiculous and full of unapologetic craziness.

Parks and Recreation 7.7: "Donna and Joe" Review
You may not see much of the title characters, but Donna and Joe's wedding was nonetheless filled with outstanding hijinx, and put Ben on the path of a well-earned career boost.
THE GOOD STUFF
THE NOT-SO-GOOD STUFF
2015-02-04
90%Overall Score
Reader Rating: (1 Vote)
89%