Better Call Saul has effectively proven that it can already balance incredible highs and lows with its emotion, and it proved that better than ever with “Alpine Shepherd Boy”. The first half of the episode is ridiculous and cheeky, while the second half lays out the underlying tragedy beneath all of the wackiness that we were chuckling at just moments before.

It’s this kind of awesome thematic juxtaposition that makes Better Call Saul easily rival Breaking Bad when it comes to overall entertainment value. Even as we saw an amusing scene of Jimmy’s brother racing outside in a foil blanket to grab a paper last week, we now see the actual toll that Chuck’s ‘condition’, which is seemingly psychosomatic, as revealed this episode, really takes on both him and Jimmy. We also see Jimmy having to make a difficult choice, potentially for the wrong reasons.

Before all that however, we get to settle into some nice awkward client talk, after the stunt Jimmy pulled on the billboard during last week’s episode. With his false heroism now broadcast for all to see, Jimmy’s office is being bombarded with clients, though they’re no doubt not the clients he was hoping for. An old lady asks Jimmy to help her divide her figurine collection (which is where the episode’s title is derived from), a right-wing nut job tries to twist Jimmy’s arm into helping him secede from America with his property as an independent state, and, best of all, Jimmy is asked to protect the design of an oddly sexual talking toilet. Yes, really. Something tells me that the conclusion of that toilet scene is going to be one of the most adored and frequently referenced moments in this entire series too!

As Jimmy is forced to embrace these less-than-ideal clients, Chuck has the police called on him by the neighbour he stole the paper from, and must try to keep them at bay, due to his condition. When the cops discover what Chuck has done to his electrical grid, they force their way in, and Chuck is overloaded, ending up in the ER. This forces Jimmy to visit him, along with Kim, whose relationship with Jimmy is becoming more of a point of interest with every episode, even if it seems to involve an awful lot of foot treatments. 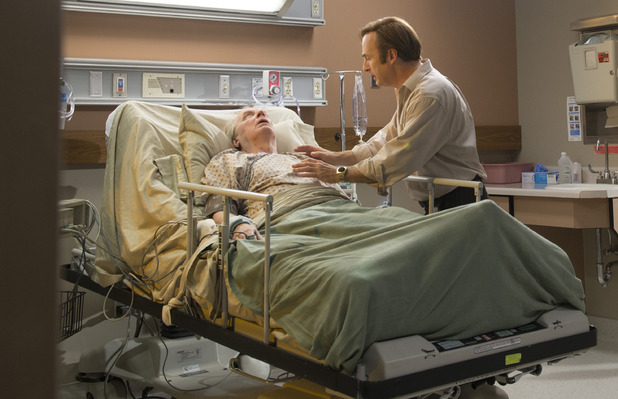 It’s here that the episode ditches the silliness, and shifts to painstaking drama without missing a beat. Jimmy must plead with security and the doctor about Chuck’s condition, only to have the doctor switch on the electricity of Chuck’s bed without Chuck’s knowledge, proving that his condition is psychosomatic. Jimmy is then faced with the possibility of having to commit Chuck, which he’s initially against. After Hamlin shows up to try and profit from the situation however, Jimmy then decides to commit his brother.

Is it spite, or selfishness? You’re not actually sure on either side, but that just makes the personalities at play all the more intriguing to watch. If Chuck is indeed about to be committed, it will be interesting to see any potential shifts in the show’s dynamic from here. Will being free of having to care for his brother make Jimmy better, or worse? I’m inclined to lean towards the latter, but we do have quite a few years before the events of Breaking Bad unfold.

As the episode winds down, Jimmy once again meets up with Mike, and lo and behold, he finally has the proper amount of stickers this time! Mike is then followed home by the episode, where it ends with him having to answer the door to some cops, and saying that they’re a long way from home. Is Mike’s past as a cop finally going to be delved into, after it was teased in Breaking Bad? It sure looks that way.

“Alpine Shepherd Boy” continues to have Better Call Saul on the rise as one of the best new comedies and dramas of this 2015 TV midseason lineup. With some big changes in dynamic for Jimmy, and the war against Hamlin continuing, we’ll see if Jimmy’s new throwback clients can be the decisive step on putting Jimmy onto the path of fortune, or ruin.