After a pretty weak episode with “Captain Peralta” last week, Brooklyn Nine-Nine made a return to form with “Sabotage”, a more creative and satisfying episode with better jokes, and a more interesting resolution.

The main plot of the episode involves Peralta getting suspended because traces of meth and cocaine were found in his drug test sample. Being Peralta, he ignores his suspension by Holt to try and investigate, while Santiago and Diaz try to get to the bottom of the case themselves. Initially, it’s Boyle that gets put on the case, but after a pretty gruesome threat, Holt immediately takes him off of it, saying that Boyle is too close to this, which is incredibly funny. 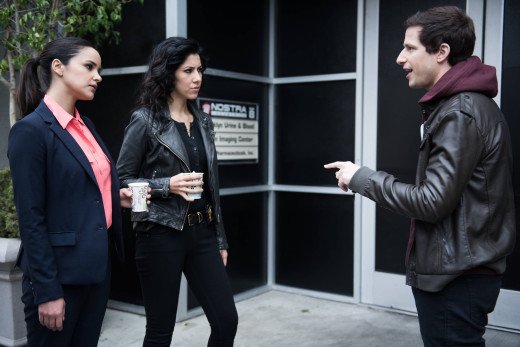 Peralta’s increasingly ludicrous lengths to prove he was sabotaged by some unknown person were pretty amusing as well. As Santiago and Diaz try to remain neutral and professional, Peralta tries to pass off attending the urine lab as a tourist attraction (turning down Santiago’s suggestion of an office ware exhibit, go figure), and even stows away in the back of their car. How could Diaz possibly be surprised by a man jumping out suddenly and yelling loudly in her vehicle? Truly a mystery, Peralta…

The resolution to this plot was hilarious as well. It turns out, Peralta was indeed being sabotaged, by none other than his ex, Sophia’s former boss, Geoffrey Hoytsman, whom he busted for cocaine use and possession during “The Defense Rests.” This was a very funny callback to that episode, with Chris Parnell again getting lots of laughs as he recounts how he’s had to live in an ice cream truck, among other dirty deeds. The reveal that Peralta got him off with forty hours of community service from the judge, which Hoytsman wanted to get through all at once by doing a bunch of drugs, getting him in even bigger trouble, was a highlight laugh this week too!

Nonetheless, Peralta is blamed for Hoytsman’s dire straits, with Santiago and Diaz ultimately rescuing him, and arresting Hoytsman, before Peralta can be killed and framed for forging the evidence against Hoytsman. It was nice to see both Peralta’s intuition and Santiago and Diaz’s old-fashioned detective work equally turn out to win the day, not making either party out to be malicious or idiotic. One couldn’t ask for a more effective resolution than this one.

As for the subplots, there were two this week. After being taken off of Peralta’s case, Boyle is put with Scully and Hitchcock, and is naturally frustrated at their perpetual incompetence. This plot’s resolution is also very clever. The two end up arresting a perp that eludes Boyle, with Boyle being impressed at their surprisingly good work ethic and attention to detail, putting aside the fact that the two break a window to make a point.

It turns out, Scully and Hitchcock have always been good detectives. They’re just incredibly lazy, and in their advanced age, they simply don’t want to work hard like they did in the 70’s and 80’s. It’s a brilliant way to re-interpret both characters, and makes re-watching episodes more rewarding, since it helps to explain how Scully and Hitchcock go to such ridiculous lengths to appear as the biggest idiots in the precinct. Suggesting that it’s all an act, and they just know the right ways to make everyone dismiss them, almost makes them two of the smartest people in the entire show. Very funny stuff!

The other subplot involved Jeffords having to lie to Gina about seeing her latest dance recital. Holt fesses up that neither he nor Jeffords went, believing that he can’t lie to people, and Gina decides to give up dancing. She’s pulled a routine like this before, which diminished some of the impact of this subplot, but even if this was the weakest plot of the three, it still had some good laughs. Jeffords trying to explain why he tells white lies was particularly funny, relating about how his attempts to get his daughters to eat vegetables landed him with two rabbits and general confusion. 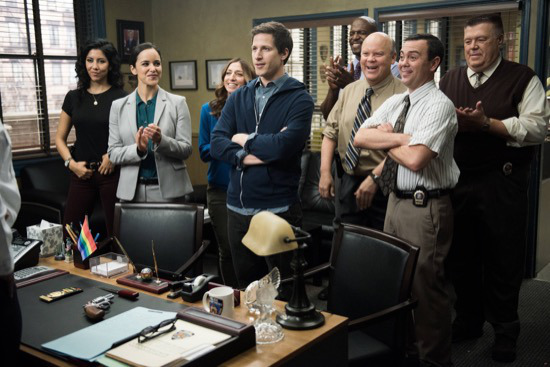 It was good to see Brooklyn Nine-Nine get back on the ball this week, particularly since it looks like the show is entering its Spring hiatus now. “Sabotage” had good plots for every character, another great guest role from Chris Parnell, and plenty of good chuckles. It goes to show that this series is at its best when it remembers first and foremost to have fun, and just do its thing.

Brooklyn Nine-Nine 2.19: "Sabotage" Review
Brooklyn Nine-Nine returned to form this week, with Peralta's past returning to haunt him in a far more satisfying way, and every character getting a great chance to shine in an episode that was packed with good laughs.
THE GOOD STUFF
THE NOT-SO-GOOD STUFF
2015-03-16
88%Overall Score
Reader Rating: (0 Votes)
0%