With March coming to an end tomorrow, Sony has finally revealed the free PlayStation Plus games that their premium members will be able to redeem this April! As usual, six free games will be on offer, despite Microsoft offering double the amount of freebies with their competing Games with Gold selection on Xbox platforms during April. Even so, Sony will be switching gears a tad. 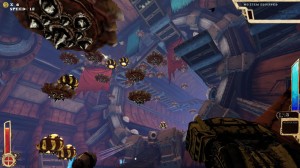 Normally, each of Sony’s three current platforms gets two free PlayStation Plus games each month, with some being cross-buy in certain instances. In this case however, the PlayStation 4 is getting three free rewards, while the PlayStation 3 is only getting one freebie to itself. Don’t despair if you’re still rocking Sony’s last-gen console however. Two of the free PlayStation 4 rewards for April are cross-buy, and will also net you a PlayStation 3 version when you redeem them, so you get the same amount of free games with either console.

As usual, you must have and maintain an active PlayStation Plus membership to both redeem and play any free game rewards at any time, on any platform. April’s free rewards are also set to go live next Tuesday, April 7th. At this time, March’s free game selection will return to their original prices for PlayStation Plus members. Thus, if you have yet to redeem OddWorld: New ‘n’ Tasty!, Valiant Hearts: The Great War, Papo & Yo, Sherlock Holmes: Crimes & Punishments, OlliOlli 2: Welcome to OlliWood, or CounterSpy, you have one more week to do so, before they’ll cease to be free. 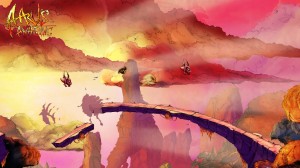 Anyway, with that out of the way, let’s break down what PlayStation Plus members can score for free in April:

The first of three PlayStation 4 rewards will be Tower of Guns, an all-new game releasing for the first time on PlayStation platforms on April 7th, after launching on March 4th of last year for PC, Mac and Linux. Developed by Terrible Posture Games, a Boston-based indie outfit founded by a single game artist, Tower of Guns unfolds as a roguelike first-person shooter with randomly generated levels and enemies. It was well-received in its initial PC, Mac and Linux builds, for being action-packed, and an innovative new spin on roguelike games. Tower of Guns is cross-buy between PlayStation 4 and PlayStation 3, and is also planned for release on Xbox One. 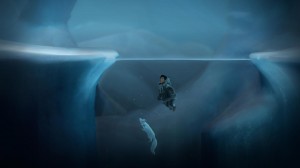 The second of three PlayStation 4 rewards is Aaru’s Awakening, a game that began as a student project in Iceland. Developed by Lumenox, Aaru’s Awakening is a fast-paced 2D platformer, with players having to navigate treacherous terrain by combining the ability to teleport and charge. The game was initially released for PC, Mac and Linux on February 23rd of this year, where it received positive feedback for its engaging challenge and high-quality artwork. This is another game that will be cross-buy between PlayStation 4 and PlayStation 3, and will launch for the first time on PlayStation platforms on April 7th.

The third PlayStation 4 reward, and the lone reward that Sony’s next-gen console will have to itself, is Never Alone. A game developed by Upper One Games, a studio founded entirely by Northern Indigenous developers in Alaska, Never Alone tells the story of a young Inupiaq girl named Nuna, who must try and find her way home with the help of a kindly fox spirit. The game is a co-operative 2D puzzle-platformer, which can be played solo, or locally with a second person. We reviewed Never Alone just recently as well, scoring it a 70%, and praising its value as an education tool and storytelling innovation, even if we took issue with its occasionally clunky gameplay and bevy of glitches. Never Alone is also available for PC and Xbox One, and is planned to release for Wii U at some point this year. 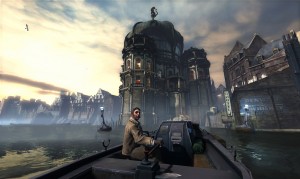 The lone PlayStation 3-specific reward for PlayStation Plus members in April will be Dishonored, though some may already be aware of that, as this freebie was accidentally leaked early by Sony during March. Dishonored takes place in the steampunk city of Dunwall, with players assuming the role of Corvo Attano, a bodyguard framed for the murder of his empress. Making contact with a resistance and vowing revenge, players can customize Corvo’s abilities to rely on weapons or sorcery, and can opt to either violently murder their way through the true conspirators, or stealthily undo their operation without taking a single life, or perhaps something in between. Dishonored has received enormous critical and community acclaim since it launched in 2012, with its superbly open-ended gameplay and refined stealth mechanics being especially celebrated. Dishonored is also available for PC and Xbox 360.

As for PlayStation Vita owners, their first reward for the month will be the Vita-exclusive first-person shooter, Killzone: Mercenary. An interquel taking place between the events of Killzone 2 and Killzone 3, Killzone: Mercenary unfolds across both the human settlement of Vekta, and the harsh planet of Helghan. Players take control of Arran Danner, a hired gun who battles against both the human ISA forces and the mutant Helghast Empire. We reviewed Killzone: Mercenary during its launch in 2013, praising the fact that it finally realized a genuine first-person shooter on Sony’s handheld, even if we also lamented its extreme brevity.

The second free PlayStation Vita reward for April will be MonsterBag, yet another all-new game releasing for the first time on April 7th. Developed by Chile-based studio, IguanaBee, this cheeky, colourful puzzle game will place players in the role of V, a kindly monster that just wants to get back to his human friend, Nia. He’ll need to sneak around prying eyes however, as the general population scares quite easily when they see monsters! For those starved for them, you may also be happy to know that MonsterBag is a PlayStation Vita exclusive as well!

This month looks like it’s once again skewing toward the realm of indies pretty heavily, after March threw in some more retail offerings. Dishonored and Killzone: Mercenary are the lone retail selections, though getting three all-new indie releases for free is certainly not a bad deal! The one that’s already available, Never Alone is more of a mixed bag, but given that we praised its use as an educational tool, scoring it for free as a PlayStation Plus member is a pretty solid deal, if you’re interested in learning about other cultures.