We won’t be seeing the third season go live until June, but Netflix has already ordered a fourth season of their highly popular dramedy series, Orange is the New Black. 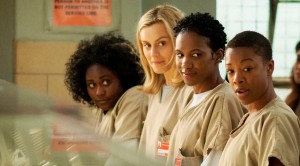 Naturally, Season Four will appear in full on Netflix in 2016, likely in June, as with previous seasons. It’s presumed that the series’ lead actresses, namely Taylor Schilling, Natasha Lyonne, Kate Mulgrew, Laura Prepon, Taryn Manning, Yael Stone, Dascha Polanco, and Uzo Aduba, among others, will all return for the fourth season. The status of Jason Biggs however is up in the air, with Biggs apparently sitting out Season Three entirely. According to the showrunners, the show simply opted not to focus on his character during the next batch of episodes. Biggs previously played lead character, Piper Chapman’s fiance and love interest, Larry Bloom.

Netflix gave a proper trailer for Season Three last week, with the episodes coming to the streaming service on Friday, June 12th of this year. Naturally, it looks like little has changed at Litchfield Penitentiary, beyond the addition of a handful of new inmates of course.

Loosely adapted from the memoir, Orange is the New Black: My Year in a Women’s Prison by Piper Kerman, Orange is the New Black follows the past and present lives of an ensemble cast of inmates at women’s prison, Litchfield Penitentiary. The show primarily unfolds from the perspective of Piper Chapman, who is busted and imprisoned for a crime she committed in the past with her former girlfriend, Alex Vause, who also happens to be locked up in the same prison with her.

Keep imprisoning Eggplante for all news and updates on Orange is the New Black.