NOTE: We apologize for the tardiness of this review. Our regular television reviewer was ill at the time of airing.

NOTE 2: Full spoilers for this episode of Agents of S.H.I.E.L.D. are present in this review

Agents of S.H.I.E.L.D. once again did standout work with all of its many plot threads this week, between Skye getting some more bonding time with her father, and Coulson’s crew making a deal with the devil when they find their backs against the wall.

“The Frenemy of My Enemy” finally found an effective way to unite Skye’s arc with the Inhumans with that of Coulson and the other S.H.I.E.L.D., though given what’s going on with Gonzalez’s crew, I don’t think that they’re supposed to be S.W.O.R.D. in the end. At this point, I’d say that they’d more likely be the Marvel Cinematic Universe incarnation of H.A.M.M.E.R., an organization that was meant to clean up S.H.I.E.L.D. after a similar compromise in Marvel Comics (though it was the Skrulls that compromised the organization in the printed panels, not HYDRA), and was actually teased with a subtle Easter Egg in Season One. H.A.M.M.E.R. was the brain-child of Spider-Man nemesis, Norman Osborn, the Green Goblin himself, but it’s unlikely that Osborn is going to have anything to do with Gonzalez’s outfit, even if they are indeed supposed to be the MCU’s version of H.A.M.M.E.R. Still, the H.A.M.M.E.R. possibility might give a glimpse of where the planned Agents of S.H.I.E.L.D. spin-off may be exploring.

But, putting all of that speculation aside from this episode, it almost felt like the other S.H.I.E.L.D., as they’re still known until further notice, took a backseat this week for the most part, with Skye and Coulson getting far more focus. There is one point where Simmons comes clean with May about her deception with the toolbox and Fitz, and May rats her out to Bobbi, though this doesn’t really go anywhere for now. May wanting to protect Simmons at the cost of Fitz and Coulson also felt a bit questionable, as did the rather contrived moment where Simmons and May glimpse Coulson working alongside Ward, naturally misunderstanding the situation.

Oh yes, that tease from last week is very much realized with Coulson’s arc this episode. Coulson and Hunter manage to capture Ward and Agent 33, making them a deal that they will be pardoned for their former actions against Coulson’s group during their time with HYDRA, if they help Coulson and Hunter dig into Strucker and List’s operations with capturing powered people, which Coulson seems to have been blamed for by Gonzalez.

On this note, it’s very cool to see Baron Von Strucker get some big attention on Agents of S.H.I.E.L.D., even if it’s only in mentions, since he’s not only a key villain of HYDRA in Marvel lore, but also plays a big part in the events of the soon-releasing Avengers: Age of Ultron. It would be great if the show’s final few episodes of Season Two benefited from the events of Avengers: Age of Ultron, just as the final few episodes of Season One benefited greatly from the release of Captain America: The Winter Soldier in theatres at that same time! 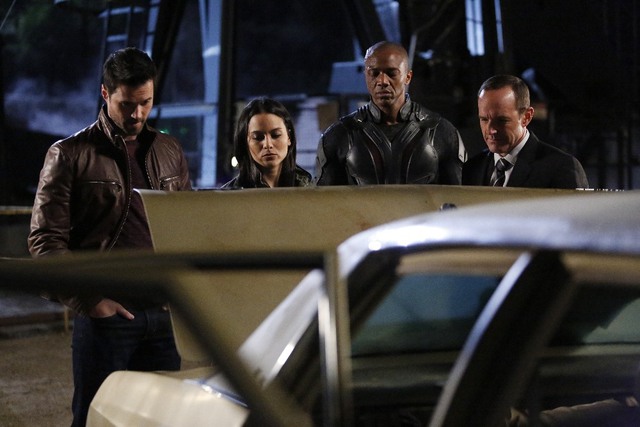 Naturally, the shaky alliance between Coulson, Hunter, Fitz and Ward was great stuff, with Brett Dalton getting another wonderful chance to play Ward like the smug sociopath he is. Still, it was satisfying to see Ward and Agent 33 not end up double-crossing Coulson in the end, even if they did consider it, since it goes to show that they’re not cardboard villains. Besides, that would have taken a bit of appeal out of their love affair, which effectively humanized them and made them more interesting during “Love in the Time of HYDRA” a few weeks ago.

As for Skye, she spent a good chunk of the episode simply wandering around Milwaukee with Cal, as Cal is disappointed to see the entire city change from what he remembers it. As with last week’s episode, it’s effective to see Cal in this emotional, almost tragic new light. His fondness for pastries also felt like a neat Easter Egg that references Kyle MacLachlan’s well-known turn on cult TV series, Twin Peaks.

Once again, another character made a cold decision, with Jiaying deciding to abandon Cal, and Skye doing her best to soften the blow, knowing that a sudden abandonment will make Cal angry and violent. Skye suddenly feeling sorry for her father and forgiving everything horrible that he did earlier in the season feels a bit forced, but at least it helps to develop Cal as a more complex character, as much as it’s also enjoyable to see him embrace full-blown villainy, such as in “One of Us.”

With Skye and Cal going to Cal’s old office (leading to Skye saying the name, “Daisy Johnson” aloud for the first time), the two end up in the same building as Coulson, Hunter, Ward and Agent 33, and this also draws Lincoln into a conflict with some HYDRA agents, after Lincoln is ordered by Jiaying to tail Skye and Cal. Like I said, this helps to bring together the Inhuman arc and Coulson’s arc into a unified story finally, and seeing Coulson’s frustration at having Skye mere inches from him before Gordon whisks her away was pretty heartbreaking stuff. Missed her by that much!

The moral ambiguity of the Inhumans nicely mirrors that of S.H.I.E.L.D., making them start fitting the show better than ever now. Seeing a more ruthless side to Skye’s mother was interesting (and ties in to some points earlier in the show, when Skye’s parents were said to have done monstrous things), just as it was satisfying to see Gordon muse about Raina potentially being the MCU’s first known psychic. The show has done an excellent job of managing its many plot threads and moral struggles, and it’s making Agents of S.H.I.E.L.D. better than it’s ever been at this point!

True to form, “The Frenemy of My Enemy” was another superb episode for the series. The shaky Coulson/Ward alliance was executed perfectly, as Skye and Cal continue to develop in a healthy new direction as well. With HYDRA now factoring more heavily into proceedings again, the show nonetheless seems unencumbered by the demand to do great things with its many busy storylines. Keep up the good work, Agents of S.H.I.E.L.D.!

Agents of S.H.I.E.L.D. 2.18: "The Frenemy of My Enemy" Review
Agents of S.H.I.E.L.D. continues to get better than ever this week, with a perfectly executed Coulson/Ward alliance, a satisfying new conflict for Cal and Skye, and a great way to amp up the involvement of HYDRA.
THE GOOD STUFF
THE NOT-SO-GOOD STUFF
2015-04-24
90%Overall Score
Reader Rating: (0 Votes)
0%