Surprise! Brooklyn Nine-Nine has finally returned after its very lengthy Spring hiatus, left with just four episodes before Season Two wraps up. The first of these episodes, “AC/DC”, gets the ball rolling on a reliable note, with a funny and inspired episode all around.

The main plot of the episode involves Peralta trying desperately to tail a perp, and initially being overjoyed at getting to pursue him in a movie-style chase of running atop cars. Peralta gets quite a nasty surprise however when he stumbles into a car’s sun roof, extensively injuring himself with multiple broken ribs and toes. 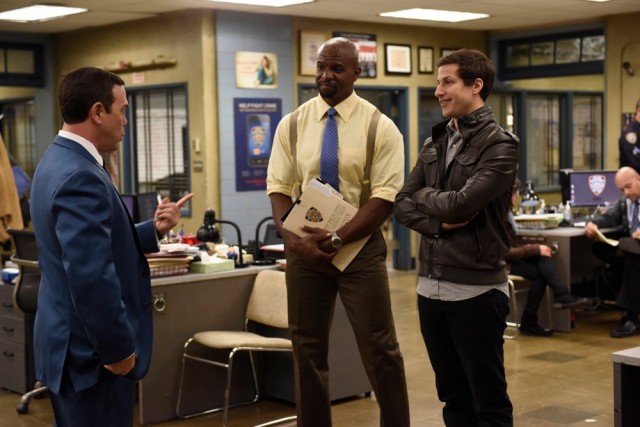 Jeffords tries to get Peralta to take a vacation, but Peralta refuses, with his single-mindedness leaving him unable to let go of his criminal. Peralta’s attempts to avoid drawing attention to his injury are as amusingly ineffectual as you would imagine, particularly when he tries to convince Jeffords that he’s fine, despite Jeffords obviously knowing better. A highlight laugh even comes when Peralta violates Jeffords’ rule of staying at his desk to go to the archives, and ends up injuring himself even more when he accidentally causes a shelf to fall on him.

After a while, it looks like Peralta has finally agreed to take some time off, inviting Boyle with him on a trip to Atlantic City. Naturally, it’s a trick, with Peralta trapping Boyle on a stakeout at the Seafam Hotel (the “O” apparently fell off), and Jeffords eventually skipping out on his family dinner to corner the two. After some more hijinx, Peralta gets trapped outside of a bathroom window, having to be rescued by Boyle and Jeffords when he believes he sees his perp, with Jeffords thereafter revoking his right to pee. Damn, that’s harsh…

After the perp finally is spotted, Peralta tries his best to give chase after Jeffords is made, following a call to Atlantic City police, leading to Peralta getting hit by a car, and properly hospitalized this time. This is when the biggest laugh of the episode came, with Peralta saying that he’s fine because all of his bleeding was internal, and that’s where blood is supposed to be. That hilarious quote is going to remind many a viewer of exactly why they love tuning in to this idiot on their Sundays. 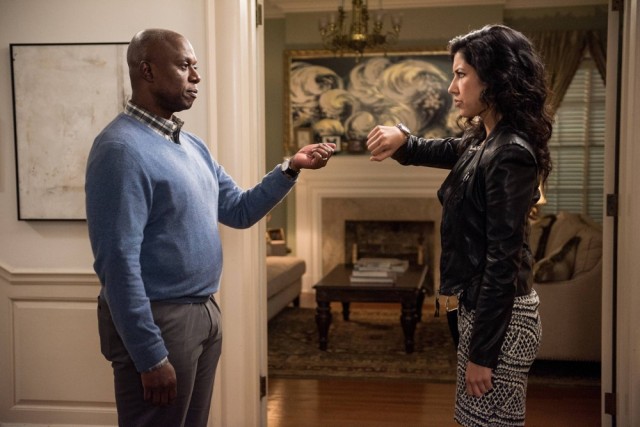 Over on the B-plot’s end, Holt and Diaz realize that they can no longer put off going to one of Kevin’s dinners, with Diaz having to bring Marcus along. As usual, the two vow to keep their professional and personal lives separate, and decide to assist the situation by inviting Santiago and Gina along as social buffers. Santiago is obviously the more thrilled of the two.

Santiago and Gina don’t show up too much, surprisingly, but their small scenes do get quite a few solid laughs. Santiago stinking up a train with her predictably awful cooking is pretty funny (and a nice callback to the first season’s Thanksgiving episode), particularly when she tries to show her considerate side by opening the subway train’s window, only to have Gina toss the salad she made out of it. This only got funnier when Santiago laments her salad being eaten by rats later, only to have Gina reply, “No, I’m pretty sure the rats were running from it.”

At the Holt residence, Diaz and Holt are awkward as ever, with Holt’s suggested neutral conversational topics being more hilarious gems for the episode, namely the Hubble Space Telescope and naming varieties of orchids. After Kevin ends up nosing into Diaz’s secrecy however, things get real for a second when she abruptly leaves the table, with Holt pursuing her, and Diaz confessing to Holt that she worries she may be pregnant. Holt must then calm her down with a very funny mix of discomfort and quiet support, rushing Diaz out for a, “Non-emergency emergency.” 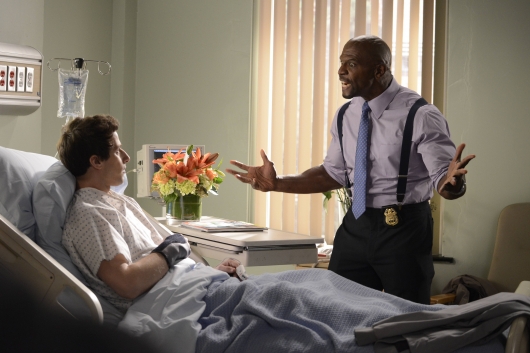 Since Diaz has to run out quickly, Santiago and Gina are told that the party is over right when they arrive, with the two breaking open their wine bottle and going to town on Holt’s porch… Until he turns the lights off. They come to work hungover the next morning, and wondering where they got their sunglasses from (apparently, Santiago paid $200 for them at a bodega stand), and have a nice bonding moment. Santiago/Gina pairings are surprisingly rarely tapped by Brooklyn Nine-Nine, or so it seems, yet they almost always work great. I was happy to see that trend continue here.

Of course, before you get too excited about Diaz, her pregnancy scare was a false alarm, and. frankly, felt like a bit of a cheat. Still, seeing she and Holt survive dinner, and more subsequent awkwardness with each other, was both funny and uplifting.

“AC/DC” certainly isn’t the best episode that Season Two has delivered, but it was, as expected, a funny and reliable kick-off to resuming episodes again after a long break. It’s a bit of a shame that the series is down to just three more episodes before Season Two is done, but hopefully, the wait for Season Three will be capped off by some quality laughs to follow this week’s solid offering.

Brooklyn Nine-Nine 2.20: "AC/DC" Review
Brooklyn Nine-Nine finally returned from its Spring hiatus with a funny and inspired episode, thanks to Jake getting (stupidly) injured in the line of duty, and Diaz and Holt yet again trying to separate their work and their personal lives.
THE GOOD STUFF
THE NOT-SO-GOOD STUFF
2015-04-27
84%Overall Score
Reader Rating: (0 Votes)
0%