Brooklyn Nine-Nine felt the need to dredge up the tired repressed attraction that Peralta harbours towards Santiago with “Det. Dave Majors” this week, an episode that felt like a pretty wide misfire. It seemed like the events of this week’s episode were solely put into place to start laying the foundation for the season finale in a couple of weeks, where it seems that Peralta and Santiago will inevitably confront their feelings, again.

Even a Garret Dillahunt guest role couldn’t make this episode interesting, which felt like a shame. There were some funny jokes with Peralta and Santiago both trying to impress Dillahunt’s super-cop, Dave Majors here and there, and the initial reaction of Peralta when Majors asks about trying to get Santiago to date him is pretty amusing. Sadly though, Majors, despite how much the show built up his ridiculously overblown reputation, felt like too unmemorable of a character. It was tough to see why Majors was so beloved by the department, since his personality was so non-descript, and we only get a couple of peeks into his interesting case history. This sinks a good chunk of the episode’s main plot, unfortunately.

The annoying thing is, the idea of a more beloved cop than Peralta pursuing Santiago and making him jealous as he’s forced to work with him isn’t a bad idea. What was a bad idea is putting this arc so late in the season, where it’s inevitably going to be swept under the rug far too quickly. Sure enough, that’s exactly what happened.

After Peralta seeks advice from Diaz, who can see his attraction to Santiago plain as day, she tells him to watch out for Santiago’s tell-all ‘double tuck’, where she tucks her hair back behind both ears and laughs. That’s when Peralta knows that Santiago really likes someone, and it’s over for him. On this note, Diaz doing a creepy impression of Santiago doing this was one of the funny highlights in an episode that could have used more effective comedy.

After Peralta tries to sneak into Majors’ secret speakeasy, constantly failing to get the password right in one of several Peralta-focused jokes that just didn’t work that well in this episode, he sees Santiago do the double tuck, and is promptly thrown out. Things look bad, but the next day, Majors reveals that Santiago turned him down. Wait, what?! Why?! 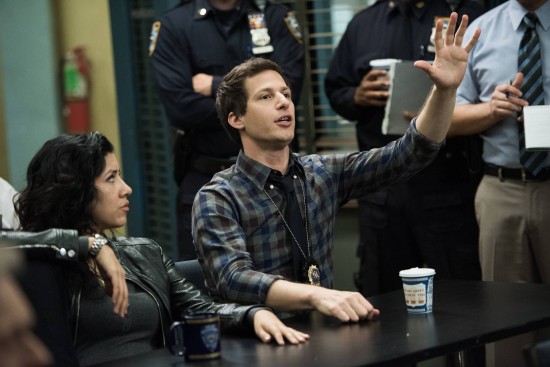 The episode then has Peralta ask Santiago about this, only to have her reveal out of the blue that she doesn’t want to date cops anymore, because of what happened with Teddy. Oh, come on! That just came out of nowhere, and it completely negated the scene with Diaz from earlier. Frankly, this felt like lazy writing, and it’s clear that the writers didn’t have an exit strategy for their main plot this episode, and had to awkwardly force one. Likewise, Santiago doing a double tuck when Peralta leaves the room felt far too predictable and on-the-nose. Why does this show insist on dragging out this would-be romance any longer? We all know it’s coming at this point.

At the very least, the subplot of this episode was a tad funnier, though it also introduced an arc that it had no business examining this late in the season, considering how it resolved it. Jeffords is offered a position by a security firm that Holt previously rejected on several occasions, with Gina and Boyle panicking, and trying to come up with increasingly ridiculous incentives to try and get Jeffords to stay at the precinct. Jeffords responds by saying that he has another child on the way, and needs to think about a more flexible job with better pay.

Again, things look grim, especially when Holt appears to get spiteful, and forces Jeffords to miss out on family time to digitize files. Initially, Gina and Boyle try to do this for him, only to have Holt tell Jeffords to digitize even more files. Despite some funny lines from Gina especially (Chelsea Peretti seems to consistently prosper, even in weaker episodes, just like Andre Braugher), things look bad, and the show would have you believe that it might be setting up an exit for Terry Crews.

Well, that’s not the case. Holt ended up playing Jeffords, making him realize the work he does for the community with the Nine-Nine, and motivating him to stay when Boyle and Gina couldn’t. Again, this felt like somewhat lazy writing, and begs the question of why the show even bothered with the threat of Jeffords leaving, if they clearly weren’t going to even pretend to see it through beyond this episode. It was a resolution that felt just as weak as the main plot with Peralta and Santiago.

“Det. Dave Majors” felt like a pretty obvious filler episode that largely failed to make any kind of impact, comedic or emotional. The jokes just weren’t that funny for the most part, and the resolution to both of the episode’s plots felt lazy and disappointing. Moreover, the beating around the bush with the Peralta/Santiago romance is still a big problem. Just get on with it, already! Stop riding the fence!

Hopefully by the end of the season, these two will just fess up their feelings and give it a shot, and we won’t have to deal with them making excuses anymore.

Brooklyn Nine-Nine 2.21: "Det. Dave Majors" Review
Brooklyn Nine-Nine misfired this week in an episode that wasn't that funny, and didn't carry a satisfying resolution for either of its main plots, on top of the continued annoyance of the Peralta/Santiago romance teases.
THE GOOD STUFF
THE NOT-SO-GOOD STUFF
2015-05-04
57%Overall Score
Reader Rating: (1 Vote)
74%