NOTE: Full spoilers for this episode of Gotham, including multiple major character deaths, are present in this review

With Penguin’s mob war erupting in full force, Gotham’s season finale set the stage for a bloody struggle for the city streets. With Falcone and Maroni at each other’s throats, things only get worse when Fish Mooney returns to town, and ropes Selina Kyle into her newest scheme. As clumsy as some of the foundations for this plot were last week, the stage was at least set for a decent climax for Gotham’s debut season. For the most part, “All Happy Families Are Alike” delivered that.

Unfortunately, it also delivered the same mess of story problems that last week’s episode, and many of the first season’s faultier episodes, were brought down by. For all of its impressive action and high stakes, “All Happy Families Are Alike” still felt like it suffered as a season finale, since some elements of it just didn’t add up very well. 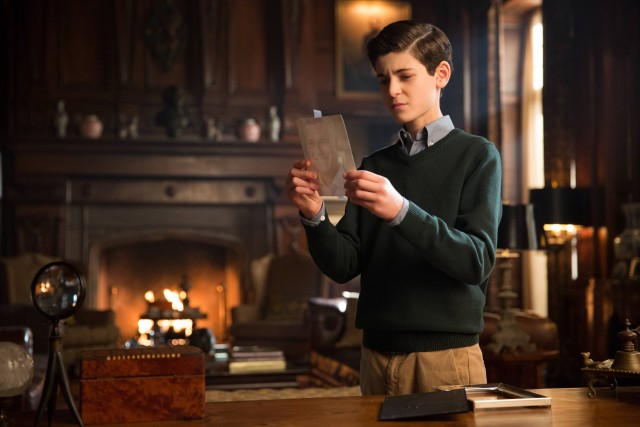 As the episode begins, we see a disguised Fish Mooney finally show herself on the outskirts of Gotham City again, having finally escaped the clutches of the Dollmaker. She meets up with Selina, warming her hands by a barrel fire with her fellow street urchins, and talks about the new day that is about to dawn for Gotham. From there, we fast-forward to two weeks later. Wait, what? The show’s never done that before, so needless to say, that was kind of an awkward start to the episode.

Next, we see Bruce Wayne poking around his late father’s office, smashing furniture, and continuing to prod for the secrets that he knows his father was hiding. Alfred tries (sort of) to steer the boy away from his quest, again, but naturally, Bruce won’t quit. He also hangs on to the cryptic words of Lucius Fox all the while, believing, no doubt correctly, that Lucius has charged him with cleaning up Wayne Enterprises, as its heir.

From there, we get another sudden jump to more violence in the streets, with Falcone getting hit by an RPG attack and injured right as the episode’s opening stinger plays out. When Gordon hears about it, he goes right to the hospital that Falcone is being hidden at, running into Penguin and Butch while he’s there. Seeing the murderous intent of Penguin, Gordon places the two men under arrest, ready to stand his ground against the inevitable assault by Maroni’s men, who will be looking to finish off Falcone. Naturally, Penguin tells him how stupid that is, but if we’ve known Gordon over the course of this season, we know that his convictions always trump reason and self-preservation alike. 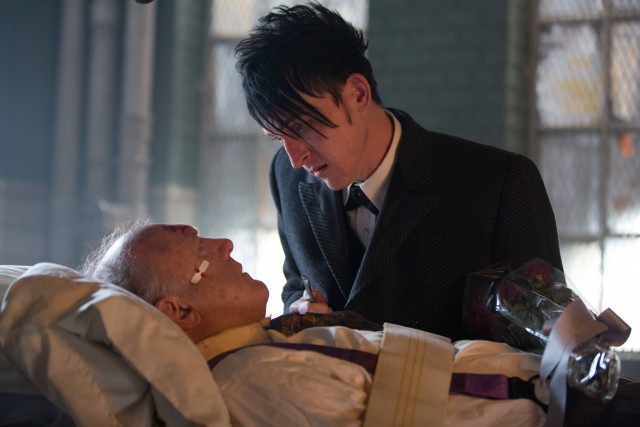 It’s not Maroni that comes to greet Gordon however, it’s Commissioner Loeb, who is directly overseeing the finishing of Falcone. Gordon threatens Loeb, only to end up in the first of a handful of pretty cool gunfights in this episode. Gordon manages to escape, thanks to some timely backup from Bullock, with the cop duo managing to smuggle Falcone, Penguin and Butch out of the chaos.

While this is going on, Leslie is asked by Barbara to be her counselor in the wake of her surviving her time with The Ogre, after Leslie insists that Barbara seek therapy. Initially, it seems to be going fine, though Barbara’s twisted side gradually begins to trickle out, with Barbara naturally exploiting the opportunity to try and poke holes in the relationship between Leslie and Gordon. Well, at least the character is now actively embracing the fact that she’s hated by most of Gotham’s viewers, despite being Gordon’s future first wife in DC lore.

Regardless, Falcone directs our heroes to a safe house, announcing that he plans to retire and move far away from Gotham City. Seriously? Now, he wants to retire?! That kind of came out of nowhere, and felt pretty forced. There’s not much time to question it though, as Falcone’s safe house ends up being compromised by Fish, with Falcone believing her to be dead, and thus the secret of his hiding spot with her. This leads to Gordon, Falcone, Bullock, Penguin and Butch all being captured. Damn.

Gordon tries to plead with Selina, sporting a radical new hairdo and make-up scheme alongside Fish, to be set free, but to no avail. The situation gets further complicated when Maroni and his men show up, with Fish threatening all of her prisoners with individual, personalized deaths, particularly Penguin and Falcone. Oh, but she’s good with Bullock though, apparently. Small comfort, considering that she’s still going to kill him.

When Maroni arrives, the two have a lengthy talk about their new planned regime for Gotham City, with the tension gradually elevating, after Fish ends up misunderstanding the dynamic of their new deal. With Maroni belittling her and continually drawing attention to the fact that Fish will be number two again, Fish appears to stand calmly, until she eventually grabs a gun and shoots Maroni in the head, killing him instantly.

Wait, seriously?! Holy crap! This is the first critical deviation that Gotham has made from the Batman mythos, where crime boss, Sal Maroni is still a living and present danger to Gotham City, even as Batman prowls the streets. He even appeared twice in the live-action Batman movies, once very fleetingly in archive footage in Batman Forever, and with a larger part as a key mob boss in The Dark Knight. In fact, in most of Batman lore, Maroni is responsible for the courtroom acid attack on Harvey Dent, which disfigures him and transforms him into Two-Face, with Batman Forever also using this as its Two-Face origin. Clearly, that’s not the case for Gotham, with Maroni quite clearly dead and gone. Then again, it’s entirely possible that Gotham may end up playing the, “He Had a Son With the Same Name” card, by the time Batman comes around. If not, this drastically increases the likelihood that Harvey Dent will already be Two-Face before Bruce Wayne dons the cape and cowl in this self-contained pre-Batman universe. Maybe we’ll get to see Nicholas D’Agosto become the schizophrenic Batman baddie at some point on this series after all. 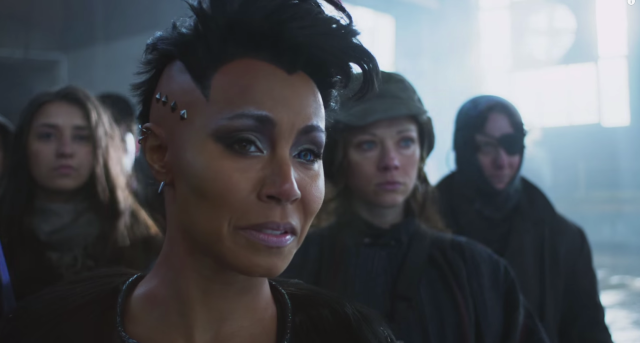 In any case, putting aside that big twist, Penguin ends up pursuing an escaping Fish, with the two struggling to the death on a rooftop overlooking a sharp drop into the sea. Butch catches up with them, pointing a gun, which leads to a cliched and eye-rolling, “Which One Will He Shoot?” moment. Surprisingly, the show played this off well though, with Butch capping both Fish and Penguin, but later rushing to Fish to tend to her. Penguin knocks out Butch however, and throws Fish off of the roof, before declaring himself as the new King of Gotham in his final scene of the season.

So, Fish Mooney also ended up dead, since it’s nigh-on-impossible that she could have survived a fall that high, even into water. This turnout was more predictable however, since Jada Pinkett-Smith had already previously confirmed that she would be leaving the series after the first season. It’s too bad that her character started out awesome, but progressively got worse as the season went on, and even her death by Penguin’s hands was middling and predictable. Fish deserved a better exit, but the one we got could have been worse, even if it does leave Selina hanging for now.

As Gordon returns to Barbara’s apartment, he sees Barbara and Leslie fighting, with Leslie struggling for her life after Barbara attacks her, and attempts to murder her. Yeah, naturally a woman who already had a ton of issues was only going to get more issues after that Ogre mess. Still, Leslie manages to knock out Barbara after a tense fight. Erin Richards was undeniably amusing and scary simultaneously as the crazed Barbara too, making this otherwise ridiculous scene work out better than it could have.

Gordon is then left having a brief talk with Falcone, who re-affirms his retirement, telling Gordon that Gotham City needs a lawman to fix it, not another criminal. Gordon’s certainly got his work cut out for him, but thankfully, we have a second season to look forward to him doing some good work for the city.

Also, somewhat crowbarred in before the final scene, we see Ms. Kringle confront Nygma about realizing that the first letters of the forged message from her dead boyfriend spell out Nygma’s name. Nygma manages to brush her off, before having an extended mental breakdown, showing his first true face as the disheveled, obsessive-compulsive future Riddler. It was a solid scene, but it would have been better, had this conflict actually gone somewhere in this episode, and not just petered out to be addressed next season. That felt like a waste.

The season finale then wound down with Bruce and Alfred, as Bruce finally pieces together Lucius’ hint about his father’s true nature. Bruce finds a switch that opens a passage from the nearby fireplace, leading into a dark, ominous cave, punctuated by the sounds of bats. Yep, it’s that cave, and that’s where the first season of Gotham concludes. 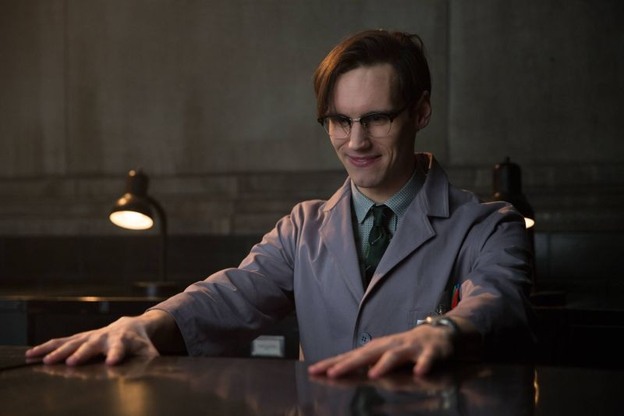 This season finale could have been worse, but it also could have been a lot better in some key respects. Falcone’s retirement felt like a lazy way to seemingly send off his character, even if the shocking death of Maroni nicely compensated for that. Likewise, Fish dying and Penguin assuming her place felt too predictable, and as much as it sounds like a nitpick, Alfred didn’t really try very hard to discourage Bruce’s snooping for the episode’s inevitable Batman tease at the end. Barbara’s murder attempt also kind of came out of nowhere, even if this scene did prove entertaining to watch. Lastly, the awkward placement of that Nygma/Kringle scene was very noticeable, and felt like one of the most blatant areas where the show was scrambling to wrap up all of the dangling plot threads in Gotham for the season’s end.

Gotham’s hit some considerable bumps in its first season, and the way that the season wrapped didn’t erase the damage from those bumps entirely. It still leaves the door open for a more refined and enjoyable second season though, so I’ll still miss this shaky little series while it’s gone.

Gotham 1.22: "All Happy Families Are Alike" Review
Gotham ended its first season on a disappointingly uneven note, having some great action and a few effective shocks in the season finale, but also suffering from more problematic story elements and a few lazy turnouts.
THE GOOD STUFF
THE NOT-SO-GOOD STUFF
2015-05-05
72%Overall Score
Reader Rating: (0 Votes)
0%