Having a proper Gorilla Grodd introduction on the very first season of The Flash is incredibly ambitious. Grodd, while not having the same personal connection to The Flash that higher-billed villains like Professor Zoom or Captain Cold have for example, is arguably one of the Fastest Man Alive’s most abstract and formidable foes. Grodd has even served as a large-scale threat worthy of the entire Justice League’s attention in DC lore, being intelligent and powerful enough to lead an entire army of DC super-villains at worst, despite, you know, being a gorilla.

Fortunately, “Grodd Lives” did the character great justice, even for a primetime live-action show. It was a fun and surprisingly intense episode, even with the virtual absence of Harrison Wells in the episode’s main plot. Sure, Wells is claimed to have unleashed Grodd, but this episode showed surprisingly little acknowledgement of that from the Reverse Flash himself, who spent the entire episode taunting Eddie, and not much else.

Anyhow, the episode begins with Barry dashing around the city looking for Eddie, while an Iris monologue kicks things off, after Iris learned of Barry’s identity as The Flash at the end of last week’s episode, presumably because of the timeline convergence. Eddie isn’t found, naturally, but Barry, Cisco and Caitlin nonetheless run into a different problem, after a masked, armoured thief attempts to rob the Central City gold deposit on more than one occasion. After an initial attempt by Barry to stop the man, he is bombarded by mental imagery and forced to flee, leading to speculation that the S.T.A.R. Labs crew is dealing with yet another metahuman.

An even greater surprise is in store however, when a subsequent robbery leads to Barry successfully apprehending the perpetrator, and seeing that it’s none other than General Wade Eiling, who has been missing for weeks! Not only that, but Eiling is catatonic, speaking oddly and monstrously, as if being controlled by something else. When Eiling is questioned, he says that he is not Eiling, but Grodd, and that he should be feared. Yes, Grodd’s psychic abilities are already pretty dangerous at this point, with Eiling being their first proper victim!

While this is going on, Iris confronts Detective West about knowing Barry’s secret, leading to a bit of an argument between these two, even if West admits that he might have been misguided in keeping Iris in the dark about Barry. Iris is upset at her father, and similarly chews out Barry himself, walking right into S.T.A.R. Labs conveniently as Barry is in his Flash outfit. I have to say though, the reactions from Cisco and Caitlin to Iris simply walking in when Barry is in his Flash gear were pretty funny. 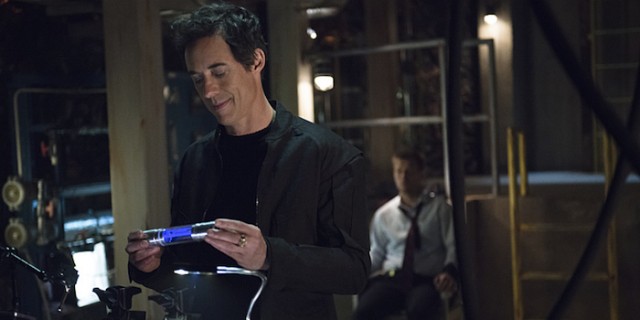 The Barry/Iris drama initially threatens to be tedious again, but it’s not bad this time, as Iris and Barry both confront each other about their secrets. Even Iris yields somewhat to lying to Barry about her true feelings for him, with Barry now being certain of them, given that he saw the future headline where Iris is revealed to be his future wife. Even Detective West seems on board with this too. Wow, poor Eddie.

Speaking of poor Eddie, Wells tells him all about his future, and how the Thawne bloodline flourishes with powerful men that make history, with Eddie being the only lowly, forgotten heir to the lineage as a mediocre police detective. He then caps off the bad news by showing Eddie the same newspaper from 2024, revealing that Barry will marry Iris, not Eddie. Yikes. That’s bound to have some big consequences later.

This also begs the question of whether Wells is setting up Eddie to succeed him as the Reverse Flash, should anything go wrong. In DC lore, the main Flash arch-nemesis and Reverse Flash, Professor Zoom, the printed panels’ version of Eobard Thawne, becomes a villain simply because he glimpses the future and learns that’s his destiny, and it ends up driving him insane, despite his admiration of The Flash. If Wells is building up Eddie to go to that dark place so that he can become a menace to Barry in the present, it could be an ingenious way to allow Eobard to return home, while his ancestor can finish the work he started in the present, or the past, or, whatever. That’s an educated guess, but it would be a pretty satisfying payoff to this whole overblown Eddie kidnapping. 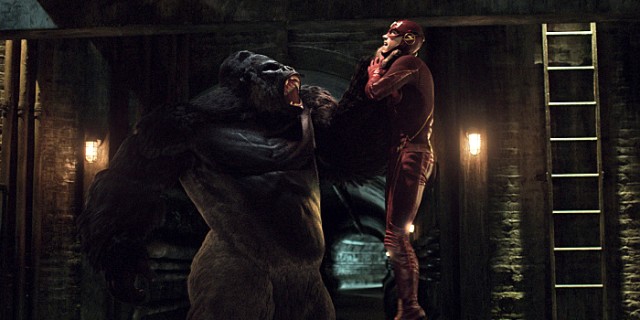 Anyway, Barry and co. learn about Grodd, whom Caitlin apparently helped look after when Wells and Eiling were experimenting upon him, and put together that the mysterious disappearances in the sewers could be because of Grodd. Barry, Cisco and Detective West then decide to go into the sewers and hunt the animal, gradually seeing eerie signs of his growing intelligence. Eventually, the trio is easily overpowered, and West is snatched by the gorilla. West is also apparently afraid of gorillas, leading to a vulnerable and bloodcurdling cry for help that’s, frankly, the most terrified we’ve ever seen this normally collected character.

The interactions between Grodd and West are intense stuff too, particularly when Grodd almost makes West shoot himself with his sidearm in another psychic attack. Grodd is angry and dangerous, and seeing West so helpless before him did a wonderful job of illustrating why this villain is such a terrifying threat. Like I said, Grodd is a difficult villain to sell on a primetime live-action TV series, especially this early. He’s a freakin’ gorilla! He so easily could have ended up so outlandish and silly. That’s not the case though. This episode does the impossible and actually makes Grodd legitimately scary, and that’s made all the better by the fact that the Grodd effects are actually really good, despite the limited TV budget. It’s all around great stuff!

After Cisco and Caitlin build Barry a helmet that will help him block out Grodd’s psychic attacks, Barry returns to the sewers, and engages in a pretty satisfying hand-to-hand scrap with his primate foe. Grodd ends up tossing Barry through a wall however, knocking his helmet off, and then paralyzing Barry as a service train is coming right into his path. Cisco and Caitlin are unable to shake the hypnosis, but Iris chimes in, telling Barry to focus on her voice, and fight Grodd’s influence. This was a bit cheesy, but at the last second, Barry breaks free of Grodd’s control, and throws him into the train’s path, defeating him. Barry then finds Detective West, and they both return to S.T.A.R. Labs. Mission accomplished! Sure, Grodd is still alive, and is shown above ground before the epilogue stinger, but hey, it’d be a waste to toss away such a great Flash villain so soon!

The group celebrates proving that they don’t need Wells to save the city, or even Barry, and also fully welcome Iris into being a part of the team. Eiling is also released, now free of Grodd’s control, though he reveals that he knows Barry is The Flash. He doesn’t care however, saying that if he wanted to capture Barry, he would have done it a long time ago, since he (and presumably A.R.G.U.S.) have known for a while. Barry then says that Eiling will one day get what’s coming to him as he walks out.

The episode then concludes with Wells saying that he’s found some sort of mysterious key to Eddie, and revealing that he’s re-built the Particle Accelerator in secret. He then declares that it’s time for him to return home, right as this episode ends. Looks like Wells’ endgame has been made clear. 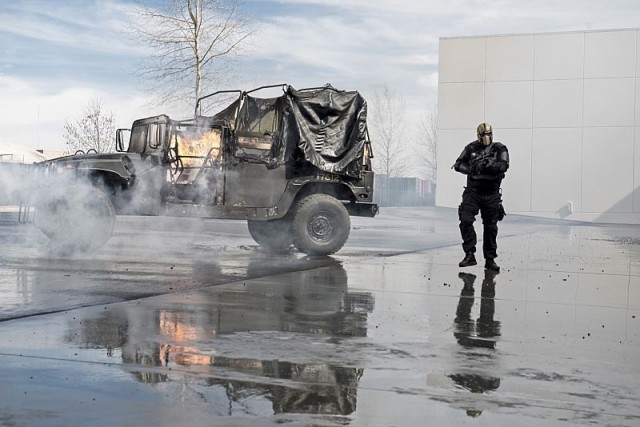 “Grodd Lives” was another smash hit episode for The Flash in the continued lead-in to the season finale in a couple of weeks. Grodd didn’t disappoint in his proper villainous debut, and the inevitable drama of Iris learning of Barry’s identity as The Flash worked surprisingly well. Even Wells spending the entire episode taunting Eddie was great stuff, setting up an interesting idea that Wells may be building himself a new villain to take out The Flash, if he is indeed to return to the future.

Regardless though, The Flash continues to be better than ever!

The Flash 1.21: "Grodd Lives" Review
Gorilla Grodd made his proper debut as a Flash villain this week, and was excellently realized, while the character-focused drama also proved to be a superb highlight on another winning episode of The Flash!
THE GOOD STUFF
2015-05-06
95%Overall Score
Reader Rating: (0 Votes)
0%