NOTE: Full spoilers from throughout the first season of Gotham are present in this review

Gotham is a series that’s had the most unlikely of bumpy roads. While The Flash and iZombie became huge successes over on The CW from DC’s stables this season, and even NBC’s cancelled Constantine garnered quite a strong fan following, Gotham was the DC Comics-inspired series that had the most promise, and ironically ended up the most disappointing, at least in its debut season.

Now, before I go on, allow me to emphasize that Gotham is disappointing, not outright bad. Objectively, it’s a decent series so far. It just needs refinement, much like Marvel’s competing Agents of S.H.I.E.L.D. did in its debut season, before finding its footing in its second. Given the outstanding quality of most comic book-inspired movies and TV shows these days, it’s true that fans of both DC and Marvel have become a bit spoiled as a result, and tend to come down very hard on shows that are anything less than outstanding, ignoring the latent potential of shows that don’t burst out of the gate, firing on all cylinders like The Flash and iZombie did. Gotham is a flawed series so far, that’s for sure, but if you’re going to write it off and pretend that it’s the worst thing that ever happened to Batman lore, then that’s not fair, and you know it. 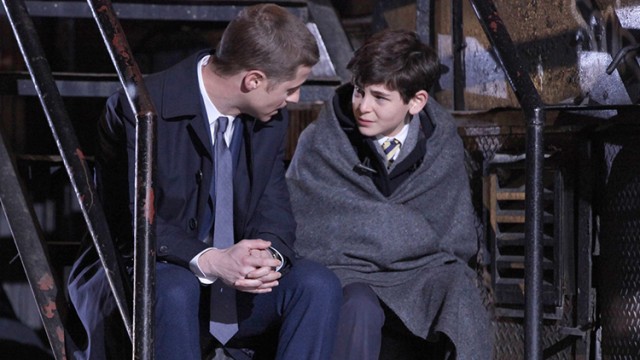 First, the high points. Gotham looks awesome. It’s one of the best-produced shows of the past season, for sure, with style and atmosphere that positively leaps off of the screen, even for a TV show. The mish-mash of various Batman sensibilities from throughout the series’ 75+-year history makes for a great showcase of why this dingy cess pool of a city has endured in pop culture for nearly a century now, even beyond comic books. The city itself is one of the best parts of the series, even without Batman at this point, so you certainly can’t accuse Gotham of failing to deliver on its title’s promise.

Likewise, say what you will about the dampening of the philosophical debate between Batman being the catalyst of his villains, a debate that Gotham completely takes off of the table, but the portrayals of the villains themselves contained more hits than misses, especially amongst the lead antagonists. Robin Lord Taylor stole most of the season as The Penguin, before he actually becomes the vicious crime boss that he is when Batman prowls the streets, boasting an almost sinister politeness, with a lust for savage violence hiding just underneath. Penguin started to stumble a bit as the season wound down, namely in how he was stuck running a club that he strangely didn’t know how to run for a few episodes, but once he found his footing again, he brought a lot of positive momentum with it, closing out the season on a great note as he triumphantly murders his old boss, and declares himself the King of Gotham City.

Likewise, Cory Michael Smith delivered another standout turn as a pre-Riddler Edward Nygma, who currently works as a forensic scientist at the GCPD. Seeing the gradual unhinging of Nygma’s character, right before his full-blown psychotic break at the end of the season, was quite a delight. It seems probable that Nygma might take over as a key villain in Season Two, much like Penguin was in Season One, and I do hope that’s true. Smith delivered one of the season’s highlight performances as Nygma, so it’s a shame that his character is still in the early stages for now. 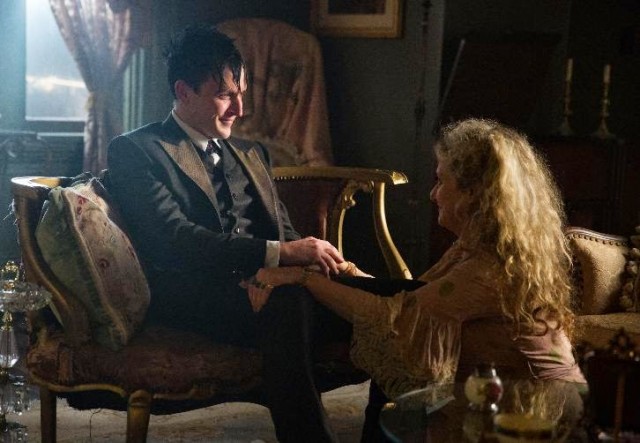 Unfortunately, other villains didn’t turn out quite as well. Gotham crammed in an absurd amount of B-list and C-list throwaway villains from Batman’s Rogues Gallery, between Electrocutioner, Copperhead, Black Mask, Amygdala, and Victor Zsasz, among others. Zsasz was solid fun, but the other characters completely failed to resonate. Even a two-part event involving The Scarecrow, and his equally deranged pops, kind of fell flat a tad, though its first half made for one of the season’s better episodes at the very least. Likewise, the introduction of a pre-Two-Face Harvey Dent was at least well portrayed by Masters of Sex’s Nicholas D’Agosto, but he was let down by constantly being stuck in idiotic storylines. Hopefully he comes back in Season Two with some better plot material.

As much as Gotham wanted to be about a mob war between established rivals, Carmine Falcone and Sal Maroni as well, it felt like this plot element was brought up, then abandoned, then brought up, then abandoned for seemingly the entire back half, before suddenly showing up again to anchor the season finale. This came at the greatest expense for Jada Pinkett-Smith’s one-season character, Fish Mooney, who was meant to push the whole mob war thing, before the show walked away from it, leading to Fish ending up in an awkward interim space with the Dollmaker in the show’s back half, another C-list DC villain tossed in to Season One with little effect (after appearing in a separate incarnation on The CW’s Arrow during its second season, no less!), and then ending the season by being unceremoniously killed by Penguin. Fish was tragically a character of diminishing returns, with her highlight moment being the anti-canon murder of Sal Maroni in the season finale, which raises a lot of questions about the origin of Two-Face in this particular self-contained pre-Batman universe, assuming that Gotham doesn’t wimp out of that death down the line by giving Maroni a son with the same name or something.

As for the heroes, they ranged quite significantly. Sometimes they were awesome, and sometimes, they were annoyingly mis-executed, much like the show’s first season itself. Ben McKenzie delivers a solid turn as the young James Gordon, long before he becomes commissioner of the GCPD, and Donal Logue is a worthy supporting lead as the reliable, but morally questionable Harvey Bullock. These two have solid chemistry, but again, they deserved better storylines. Some episodes gave great storylines for the cops individually, but they too rarely had one together. “Everyone Has a Cobblepot” felt like the only memorable exception, which brought Gordon’s and Bullock’s separate GCPD tactics to a head, even if “Spirit of the Goat” delivered another especially strong episode that showed why Bullock became who he is, earlier in the season. 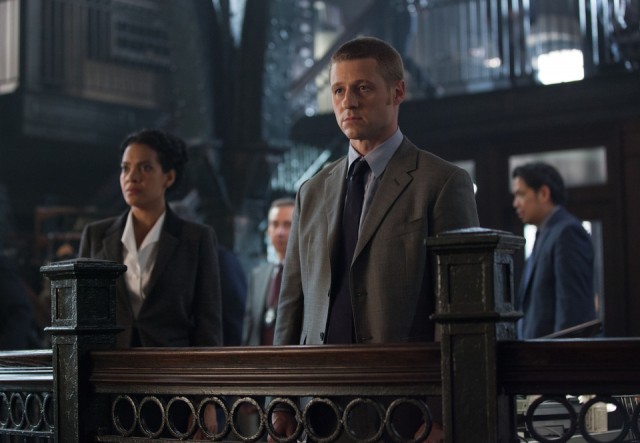 Gordon’s character benefited greatly from ditching his original love interest, Barbara Kean as well, with Morena Baccarin’s Leslie Thompkins being a far more enjoyable and reliable match to Gordon, even if this also goes against DC lore. Gotham benefited from running with the fact that most fans hated Barbara later in the season, with Barbara going full-blown crazy after hooking up with one of the show’s best original villains of the debut season, The Ogre, towards its end. It’s just too bad that the series wimped out of this at the last second, turning Barbara into a victim again. Still, I was very happy to hear that Morena Baccarin has been promoted to series regular for Season Two. More of Leslie will definitely work in service to Gordon’s character.

Even if it wasn’t originally the plan, Bruce Wayne was a part of the series, alongside a young Selina Kyle, who helps to tap into Bruce’s eventual mastery of stealth and interrogation as Batman, even if Bruce currently doesn’t have the spine to see through such tactics. Bruce was a character that struggled to find his footing for a while, only really making a sizeable impact towards the season’s end, when he applies himself to investigating and cleaning up the corruption taking root at his parents’ company, Wayne Enterprises. We never found out exactly who killed the Wayne parents in Season One, though hopefully Bruce’s investigation finds the answer in Season Two.

Fortunately, Sean Pertwee’s excellent Alfred portrayal picked up the slack, even when Bruce’s character struggled to find his place in the series. Pertwee’s Alfred is a rough, no-nonsense caretaker who is often blunt in his ways, and fully admits to not having the expectation or wisdom to raise a young man. Alfred often pushes Bruce to learn hard lessons, but he’s not without compassion. He’s a tough and reliable military veteran that is dead set on unlocking Bruce’s potential, for better or for worse. Put simply, Alfred is a badass, and like Cory Michael Smith’s Riddler, he was one of the show’s best B-list characters, one that I hope gets a lot more billing in Season Two!

Gotham is all over the place in its first season, and it definitely needs to stabilize in Season Two. Fortunately, the pieces are all laid about for a truly excellent comic book drama. They just need to fit together in a satisfying way. Given how much Agents of S.H.I.E.L.D. turned around between its first and second season though, I have every bit of faith that Gotham can improve in a similar fashion. Even its shakier first season has plenty to like though, if you keep an open mind. A good chunk of it needs work, but the show’s definitely not wanting for style and quality performances, especially amongst the villains. 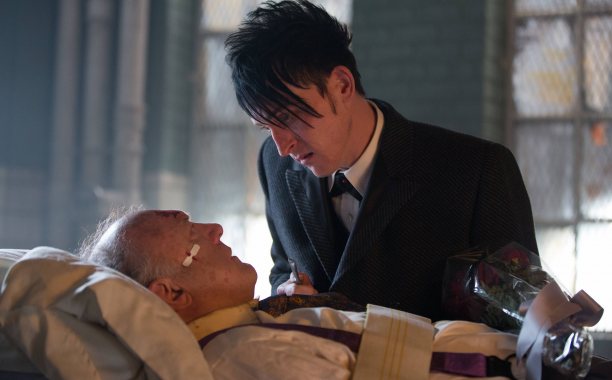 With the kinks hopefully ironed out, and the proven success hopefully working in the show’s favour next season, here’s hoping that Season Two of Gotham finally gives us the primetime Gotham City TV drama that we know FOX can deliver. For now though, Season One could have been better, but it definitely could have been worse too.

Gotham: Season One Review
Gotham felt rather sloppy and uneven with its storytelling in its first season, but it still stood nicely on plenty of atmosphere and style, as well as no shortage of superb performances. Hopefully, Season Two can finally put the pieces together, into something truly excellent.
THE GOOD STUFF
THE NOT-SO-GOOD STUFF
2015-05-13
74%Overall Score
Reader Rating: (0 Votes)
0%