With Upfronts currently unfolding, the traditional time where major TV networks lay out their schedules of shows for the upcoming season, TNT was announced to be picking up some new shows, along with its parent network, TBS. Conspicuously absent among these shows was Titans, a live-action primetime series in the works for TNT, which is set to be an adaptation of beloved DC Comics series, Teen Titans. Since being announced in September, the show got a pilot order, but the network has been mum on it ever since. 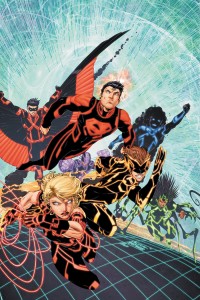 Well, if you’re worried, you can officially relax. Titans is still in development, as confirmed by TNT president, Kevin Reilly, and it has NOT been passed on or shelved! It’s just sitting out this season, since the network wasn’t able to produce the pilot that was ordered in time, with a cast still not being assembled for the series, even though its lineup of title characters has apparently been decided. Reilly also claimed that producer, Akiva Goldsman was ultimately too busy to get the pilot going for this season, though they have discussed it at length, agreeing that it should be very true to the source material, but also very clearly distinct from the, “Well-serviced” network TV landscape of DC superhero shows, namely from the likes of Arrow, The Flash and Gotham, along with no doubt CBS’ upcoming Supergirl series, and upcoming Arrow/The Flash ensemble spin-off, Legends of Tomorrow on The CW.

Titans is confirmed to star a young Dick Grayson, when he first abandons his role as Batman’s sidekick to patrol the streets of Boston as a local vigilante. It’s believed that Grayson will still be operating as Robin at the start of the series, though will eventually adopt his subsequent Nightwing mantle from DC lore, which he makes for himself after ending his tenure as the first Robin, operating as an independent vigilante out of fictional city, Bludhaven, a locale that has been featured and mentioned several times on The CW’s Arrow. The show’s title lineup will also consist of Starfire, Barbara Gordon (likely under her paralyzed ‘Oracle’ persona), Raven/Rachel Roth, and the double act of Hawk/Hank Hall and Dove/Dawn Granger. Other team mainstays, Cyborg and Beast Boy won’t be present in the series, at the very least not in the pilot, though this is unsurprising in the case of Cyborg, who is likely off-limits for Titans now, due to playing a large role in the DC Cinematic Universe as a founding Justice League member in DC’s shared movie universe. 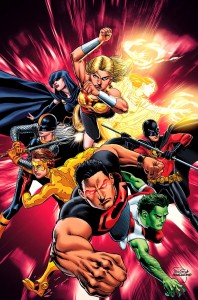 Titans is self-contained at this point, though since it falls under the Time Warner company umbrella, with Time Warner being the parent company of Warner Bros., itself the parent of DC Comics, it’s theoretically possible that it could eventually cross over with other DC shows, if it’s successful. Arrow star, Stephen Amell recently spoke about this, claiming that Supergirl and Titans are both fair game to cross over with The CW’s DC Television Universe if the networks reach the appropriate deal, since The CW has owners from both CBS Corporation and Time Warner. Amell claimed that there was even a since-aborted plan to feature Matt Ryan’s Constantine as a guest star on the newly-wrapped third season of Arrow, even before NBC cancelled Constantine recently, where he would be consulted as an expert on the Lazarus Pits used by the season’s big villain, Ra’s Al Ghul.

Regardless though, it looks like we’ll be waiting an extra year to have a chance at seeing Titans. This means that the only other currently up-in-the-air DC television project is Krypton at Syfy, a distant Superman prequel set on said hero’s doomed home planet long before it explodes, which was announced at the end of last year, and hasn’t been heard from since. Warner Bros. and DC are also currently shopping around Constantine after it was cancelled by NBC, trying to find a new network to host it so that the show can continue past its shortened debut season.

Keep rallying to Eggplante for all news and updates on Titans, and other DC television projects.