Pitch Perfect was one of the defining surprise hit movies of 2012. A spirited girl power comedy set in the world of collegiate acapella, the movie was silly and a bit simple-minded, but it nonetheless struck a chord with audiences, due to its incredible charm and heart, along with its very quotable and hysterical comedy. Given such a return on such an unlikely project, it seemed inevitable that we’d be getting a sequel.

Sure enough, here it is. What’s most surprising about Pitch Perfect 2 is certainly not that it exists however, but that it actually manages to compare to, and sometimes even surpass its predecessor! The sense of heart is magnified in a surprisingly emotional storyline that actually doesn’t make any effort to keep sequel-baiting, which is pretty noble on the part of Universal, considering their tendency toward sequelitis. Pitch Perfect 2 simply does what any good sequel should do, taking a great story, and building upon it to produce another movie with the same appeal as its predecessor, but bold and confident new material as well.

As with the first movie, it’s not just the intended young female audience that will get a serious kick out of Pitch Perfect 2 either. Even male viewers will find the movie to objectively be a lot of fun, boasting an enjoyable acapella soundtrack across several genres of music, along with more great, off-the-wall comedy. Best of all is that first-time director, Elizabeth Banks, who also reprises her role as snappy commentator, Gail Abernathy-McKadden (Feinberg) in this sequel, pulls the movie together on an incredible foundation of heartwarming themes of friendship and self-examination.

Pitch Perfect 2 thus ends up being far better than it has any right to be, especially given that it follows an equally unlikely hit in the original Pitch Perfect. Those expecting an entertaining, hilarious and charming crowd-pleaser will definitely enjoy the reunion with the Barden Bellas!

Most of the Bellas are back in the sequel, with only Anna Camp’s character, Aubrey no longer being present for the most part. Camp’s presence is still felt at one point, without spoilers, though leadership of the group now seems to be shared between Brittany Snow’s Chloe, and Anna Kendrick’s Beca. The rest of the fan-favourites, between Stacie, Cynthia, Lilly, and of course, Rebel Wilson’s Fat Amy, are all present and accounted for. 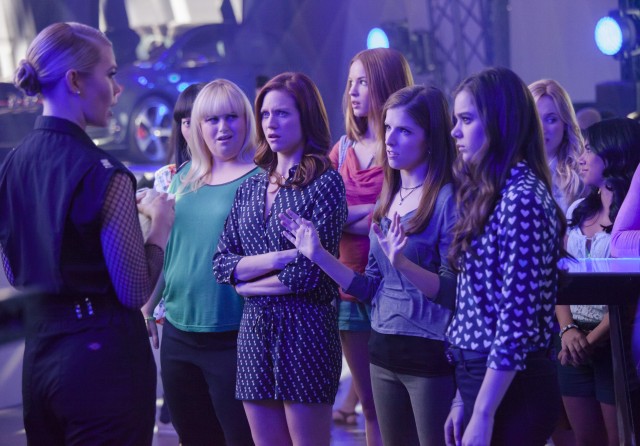 Pitch Perfect 2 makes some new additions to the Bellas as well, namely in an all-new immigrant character whose schtick is curtly referencing a dark former living situation in Flo, played by Chrissie Fit, and a ‘legacy’, a daughter of a former Bella, named Emily, played by Hailee Steinfeld. Emily seems to fill in for Beca as the driving emotional force behind the group, now that Beca has a new conflict of having to look to her future, now that she has a shot with a major recording studio, managed by an eccentric, comically strict producer played by Keegan-Michael Key. Emily also seems to hint at a possible succession move for the series, should Universal decide to keep making sequels, even after Pitch Perfect 2’s seemingly climactic story, and this makes her a key part of the sequel’s plot, though I can’t spoil how.

Other supporting characters from the first movie also return, namely the double act of Gail and John providing their hysterical, vaguely offensive commentary, as well as competing all-male acapella group, the Treblemakers, which still include Beca’s boyfriend, Jesse, and socially awkward Benji, who now takes a shine to Emily. Bumper is conspicuously absent at first, but don’t you worry. The movie does something pretty inspired with him, especially when he inevitably continues the joke of the implied flirtation with Fat Amy.

With the Bellas put into a new bind, now that they’ve become regional acapella champions after the events of the first movie, we also introduce some new antagonists in Pitch Perfect 2. Said antagonists are superstar German acapella group, Das Sound Machine. They’re intimidating German stereotypes, but thankfully, they don’t grate, on account of some good comedy material written for them, namely in how Beca is constantly sexually threatened and confused by their female co-leader, Kommisar.

Once again however, it’s the Bellas that drive everything forward, with the other characters simply amounting to gag fodder or plot devices, or sometimes both. There’s a lot of heartfelt exchanges between the characters in what’s otherwise a pretty silly, light-hearted movie, and there is a hanging cloud of finality over everything, as the Bellas are all about to graduate. This means that they’ll be walking away from the group and starting their lives, with only Chloe seeming to resist the current, admitting that she’s intentionally failing bird courses to stay with the group.

The reason why the sequel feels like it does one better than its predecessor is the fact that it manages to effectively emotionally spotlight all of the leads, and not just Beca this time. Sure, some, like Lilly and Flo, are only there for the sake of jokes, and are still largely left to the imagination, but the way that Pitch Perfect 2 provides diverse and compelling character conflicts for its leads is pretty astounding. It amplifies the heart to a superb degree, and makes Pitch Perfect 2 carry surprising weight, even at its goofiest.

Bringing everything home is a pretty potent array of cameos as well. David Cross, Katey Sagal, Snoop Dogg and a few other bit parts are all executed very well, often being very funny, and in the case of Sagal, rounding out the movie with even more charm. There’s one particularly ambitious cameo during the inevitable riff-off sequence that will no doubt have audiences in stitches as well. Trust me, you’ll know it when you see it!

Pitch Perfect 2 has done wonderful work with its characters, both the returning favourites, and the new additions. It’s a bigger and better cast that takes the effective foundation of the original personalities even further!

Pitch Perfect 2 tackles a surprisingly heavy storyline, considering the otherwise goofy tone. It sort of brings the swell of girl power from the original back down to Earth, without sacrificing said girl power’s appeal.

The Bellas are more vulnerable than they were before in this sequel. This is really hammered home by the fact that they’re brought down pretty sharply by a rather humiliating performance for the president in the intro, which seemed to result from the first movie’s devil-may-care progression reaching a natural and hilarious endpoint. In an interesting way, Pitch Perfect 2 is a story of redemption as much as it is a story about friendship, and most importantly, sisterhood.

Of course, this is still a Pitch Perfect movie, so Pitch Perfect 2 doesn’t really steer things into the realm of being outright depressing. It’s still a feel-good comedy with more than its share of silly, over-the-top moments. Like its predecessor, it’s also filled with highly quotable, memorable jokes, even if said jokes are toned down just a wee bit compared to the first movie. There’s no laughable CGI projectile vomiting in the sequel, I’m afraid.

The only gripe with what’s otherwise a pretty strong storyline for a sequel like this, is that it feels like the studio decided that the movie ran too long, which it kind of does, stretching itself to a nearly two-hour runtime. Because of this, the studio clearly wanted it cut down, which resulted in a rather abrupt ending, even more so than the first movie. Considering how much this sequel wants to be about the looming scenario of exiting Barden University, it’s disappointing that Pitch Perfect 2 didn’t take the proper time to realize its denouement. Once its big climax is over, there’s one more silly scene, and then the credits roll. It smells of a forced edit to meet a studio-mandated runtime of under two hours.

Still, that’s just one issue with an otherwise very strong comedy story. Pitch Perfect 2 is both deeper and more inspired than its predecessor, without at all sacrificing the girlish glee and memorable comedy that audiences are no doubt coming for most of all.

Elizabeth Banks makes her feature directorial debut with Pitch Perfect 2, after a long career as a comedy actress. Banks apparently has a whole lot of hidden directing talent as well, since Pitch Perfect 2 is put together with an incredible degree of charm and polish.

Banks wonderfully emphasizes the bond between the Bellas in a slew of emotional scenes. I can’t give away these scenes, but rest assured that they’re pretty powerful, especially for Pitch Perfect fans. Even then however, the way that Banks frames comedy-driven scenes is equally amazing. This is of course on top of grand, especially ambitious acapella sequences, which makes sure that the soundtrack keeps pace with the great storytelling and humour, while giving the sequel a fantastic sense of increased scale. 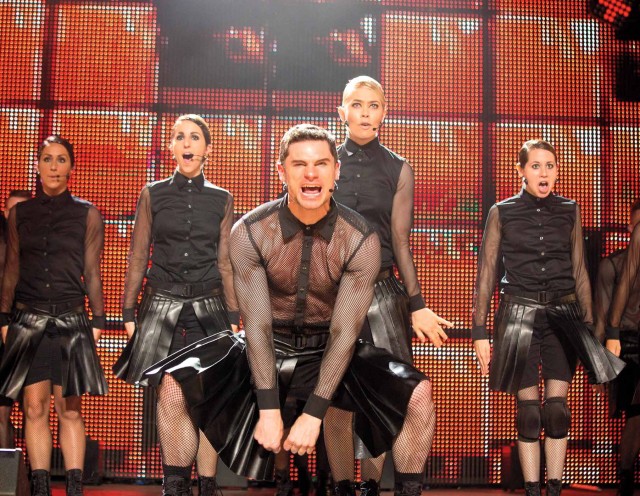 Banks already served as a producer on the original Pitch Perfect, so it’s unsurprising that she has a lot of knowledge about how to make a sequel like this work. She balances all of the working parts of the sequel with aplomb, on top of adding new elements that make the second movie all the more appealing. Rest assured as well that Banks’ direction helps the actresses sell plenty more quotable jokes and scenarios as well. As with the original, fans will be quoting this sequel pretty passionately.

The way that Pitch Perfect 2 so easily blends heart, humour and spectacle presents all sorts of potential for Banks as a budding director. She’s taken a sequel to a movie that had no right to be as good as it was, with said sequel potentially not even having the right to exist, and turned it into something truly special, perhaps even more special than the first movie!

Pitch Perfect had a great soundtrack… For 2012. Sure, some of the original movie’s songs hold up, but a good chunk of the tunes from the first movie are no longer relevant, with the soundtrack immediately dating it.

Pitch Perfect 2 has a fantastic soundtrack in turn, and one that feels a little more based on universal hits than what’s at the top of the pop charts in 2015. It also makes an added effort to vary its genres of songs a bit more, resulting in a more ambitious and crowd-pleasing soundtrack overall. Sure, there’s a couple of songs that will probably be forgotten in a couple of years, but the soundtrack itself is still great, and well worth purchasing on CD for fans of the movie. Again, I won’t go into detail about which songs are featured, but you’ll have quite a lot of fun with them.

Pitch Perfect 2, like its predecessor, is yet another unlikely triumph for female-driven comedies. Any viewer can enjoy the movie for its themes and humour, whether or not you get anything from the soundtrack. Those actively hoping for more fun acapella pop ballads will definitely not be disappointed however, especially with the added effort made to diversify the songs, and make them less rooted in simply what’s popular in 2015.

Elizabeth Banks also proves quite a revelation as a director here, taking everything great about the original Pitch Perfect movie, and pushing it even further. Not only that, but she also grounds the movie with some surprisingly well-executed scenes that make the Bellas feel a little more human and relatable than they were before. The heart doesn’t come at the expense of the entertainment though, making Pitch Perfect 2 succeed as both a sisterhood drama, and as a light-hearted comedy.

Anyone seeking an effective feel-good flick, regardless of their age or gender, would do well to check out Pitch Perfect 2. If you’ll forgive the pun, it’s a sequel that truly sings!

Pitch Perfect 2 Review
Pitch Perfect 2 is not only another huge unlikely success, but ultimately winds up being even better than its predecessor! The infectious soundtrack and quotable, hilarious comedy is intact, brought together by a beautifully poignant, climactic chapter for the Bellas.
CHARACTERS95%
PLOT90%
DIRECTION90%
MUSIC & SOUNDTRACK90%
THE GOOD STUFF
THE NOT-SO-GOOD STUFF
2015-05-17
91%Overall Score
Reader Rating: (0 Votes)
0%