After the rather frustrating wheel-spinning that Game of Thrones delivered last week, “Unbowed, Unbent, Unbroken” got the show on track again this week, with a far more interesting and engaging episode.

We begin by checking up on Arya again, who is still having a grand old angsty time in the House of Black and White. She still doesn’t quite understand much of what goes on with the Faceless Men, facing more failed attempts at playing the Game of Faces with both The Waif and Jaqen H’Ghar. We do get some added insight into the game though, with the object clearly being to convincingly lie, even under painful duress. 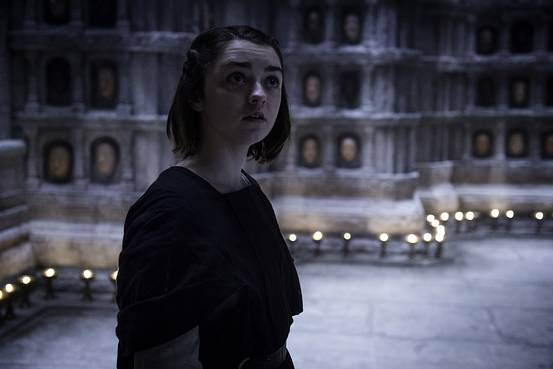 Later on, Arya then talks to a sickly girl who was taken to the House of Black and White, and gives her the waters that allow her to end her life, after lying about being a sickly girl that was cured by those same means. Witnessing the act, Jaqen H’Ghar takes her to the chamber where all of the faces are stored from those who died in the House. He then tells Arya that she is not ready to become no one, but is in fact prepared to become someone else.

There’s still a whole lot of mystery surrounding the purpose of the Faceless Men, and what role that Arya will ultimately serve for them. Nonetheless, the show presented some interesting ideas here, and finally gave Arya a sense of moving forward into an interesting new role. It seems like Arya may not ultimately end up joining the Faceless Men, but might she become something else powerful and important?

Things also finally move forward with the Myrcella plotline in Dorne, with both Jaime and the Sand Snakes closing in on her. Myrcella has apparently struck up a romance with Trystane Martell, in yet another original story element unique to the show that wasn’t in the source novels, and that kind of came out of nowhere. Likewise, while there is a pretty cool fight between Jaime/Bronn and the Sand Snakes, Areo Hotah simply arrives and arrests everyone, including Ellaria. 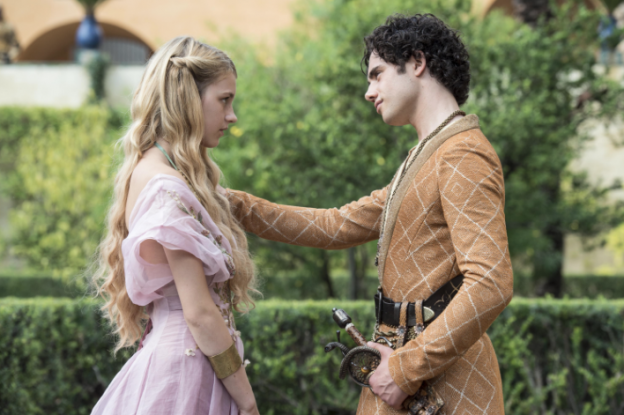 Once again, it felt like Dorne was really short-changed, even though they’re supposed to be playing a sizeable part in Season Five. I get the feeling that they won’t be making any real movement until towards the end of the season, unfortunately, with the fate of Myrcella potentially spilling out into the already-confirmed Season Six too.

Even a short side step with Tyrion and Jorah felt more interesting, even if the show also seemed to brush aside Jorah contracting Greyscale at the end of last week’s episode. The two run afoul of slavers and are captured. Tyrion manages to talk his way out of the situation however, including the rather pressing issue of the slavers wanting to castrate him and sell his cock to a merchant because dwarf cocks are good luck (that’s a thing?!), though in the process, he appears to doom Jorah to the newly re-opened fighting pits. Still, it does keep the two on track for their trip to Meereen, and it was a nice way to demonstrate that Tyrion still has quite a lot of charisma!

Yet again though, Daenerys was entirely absent from this episode, which was especially disappointing, considering her big marriage proposal from last week. It probably couldn’t be helped though, with Emilia Clarke no doubt being tied up with shooting on Terminator: Genisys or something.

Also surprising was the complete omission of The Wall. I’m aware that Jon is riding to make contact with the Wildlings at present, but it was a bit surprising that there wasn’t a live update of Stannis’ march to Winterfell. The sequences at The Wall have been among the best of Season Five at this point, surprisingly, and their absence was felt here as much as that of Daenerys. 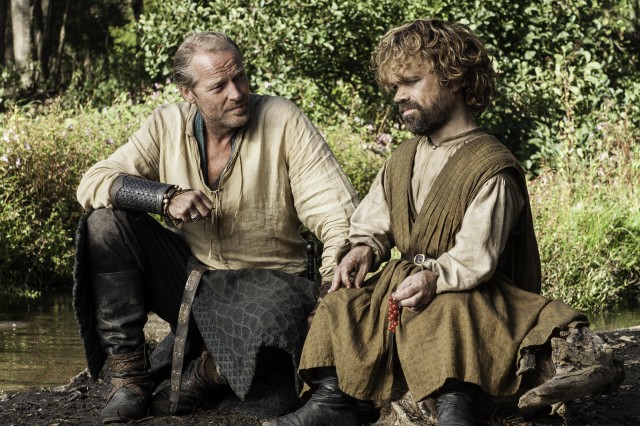 After entirely sitting out last week, it was King’s Landing that got the biggest developments for the most part, with Olenna returning to grill Cersei about the arrest of Ser Loras by the Sparrows. This made for a wonderfully tense conversation, and it was awesome to see Olenna make a return, even though this was just the latest in an entirely original scenario for the show, one that wasn’t present in the books.

This also leads to a pretty surprising turn, at least if you haven’t read the books, where Loras is given a hearing by the Sparrows, and both Margaery and he lie about Loras’ homosexual tendencies. After Olyvar is then brought in however, he testifies against Loras, claiming that he slept with him. The outrage by Margaery at the accusations then ends with not only Loras being put on trial, but Margaery being arrested! Again, this may not shock people who have read the books, since Margaery is also arrested in them, albeit under different circumstances. For people who only watch the show however, it was a perfect twist!

So, that was Cersei’s plan all along. She used the Sparrows to try and remove Margaery, and no doubt re-assert her power over Tommen. Damn! Like I said though, this was a very satisfying payoff to Cersei’s scheming, and it will be very interesting to see how Margaery gets out of this bind, or if she gets out of it at all. Better still is that Cersei didn’t even need Tywin for this plot, and may be becoming the new most dangerous person in King’s Landing!

Also a big development at King’s Landing was Littlefinger’s apparent plot coming to light. Littlefinger has a brief and mostly pointless exchange with the Sparrows about his brothel running, but things really get good when he makes contact with Cersei. Littlefinger tips her off that Roose is going to marry off Sansa to Ramsay, who has now been made a true Bolton. Cersei is infuriated at first, but Littlefinger proposes that he be allowed to lead a group of knights to take out both the Boltons and Stannis, who is currently marching toward them. Should Littlefinger succeed, he then wishes to be named Warden of the North. Cersei agrees to the condition, so long as she’s also brought Sansa’s head. Of course. 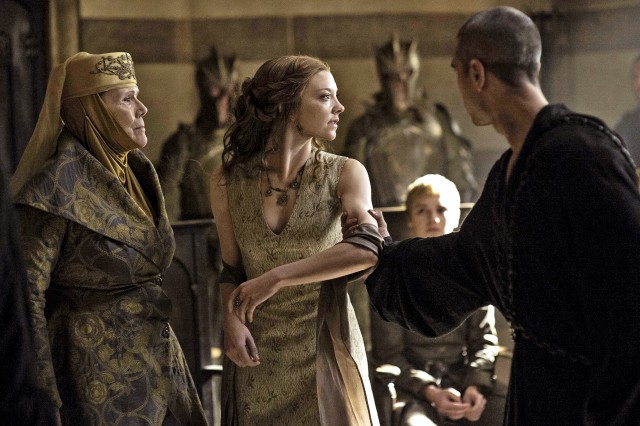 This was another fantastic payoff to what’s otherwise been a huge grey area with Littlefinger. Was he truly loyal to the throne the whole time? Did he just want the North, and was willing to do anything for it? Or, is this just another step to actually hand the North over to Sansa, and kick off some sort of spectacular undoing of Cersei? It’s anyone’s guess, making even this reveal feel like a mystery unto itself. It was another great development that injects more excitement into the season.

Finally, over in Winterfell, Sansa is married to Ramsay, and the wedding night is predictably less than glamourous. Theon is made to watch as Ramsay violently takes Sansa’s virginity, and the episode ends on this rather disturbing scene.

Now, some have taken issue with this scene, saying that the show is perhaps going too far, but honestly, I thought it was appropriate. I can see why some people were bothered by that infamous rape scene between Jaime and Cersei last season, since that was kind of out-of-character for Jaime, and did feel like it was only inserted there for shock value. In the case of Ramsay though, this shouldn’t be a shock. We’ve firmly established that Ramsay is a twisted, sadistic asshole, who absolutely craves overpowering weaker people. It seemed only fitting that he would immediately assert that power over Sansa, aggressively reminding her that he’s taken her home, and now her domestic status, and making Theon watch was another way to torment the broken fool he’s already made as his man-slave. It was chilling, but also fitting, starting what seems like a doomed rule for the Boltons on a nicely harrowing note. 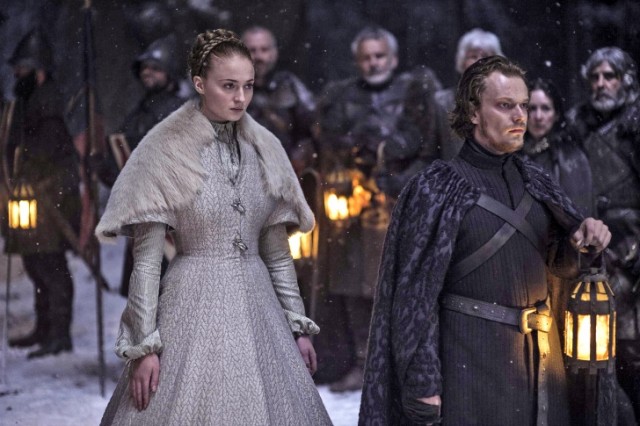 In any case, “Unbowed, Unbent, Unbroken” gave Game of Thrones a much-needed shot in the arm after last week, finally taking some of these drawn-out developments and pushing them to exciting new territory. As Cersei’s move against Margaery is made, and the pieces look to be falling into place for a bloody war in the North, it looks like more heads are about to roll. I just hope that Dorne can actually start making itself useful soon.

Game of Thrones 5.6: "Unbowed, Unbent, Unbroken" Review
Game of Thrones found its footing again this week, delivering a far more interesting and exciting episode that finally laid bare some of the many mysteries being juggled, and put Margaery in a pretty tight spot!
THE GOOD STUFF
THE NOT-SO-GOOD STUFF
2015-05-19
88%Overall Score
Reader Rating: (1 Vote)
86%