NOTE: Some minor spoilers from the first season of, “House of the Dragon” may be present in this review. That said, the review is written to accommodate those who haven’t yet watched the season, and as such, will avoid discussion of major plot turns.

It’s hard to believe it’s been three years since the conclusion of HBO’s ultra-popular fantasy drama series, Game of Thrones, an event that shocked, angered and underwhelmed many viewers. Despite that series’ eventual fall from grace in the eyes of many fans however, HBO nonetheless pledged to proceed ahead with expanding the world of Westeros beyond the vision of author, George R.R. Martin’s original A Song of Ice and Fire novels. This led to the development of numerous spin-offs for both the mainline HBO channel and HBO Max streaming platform, some of which have already been aborted, though one has since stood tall to lead the charge in turning Game of Thrones’ world into a bona fide shared universe; House of the Dragon.

House of the Dragon feels like the perfect foundation for an entire franchise full of spin-offs set within George R.R. Martin’s brutal fantasy realm as well. This prequel/spin-off series remains inspired by a tie-in novel penned by Martin, Fire & Blood, one that serves as the chronicle behind the rise and fall of one of the most noteworthy noble houses in Westeros; House Targaryen. Yes, the very same House Targaryen that eventually gave us Game of Thrones’ Daenerys Targaryen, a figure that’s now among the most controversial anti-heroines in television history. It’s small wonder why Daenerys was ultimately destined to make such waves among audience tastes as well, considering that she comes from a family that’s practiced enough scheming, backstabbing and bloodthirstiness to sustain their own self-contained Game of Thrones solely within the Targaryen family tree. This is definitively proven by House of the Dragon, a series that not only returns Game of Thrones’ world to top form, but also proves that there’s plenty of material to mine in Game of Thrones’ distant and detailed canonical history. 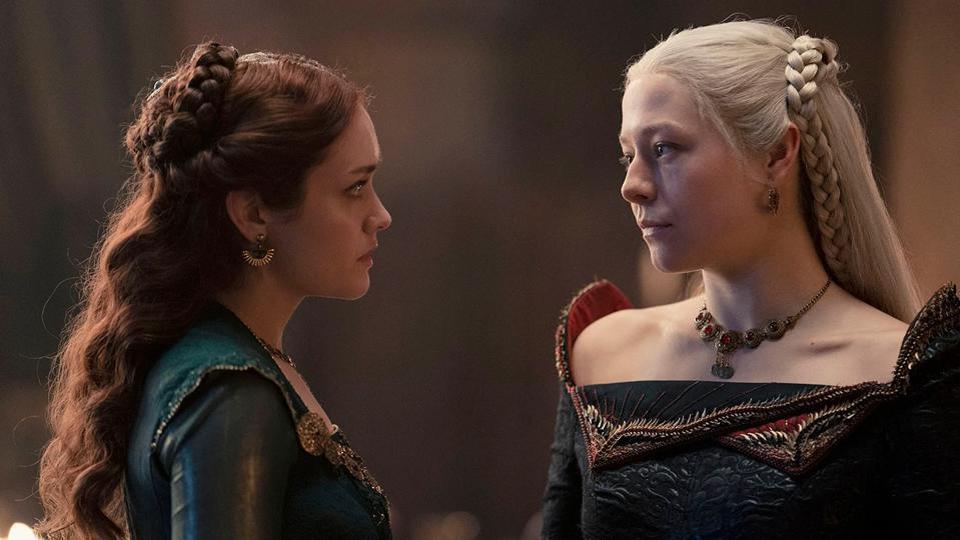 One caveat to House of the Dragon however is that it’s undeniably reduced in scale compared to the original Game of Thrones saga. The overall pacing behind House of the Dragon is significantly slower to boot, which makes sense, as it almost entirely unfolds from the perspective of just one noble family, rather than several noble families that are spread across multiple fictional nations. Thus, there’s no impending Long Night, no true existential threat to the realm at large, and no threat of all-consuming world war constantly hanging over the all-important Iron Throne. Rather, the fate and stakes behind the series rest entirely within the family that has already worn the Iron Throne, facing no real threat to it at this point in Westeros’ history, and instead facing a very different kind of premonition; The only thing that can truly destroy the House of the Dragon is itself. These events sustaining House of the Dragon unfold around 200 years or so before Game of Thrones takes place.

Further raising these stakes is the fact that the Targaryen’s are one mighty big family, and this first season of House of the Dragon even sees a whole new generation of Targaryen’s get gradually born into that family, first beginning with the unexpected crowning of Paddy Considine’s patriarch and king, Viserys I Targaryen. Winning the Iron Throne on a technicality, before House of the Dragon begins exactly ten years into his royal tenure, Viserys makes every effort to rule nobly and justly, on top of being a positive example to his daughter, Princess Rhaenyra Targaryen, played as a teenager by Milly Alcock, and as an adult by Emma D’Arcy, whose sole surviving presence threatens to upend centuries of tradition by courting the idea of a female ruler, a milestone originally denied to Viserys’ cousin, Rhaenys, played by Eve Best. Thus, right from the jump, Viserys’ reign is marked by controversy and unrest, and that’s just the beginning for House Targaryen’s multiplying problems throughout House of the Dragon’s first season.

I’ve made the crack throughout my personal life of comparing House of the Dragon to another highly successful HBO series, Succession, going as far as to call it, “Succession: Fairy Tale Edition”, though this really does feel like the best way to describe the series to the uninitiated; Much like Succession’s highly powerful and equally dysfunctional Roy family, the Targaryen dynasty behind House of the Dragon plot, conspire and betray one another amid their own subjective ideas surrounding where to steer the legacy of the most powerful family in the realm, a family that’s all but destroyed by the time of Game of Thrones. This calls to mind another highly successful prequel series of recent years, AMC’s recently-concluded Breaking Bad spin-off, Better Call Saul, a similarly beloved and well-executed offshoot, and one that succeeds for the same reason that House of the Dragon does; Rather than shy away from the tragic events of its parent series, those events are instead wielded like an ominous ticking clock, constantly reminding audiences that, no matter what these people do with their legacies, their ambitions are ultimately doomed.

“The themes of tragic love and doomed legacy constantly run at the heart of House of the Dragon, impeccably bolstered by its superb characterization and enthralling performances.”

And yet, like Better Call Saul, House of the Dragon’s inevitable doom for its subjects doesn’t deflate the drama, but instead heightens it. Thanks to very smart, unpredictable and deliciously vicious storytelling, House of the Dragon quickly allows viewers to invest in its many charismatic, if mostly reprehensible characters, with Considine’s Viserys feeling like the exception to a mostly crooked house, rather than the rule. Despite Viserys’ efforts to hold his house together, for example, it often feels like the true power behind House of the Dragon’s Targaryen family comes from Viserys’ outcast brother, Prince Daemon Targaryen, played by Matt Smith. Daemon swaps Viserys’ innate sense of diplomacy for impulsive, uncompromising action, thus pulling back the veil on the true rot behind the Targaryen family with giddy abandon, as Daemon almost makes sport of unmasking just how internally vile and depraved his family truly is.

The frequently tense, yet subtly loving brotherhood shared between Viserys and Daemon is also effectively mirrored by their would-be successors, Princess Rhaenyra, and her best friend, Alicent Hightower, played as a teenager by Emily Carey, and as an adult by Olivia Cooke. Initially the closest of companions, a combination of circumstance and manipulation eventually splits Rhaenyra and Alicent onto separate, adverse paths, paths also overseen by the wild card machinations of Alicent’s father, Ser Otto Hightower, played by Rhys Ifans. Otto serves as Viserys’ Hand of the King, a shady, yet undeniably brilliant advisor who seems to have his own designs for the realm, and just as his treachery inevitably strains his relationship with Alicent, so too does it infect much of House Targaryen at large. The themes of tragic love and doomed legacy constantly run at the heart of House of the Dragon, impeccably bolstered by its superb characterization and enthralling performances, with Considine being a particular standout as an increasingly ineffectual, but still well-meaning ruler, one that seems to fall apart even more with every passing year.

The passing of years is also crucial to House of the Dragon’s storytelling throughout its first season, as it unfolds across a handful of time jumps. As I mentioned, there are two separate actresses playing both Princess Rhaenyra Targaryen and Alicent Hightower, and this is because this debut season periodically skips ahead in time every few episodes, chronicling the youth and eventual ascension of both women, as well as the birth of their children. Eventually, the series does settle on a central time period, and the showrunners have since promised that there will be no more time jumps in future seasons, but before that happens, it can be easy to lose track of the series’ rather dense canon during this first season. Granted, dense canon should be nothing new to Game of Thrones fans, or hardcore fantasy enthusiasts in general, but the necessary evil of painstakingly establishing years’ worth of complex relationships at the foundation of House of the Dragon can sometimes create more confusion than it has to, especially if you’re watching the series weekly, as first-run viewers would have been, and not just binging the whole season in one go via HBO Max, or Crave for us Canadians.

Still, as much as the storytelling can feel a little messy and drawn-out at times, the steady, sizzling boil of seeing Rhaenyra’s and Alicent’s children come of age right on the cusp of civil war nonetheless remains riveting. As Alicent is quickly forced into the position of being Dowager Queen to preserve Targaryen rule, she ends up bearing the necessary sons to succeed Viserys, those being Aegon II Targaryen, played as a teenager by Ty Tennant, and as an adult by Tom Glynn-Carney, and Aemond Targaryen, played as a child by Leo Ashton, and as a teenager/adult by Ewan Mitchell. Rhaenyra, meanwhile, bears another batch of sons, albeit sons smeared by an apparent slander about their origin, in turn teasing one of the major historical events behind Westerosi fiction; The Dance of Dragons, essentially the internal war that led to the ultimate collapse of House Targaryen during the height of its power.

Through substituting mass political intrigue for the ambitious, but ultimately futile agendas of just one family and their allies, House of the Dragon successfully revives the winning formula that originally spurred the world to fall in love with Game of Thrones. Granted, House of the Dragon is a little slower and much more contained than its parent series in terms of its pacing and scope, but it’s a strong and true successor to Game of Thrones just the same, sporting the same sadistic violence, the same degenerate sexuality, and the same sickly satisfying unpleasantness that so often defined HBO’s fantasy darling of the 2010’s. Its all-new cast has quickly captured the hearts of new and returning viewers as well, and for good reason, as House of the Dragon sports some of the most compelling performances in all of television this year, with its cast and crew sure to garner no shortage of Emmy recognition in the years to come. 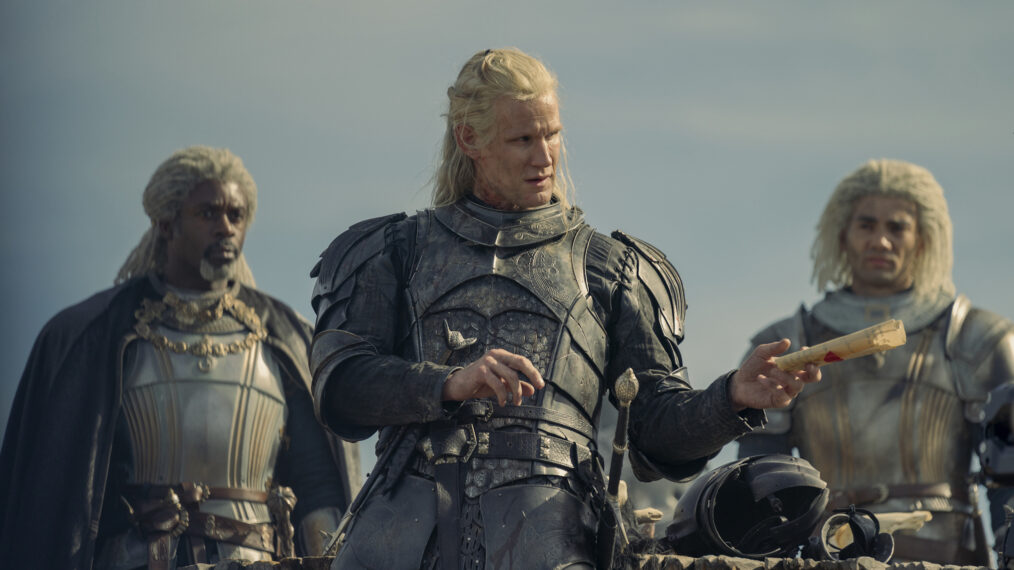 It’s easy to be cynical about the prospect of a literal deluge of Game of Thrones spin-offs that seem to be headed our way throughout this coming decade, and no doubt beyond, but if House of the Dragon is any indication of what we can expect from Westeros’ aggressive expansion into spin-off media, perhaps we can breathe a little easier than we originally anticipated. House of the Dragon’s debut season is a resounding success in virtually every way, reminding audiences of why most of Game of Thrones was so fantastic, while brilliantly refocusing the franchise’s scale around one especially savage family, and how they will inevitably bring about their own demise. The end of the season promises that the best is yet to come for House of the Dragon as well, further reinvigorating the future of Westeros through an increasingly captivating chronicle of its past, and beating the odds with the triumphant declaration that Game of Thrones is back, ready to rule the HBO realm once again!

House of the Dragon: Season 1 Review
House of the Dragon's first season is a sadistic, scheming delight that restores the world of Game of Thrones to its former glory, successfully refocusing the franchise around one of its most tragic and brutal families.
THE GOOD STUFF
THE NOT-SO-GOOD STUFF
2022-11-03
90%Overall Score
Reader Rating: (0 Votes)
0%