NOTE: Spoilers from throughout the second season of Agents of S.H.I.E.L.D. are present in this review

Boy, what a difference a year makes! Agents of S.H.I.E.L.D. may have had a bumpy start with the rather uneven Season One, but the Marvel Cinematic Universe-set TV series has rebounded in a spectacular way with the fresh, engaging and unpredictable Season Two. At long last, this series is truly living up to its potential, and has become one of the best comic book-inspired dramas on TV at present.

After the show started to hit its creative stride towards the end of Season One, following S.H.I.E.L.D. collapsing in the wake of the events of Captain America: The Winter Soldier, Season Two ran with this direction to great effect, having the organization still in ruins, and having Nick Fury leave Coulson in charge of what’s left of S.H.I.E.L.D.’s old ways. Assembling a ragtag outfit of scattered agents, along with his old crew, Coulson continues to take the fight to HYDRA at the start of the season, but later on, that becomes the least of his problems, when his outfit, along with another rogue S.H.I.E.L.D. splinter, discovers an entire super-powered race in the Inhumans.

The introduction of the Inhumans, a key mutant race in Marvel Comics lore, to the Marvel Cinematic Universe via Agents of S.H.I.E.L.D. was certainly a bold and ambitious move, one that could have backfired pretty badly. Fortunately, despite the Inhumans not getting their own feature film until all the way in 2019, the show introduced them to Marvel’s shared live-action universe with incredible results! The twist of making both Skye and Raina end up being Inhumans worked far better than expected, and the season even managed to wrap around with a big surprise villain by the season finale, despite all signs pointing elsewhere. It resulted in a season rife with great twists and turns, and one that made Agents of S.H.I.E.L.D. continually rewarding to tune in to on Tuesdays throughout its second season.

Equally inspired is the idea behind making the Inhumans sort of the MCU’s stand-in for mutants and the X-Men, which the season finale’s sequence of Terrigen leaking into the water supply seemed to fully tease for Season Three. The movie/primetime TV rights to X-Men are currently sitting pretty at 20th Century Fox, and don’t look to be leaving that studio anytime soon. This not only prevents Marvel from incorporating the X-Men, their villains and supporting characters, and all team derivations thereof into the MCU, but also prevents any mention or use of mutants in general, including even the term itself! Thus, in order to push forward the pivotal development of mutants, a key component of the Marvel Universe, Marvel has decided to make the Inhumans serve the purpose of mutants in the MCU instead. It’s clever, and it should hopefully help to service the 2019 movie, which will no doubt instead focus on the well-established Inhumans from Marvel lore, such as Medusa, Karnak, Black Bolt, Lockjaw and Gorgon.

Before the Inhumans even make their appearance however, Coulson continues his campaign against HYDRA. who appear to be racing to the same mysterious message that Coulson keeps compulsively carving into every solid surface he can. The season’s front half is all about deciphering this message, which turns out not to be a message at all, but a map to a hidden city. The whole idea of questioning Coulson’s sanity was bound to go nowhere, but the thrills were nonetheless frequent and exciting.

Also exciting was some of the uncharted territory that characters had now been pushed into. Skye now had to buckle down and get serious about her S.H.I.E.L.D. training. Fitz was suddenly struggling to make use of his brilliant mind, after his near-death experience in Season One’s finale. Simmons not only went undercover with HYDRA, but seemed to develop a hatred of enhanced individuals. It was exciting to see the previously upbeat personalities of the show get pushed to some surprisingly dark places in Season Two, especially with the aftermath of Ward’s betrayal factoring in. Likewise, new additions like Hunter, Mack and Bobbi (a.k.a. Marvel heroine, Mockingbird) bolstered the team’s ranks very nicely, even with the slight detour that Mack and Bobbi take later in the season, when the other S.H.I.E.L.D. comes into play.

The only character who ended up short-changed in the end was Trip, who initially appeared to be Ward’s unofficial replacement in the team dynamic, before Mack, Hunter and Bobbi also joined Coulson’s crew. Trip’s only purpose was to be a casualty to the Terrigen Mist that mutated Skye and Raina, a prop meant to show that Terrigen is lethal to ordinary people who aren’t dormant Inhumans. Considering that Trip ended up betrayed by Garrett in Season One, it’s strange that the show didn’t do more with him before he was killed off. He was even kind of charming. Honestly, Trip’s loss kind of felt like a waste.

Fortunately, after Coulson beats HYDRA to the Inhuman city, Skye starts to struggle with her newfound abilities, specifically the destructive ability to harness and generate vibrations. She was also outed as Daisy Johnson, a.k.a. Quake from Marvel Comics lore, and this also meant that her father was Calvin Zabo, a.k.a. Marvel villain, Mister Hyde. Twin Peaks’ Kyle Maclachlan debuted as Skye’s father in Season Two, and while he was a slightly goofy character, Maclachlan nonetheless proved to be a season highlight! Cal’s intentions were almost never clear, and he seemed to range from bloodthirsty murderer to misunderstood victim, seemingly at random. It made for a challenging portrayal that Maclachlan just nailed, even if he didn’t fully become Mister Hyde until the season finale. Still, his character’s happy ending was very fitting and satisfying, even if it meant erasing the memory of his wife and daughter.

Speaking of Cal’s family, hot damn was this an awesome element of Season Two! After Skye is taken to train with the Inhumans, reuniting with her mother, Jiaying as well, who was revealed to be pieced back together by Cal, the show did a brilliant job of having S.H.I.E.L.D. war amongst itself, as the real threat stirred in the background. It was Jiaying who truly posed the biggest danger, going as far as to murder Gonzalez, the head of the other S.H.I.E.L.D. in cold blood, while also murdering Raina in front of Skye, and that’s after she declares open war on S.H.I.E.L.D.! 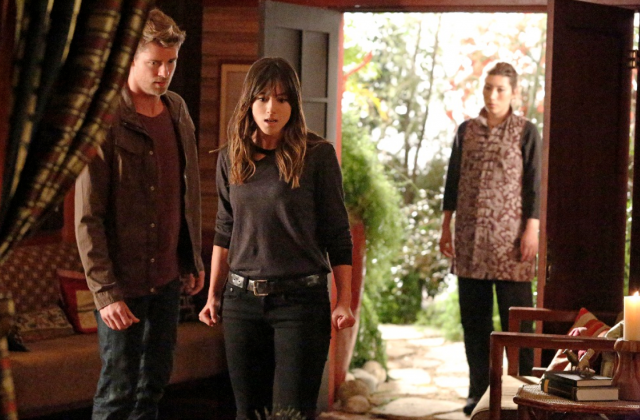 The gradual unmasking of the true threat in Jiaying was amazing, since audiences were wonderfully misled into over-analyzing the warring factions of S.H.I.E.L.D., rather than rightfully distrusting Jiaying, who put together an Inhuman paradise that very blatantly had a disregard for ordinary humans, as demonstrated through their treatment of Cal. Audiences just didn’t put the pieces together until it was too late, much like S.H.I.E.L.D. itself. Fortunately, this led to a huge and epic two-hour season finale, which presented tons of cool action, brilliant resolutions to every plot, and of course, that awesome tease that a lot more powered people are about to start popping up in the MCU soon, and no doubt all over next season.

Also a great tease for things to come was Ward, who eventually breaks out of Coulson’s custody, and, like Cal, tends to constantly have ever-shifting, questionable intentions. Later, we learn that Ward has actually struck up a relationship with former S.H.I.E.L.D. operative, Agent 33, who is eventually cured of her brainwashing by HYDRA, which turns her into a villain earlier in the season, and one semi-permanently stuck with May’s face after a facemask glitch. Even then however, Agent 33 is out for revenge against Bobbi for inadvertently giving her up to HYDRA, which leads to May and Hunter having to try and rescue her, leading to Ward accidentally killing his lover during the rescue. Left with nothing to lose, Ward then closes out the season by vowing to rebuild HYDRA in his own twisted image. Given how dangerous we know Ward is, that absolutely can’t be good!

Agents of S.H.I.E.L.D. became a true edge-of-your-seat show in its second season. It became an excellent blend of super-powered comic book fun, and high-stakes espionage, no doubt achieving the vision it initially set out with. With the introduction of the Inhumans most notably, Agents of S.H.I.E.L.D. finally broke out of being an optional, mostly inconsequential spin-off to the Marvel Studios movies, and instead stood alongside them as its own confident expansion of the MCU. As we prepare for Season Three in the Fall, here’s hoping that Season Two’s bold courage can continue to have this series riding high on excitement!

Agents of S.H.I.E.L.D.: Season Two Review
Agents of S.H.I.E.L.D. finally achieved its true potential with the bold and exciting Season Two, finally standing alongside the Marvel Studios movies as its own fresh, interesting and rewarding expansion of the Marvel Cinematic Universe!
THE GOOD STUFF
THE NOT-SO-GOOD STUFF
2015-05-22
88%Overall Score
Reader Rating: (1 Vote)
89%