NOTE: Spoilers from throughout the third season of Arrow are present in this review

Despite getting a two-year head start over the slew of other DC Comics-inspired shows that debuted during this television season, Arrow felt strangely sloppy in its third season. Where new spin-off series, The Flash rapidly sped to high acclaim and glory, taking Arrow’s place as The CW’s most beloved and watched series this season, Arrow awkwardly stumbled around, trying to find its new place, now that the The CW’s DC Television Universe is starting to expand beyond the confines of Starling City.

The main plot of the season went beyond Green Arrow’s gallery of villains as well, which already seems odd, given the outstanding Deathstroke plot of Season Two. This season, it’s Ra’s Al Ghul and the League of Assassins that are the main villains, despite the fact that they’re generally foes of Batman, not Green Arrow. This kind of led back to Oliver Queen returning to being some sort of awkward Batman stand-in, since the Dark Knight is off-limits on the live-action small screen at present, and brought back some of the show’s early issues from Season One, namely trying too hard to be dark and brooding. 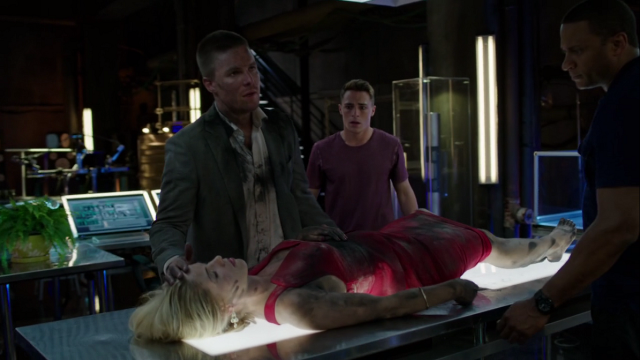 All in all, while you couldn’t call the third season of Arrow bad, since it did have some truly awesome and brilliant episodes, it was most certainly uneven. Due to a season arc that never came together, a season finale that embarrassingly fizzled out with no impact, and a series of almost entirely boring mandatory flashback sequences to encompass the entire season, Arrow fell a considerable distance from its high-quality standard this season, especially considering the epic high point of Season Two.

The season at least got off to a strong start with the shocking death of Sara Lance, something that made for some great material for all of the leads. The loss of Sara, a formerly badass and seemingly unstoppable heroine that was well-established as a valued member of Team Arrow in Season Two, really hit home for audiences as much as it did the characters. It allowed the season to really burst out of the gate on a powerful note, particularly since it finally gave Laurel something useful to do, setting her on the path to becoming the DC Television Universe’s true Black Canary.

The training of Laurel was a bit uneven, even with the inclusion of J.R. Ramirez as Ted Grant/Wildcat, Black Canary’s mentor in DC Comics as well as this series, but her Black Canary portrayal was reasonably good. Katie Cassidy looks the part better than anyone could have imagined upon donning the Black Canary gear, and the fact that she was realistically portrayed as far from a perfect combatant at the start, made for some strong storytelling. Likewise, this also allowed an opportunity for Laurel to bond with her former enemy, Nyssa, who continued Laurel’s training, and actually sculpted her into a pretty capable fighter by season’s end. Not only that, but seeing these women become begrudging allies, and eventually true friends, was very satisfying, assisting both in finding closure at the loss of Sara, even if we know said loss is going to be undone in upcoming DC Television Universe spin-off series, Legends of Tomorrow next year. 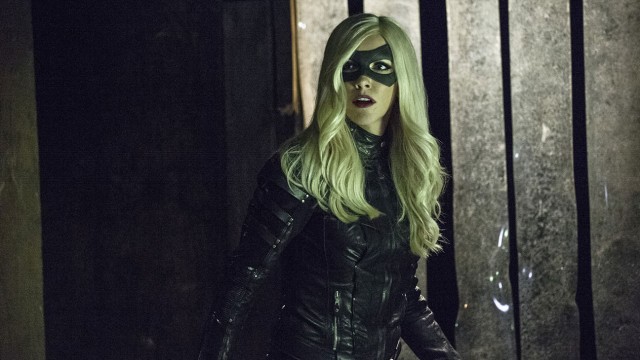 Another high point this season was the midseason finale, which saw Oliver engage Ra’s Al Ghul in lieu of Malcolm Merlyn, who was actually behind Sara’s death, exploiting a drug-addled Thea to do it. Surprisingly, Oliver not only failed, but actually died! When the show picked up again, the supporting cast was given focus, now that The Arrow was absent from Starling City. Diggle, Felicity, Laurel and Roy all got some of their best arcs yet in the series here, now forced to face the ramifications of their crusade, without Oliver to lead them. It was very clever, even if Oliver’s return felt contrived, and a bit unsatisfying, despite Vinnie Jones playing one of the season’s best villains overall during this interim, as strong, thick-skinned Green Arrow villain, Danny Brickwell, a.k.a. Brick.

Some of the lead-in to the final battle with the League of Assassins was good stuff as well. Ra’s Al Ghul gradually putting the squeeze on Oliver, after trying to coerce him into succeeding Ra’s as the leader of the League of Assassins, was great! Things wonderfully came to a head when Thea is almost killed by Ra’s as well, which appears to unite Oliver and Merlyn in a campaign to bring down the League from the inside. This uneasy alliance felt a little too straightforward, but it did result in one of the season finale’s only good developments, which was Merlyn taking over the League of Assassins, after Oliver successfully kills Ra’s in a big final showdown atop Starling City’s dam. 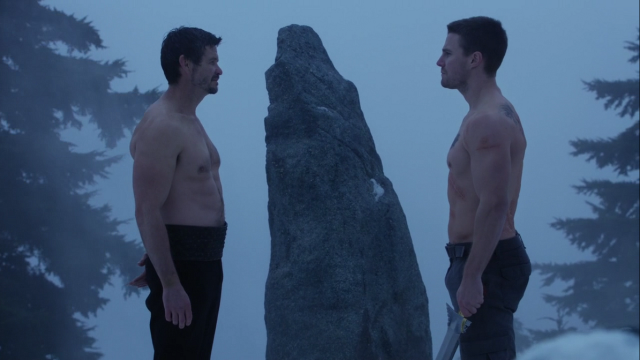 The season finale was a very unfortunate face-plant for the season though, and it was the biggest offender in a considerable list of problems that Season Three faced later on. The season finale was very anticlimactic and disappointing, not to mention extensively contrived, as if all of the numerous arcs that Season Three was juggling were suddenly awkwardly smashing together without rhyme or reason. Worse still is that The Flash doesn’t participate in saving Starling City from imminent doom at the hands of a League of Assassins bioweapon attack, because he’d, “Rather grill Wells”, which was lazy writing, to say the least. Not only that, but Roy completely sits out, since Colton Haynes’ contract wasn’t renewed, making Roy’s development as DC hero, Arsenal amount to nothing this season, after Roy awkwardly fakes his death and leaves Starling City in the lead-in to the season finale. Even Thea trying to chase him down went nowhere, and largely felt like a waste of time.

Speaking of Thea, she spent the early portions of the season under Merlyn’s wing, but inevitably finds out the true nature of her father, namely that he drugged her and made her kill a friend. Despite her hatred of Merlyn, Thea is continually forced to ally with him, particularly now that she’s become a deadly fighter in her own right. It was pretty satisfying to see Thea pick up a bow and take up Roy’s mantle as Speedy (or Red Arrow, which she apparently prefers as a name), even if she sure was trained into a deadly fighter pretty quickly. Even assuming that Merlyn is a great teacher, Thea’s development felt a little rushed and awkwardly paced this season, especially considering the fact that her opinion of Roy seemed to change an awful lot, before she decided that she loved him again, right as he disappeared. Go figure. 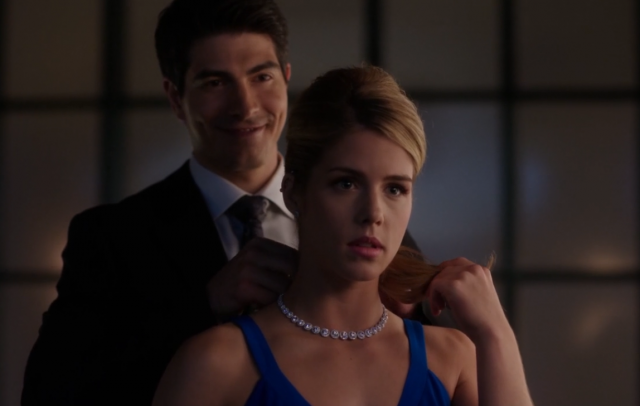 Arrow also made the surprising development of introducing Ray Palmer this season, before he’s size-changing DC hero, The Atom. Ray inherits the Queen Consolidated building, setting up shop for a branch of his multi-billion Palmer Technologies company within it, and also hires Felicity to work for him. Ray serves as both a foil for Oliver and a love interest for Felicity, though beyond being a plot device, he simply seems to exist to keep Felicity out of Oliver’s heart for a while, and start laying a foundation for Legends of Tomorrow.

Fortunately, Brandon Routh was absolutely delightful in this part, and I am looking forward to seeing him play a bigger role in Legends of Tomorrow, but Ray was another character that seemed to come and go as the script demanded, fun as he was. Hell, his attempt to be a hero, using a battle suit called the A.T.O.M. suit (heh), and attempting to reconcile his late fiancee, who was apparently killed during the Deathstroke Army attack at the end of Season Two, felt pretty blatantly like a knock-off of Iron Man’s storyline, only substituting the fiancee for Tony Stark’s guilt over civilian casualties. Hell, Ray’s suit was basically a DC version of the Iron Man suit! I’m a little surprised that Marvel didn’t take issue with Ray’s portrayal here. Maybe it’s because he didn’t drink enough.

The other major figures this season were Maseo and Tatsu Yamashiro, the Japanese family that Oliver is forced with in flashback, after Oliver is smuggled to Hong Kong by Amanda Waller. DC fans know Tatsu as DC heroine, Katana, a mantle that she doesn’t really take up until the season’s penultimate episode, though even she lazily sits out the season finale for a stupid reason.

Anyway, in the present, Maseo is a high-ranking member of the League of Assassins, and often acts as the League’s contact for Oliver. There’s supposed to be a big arc with Maseo and Tatsu about the death of their son and how it drove them apart, but this takes far too long to happen. Most of the flashbacks feel tedious and forced, and just re-tread themes with Oliver that we already know, even when they try to capture the beginning stages of Oliver’s dark side, after his experiences on Lian Yu. The heartbreaking moment when Tatsu has to kill Maseo in the season’s penultimate episode was felt, but these two feel like they were tossed in to simply serve as plot devices, much like Ray, and little else. 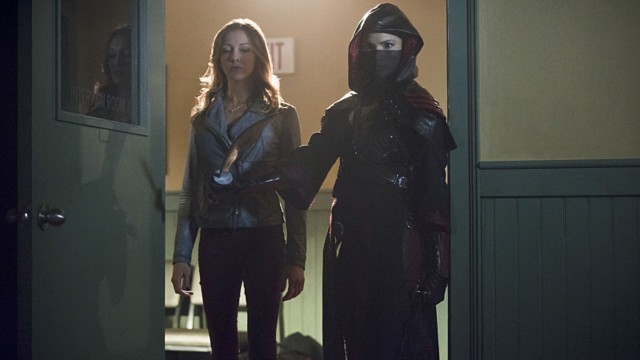 At the very least, Arrow’s crossover episode with The Flash, “The Brave and the Bold”, was pretty much the only time that this series elevated itself above its spin-off this season. This was an excellent team-up episode that showcased beautiful potential for future team-up efforts in the DC Television Universe, with the other guest stints of The Flash characters on Arrow also working pretty well later in the season… Except for Barry freeing his Starling City friends and dashing in Nanda Parbat during the season finale. That made no sense.

Overall though, Arrow felt like it disappointed this season, with an uneven series of episodes that never fully came together. Some episodes were awesome, others were just ok, and a couple were kind of bad, but there was never any consistency to the entertainment value or logic behind Season Three. It just felt like the show needed to find itself again, and it didn’t do it this season. 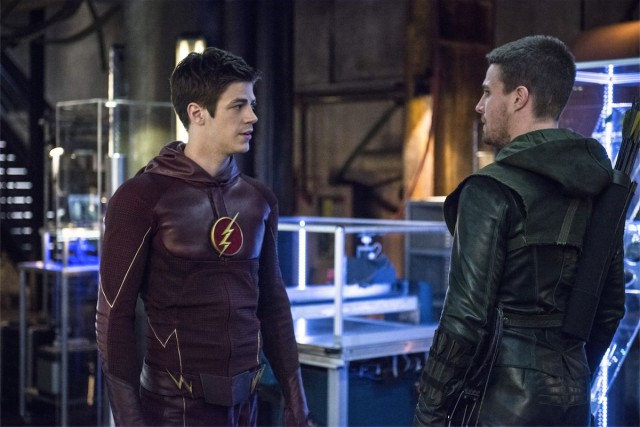 Still, I don’t blame Arrow for getting a bit lost in Season Three. The introduction of The Flash no doubt merited a revised direction, which became even more imperative with the further increased scale of Legends of Tomorrow. Unfortunately, The Flash turning out so wonderfully in its debut season seemed to further hurt Arrow in Season Three, making it look even sloppier in comparison. The show felt like it lost track of itself, and hopefully, Season Four gets things back on track, with a more consistent and reliable vision that isn’t constantly worrying about servicing something else.

Arrow: Season Three Review
Arrow awkwardly seemed to lose track of itself in Season Three, resulting in an uneven, over-stuffed season that had some awesome episodes, but also some pretty lousy episodes, along with a conclusion that really failed to resolve everything well.
THE GOOD STUFF
THE NOT-SO-GOOD STUFF
2015-05-23
73%Overall Score
Reader Rating: (1 Vote)
73%